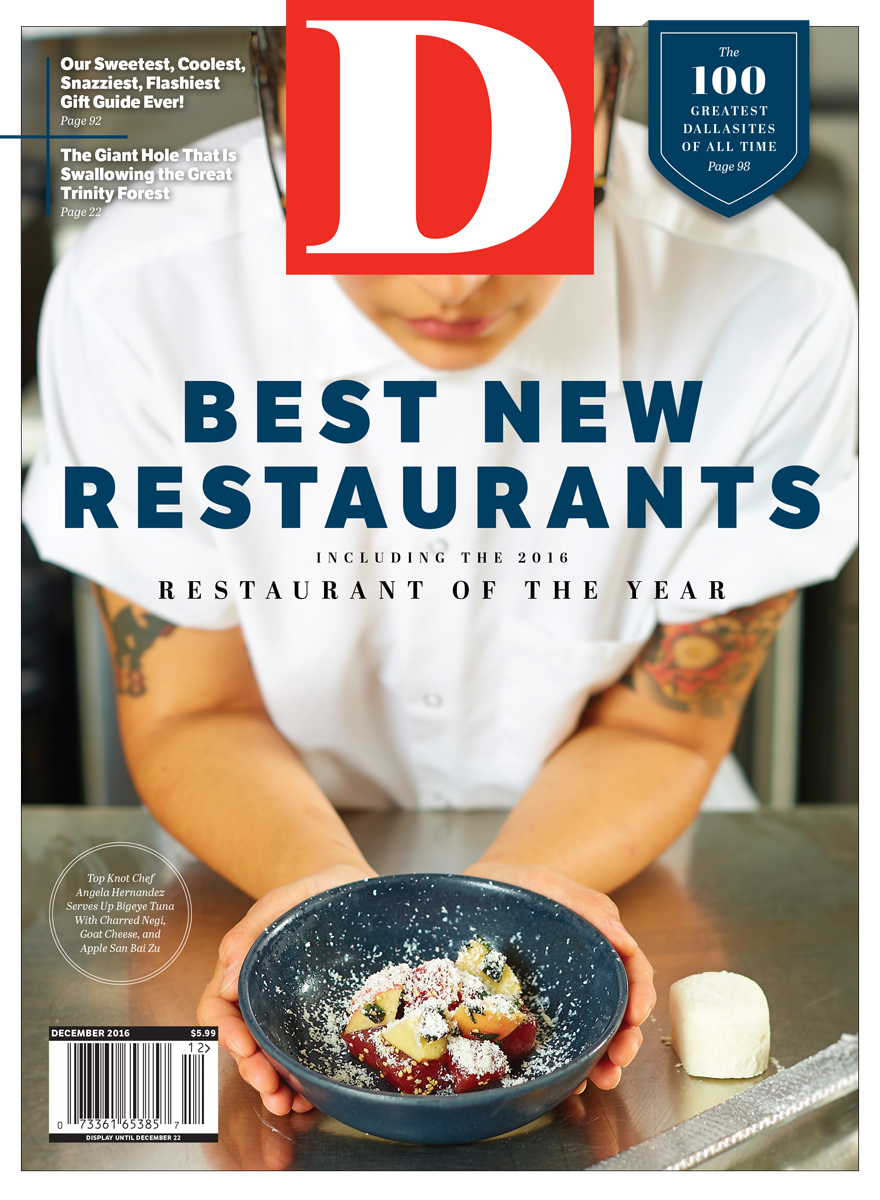 By Eve Hill-Agnus | 5 years ago Local chefs found new ways to surprise and delight us in a year marked by movement.
Subscribe

By Peter Simek | 5 years ago He suffered through his parents' murders, and then moved home to make movies.

By D Magazine | 5 years ago We nominated 302 of the city’s most intriguing and influential people, then opened it up to an online vote. Turns out, you folks really like sports.

By Kathy Wise | 5 years ago Allison Mitchell's winning handbags come in all shapes, sizes, and skins.

By Zac Crain | 5 years ago Survive made the disquieting soundtrack 2016 deserved.

The Fire Marshal Wants to Shut Down Our Party

By Peter Simek | 5 years ago The arts community is feeling the heat as the city cracks down on illicit gatherings.

By Stephanie Quadri | 5 years ago Because you can't wear an ugly holiday sweater to a Park Cities party.

Deck Yourself Out With These Stunning Sparklers

By Stephanie Quadri and Kathy Wise | 5 years ago Diamonds and rose gold are a few of our favorite things.

By Jan Strimple, model, fashion event producer | 5 years ago He made Neiman Marcus a national player in luxury retail and made our city a more stylish place in the process.

The Conspiracy Behind the Dallas 100

By Nancy Nichols | 5 years ago Transform your hectic day into a tranquil Marrakesh night.

By Mike Rhyner, Host of The Ticket’s The Hardline, No. 15 Greatest Dallasite | 5 years ago The Oak Cliff native made an outsized mark on music.

By Virginia McAlester | 5 years ago The preservationist and author weighs in on her all-time favorite Dallasites.

By Eve Hill-Agnus | 5 years ago Here's where you'll find the egg tarts and matcha cookies you've been looking for.

The Weird, Wonderful World of the Neiman Marcus Christmas Book

By S. Holland Murphy | 5 years ago The retailer has shocked and delighted customers for 90 years.

By D Magazine | 5 years ago The photographer and creative director talks about his favorite areas of our city.

Poizon Ivy Is the DJ Behind Those Basketball Beats

By Zac Crain | 5 years ago Ivy Awino spins for both the Wings and the Mavericks.

A Giant Pit Is Eating the Trinity Forest

By Tim Rogers | 5 years ago How much will we sacrifice to build the new Byron Nelson golf course?

By Christiana Nielson | 5 years ago Now the attorney and housing activist is turning his sights south.

Everything You Thought You Knew About DISD Is Wrong

By Eric Celeste | 5 years ago It is actually a model of reform. But that may soon change.

There Is Something Worth Saving at Valley View Mall

By Michael Friebele | 5 years ago Brenda Stubel wants to preserve a thousand tiny pieces of the Sanger-Harris mosaic.

By Peter Johnson, Civil rights activist | 6 years ago The woman who integrated DISD.

By Mico Rodriguez, Co-founder of Mi Cocina and founder of Mesero | 6 years ago The woman behind El Chico.

By Skip Bayless Co-host of FS1’s "Skip and Shannon: Undisputed" | 6 years ago The best sportswriter the city ever knew.

By Jeremy Halbreich Founder, chairman, and CEO of AIM Media Management; Strauss’ son-in-law | 6 years ago How the first woman elected mayor of Dallas helped shape the future of the city.

By Doug J. Swanson Author of 2014’s "Blood Aces: The Wild Ride of Benny Binion, the Texas Gangster Who Created Vegas Poker" | 6 years ago The oddball oilman was a source of generational wealth.

By By Roger Staubach, Captain America, inventor of the Hail Mary, No. 2 Greatest Dallasite | 6 years ago The legendary Dallas Cowboys coach made America's Team America's Team.

By D Magazine | 6 years ago The host of KERA 90.1's Think weighs in on her all-time favorite Dallasites.

By John Slate | 6 years ago The city archivist weighs in on his all-time favorite Dallasites.
Browse the archives