Things To Do This Week

Linny Nance hosts a Hour of Power at The Balcony Club. At 8:30 p.m., the keyboardist performs an hour of jazz and soul to attendees for a night of crooning tunes.

Metrocrest Services celebrates its 50th anniversary at Three Nations Brewing Co. Proceeds from every purchase of the limited edition beer go toward the nonprofit.

Bring the kids out to Grandscape for a morning of water marbling at 10:30 a.m. Dallas Silk Art teaches the free art class.

Chet Stevens plays at The Ranch in Las Colinas for their Live Music in the Pavilion series. The country music set begins at 7 p.m. 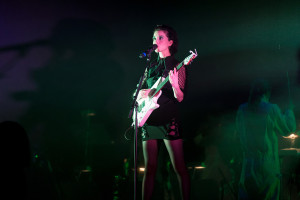 St. Vincent performing at the Winspear. Photo by Mikel Galicia.

Purchase a ticket to “Down and Out Downtown,” St. Vincent’s live stream concert debut. The live stream begins at 8 p.m.

Charlotte McConaghy, featured guest for Arts and Letters Live, discusses her two bestselling books on environmentalism and history at the Dallas Museum of Art virtual event. Buy your ticket here.

Recurring Things To Do

#IfThenSheCan, an exhibit of contemporary women professionals in STEM careers, at NorthPark Center runs until October 24. The 3D printed display features 122 statues of women STEM innovators to inspire the next generation of young girls and women.