First, let’s address the council members who do not appear in the group shot above. They are absent because — and I’m editorializing here — they didn’t wear Christmas sweaters on account of their hatred for Jesus and America and pickup trucks and bald eagles and panettone, which is a delicious Italian sweet bread that doesn’t get the coverage it deserves. Three council members went Christmas sweaterless: Casey Thomas, Carolyn King Arnold, and Cara Mendelsohn. I posed a very direct question to the latter, demanding that she explain her lack of participation. She texted her response during yesterday’s lunch break in the council meeting: “My sweater that says ‘I only wore this for D Magazine’ was in the laundry.” With all due respect to the councilwoman from North Dallas, I suspect that is a lie. I do not believe she has a sweater that says “I only wore this for D Magazine.” You know why I think that? Because if she had a sweater that said “I only wore this for D Magazine,” and if that sweater were soiled, it would be at the dry cleaner, not in the laundry. Now you understand why we need ethics reform at Dallas City Hall. Our new inspector general has work to do. 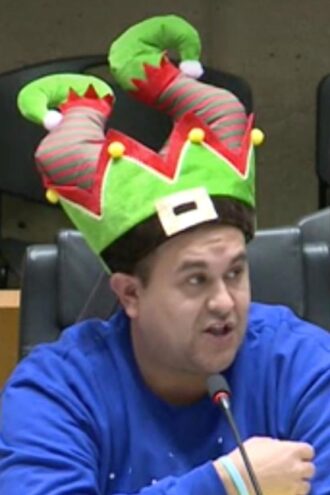 One of the things I most enjoy about Christmas Sweater Day is watching serious adults discuss serious adult matters while wearing a hat that makes it appear as if an elf’s severed legs have been stuck to it. So normally I would applaud Councilman Adam Bazaldua for getting into the spirit. But I can’t do that. The reason: that is not Bazaldua’s hat. Ladies and gentlemen, I point you to Christmas Sweater Day 2020, when then Councilwoman Jennifer Gates debuted the severed elf legs hat. Wearing a former council person’s headgear is almost as bad as mistaking a sweatshirt for a sweater, which Bazaldua also did. And, anyway, it’s just Snoopy on his doghouse, which has been decorated with a wreath and lights. District 7 deserves better. 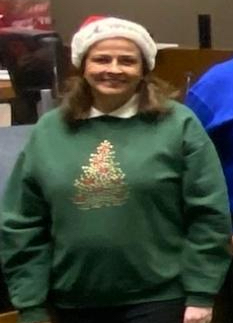 Councilwoman Paula Blackmon still hasn’t gotten White Rock Lake dredged. So you can probably guess what I think of her green sweatshirt (!) with its Christmas tree. It’s not a big barge with a vacuum on it that sucks up mud. I give it low marks. 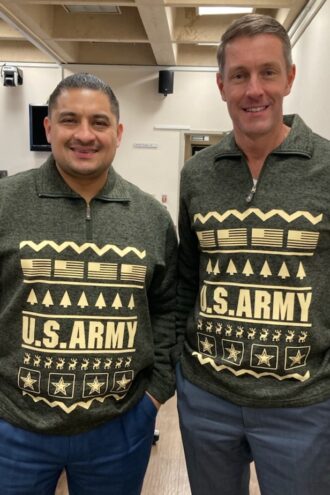 Councilmen Chad West and Jaime Resendez both bravely served our country in the U.S. Army. Resendez did a tour of Iraq, and West did tours in Hungary and Bosnia. Freedom isn’t free, and their hard work was part of the price that had to be paid so that we can enjoy things like an independent press and the right to a jury trial. It therefore would be disrespectful to criticize their identical half-zip pullovers by pointing out that they aren’t sweaters and that Jesus Christ wasn’t exactly onboard with killing people, which the Army has done unapologetically for many years. Anyway, those Christmas trees look like arrows. West’s 2019 Christmas sweater win is now under review.

Speaking of Jesus Christ, Councilman Adam McGough is a fan. He goes to Watermark, where they take Jesus pretty seriously. Which is why his Tupac Christmas sweater, depicting Tupac doing the Westside sign from the album all eyez on me, makes me scratch my noggin. Here’s a better image of it ($45.99 and you can have one, too). Look, I’m one of those people who knows that Jesus of Nazareth was Black. Or at least not White. So I’m totally fine with McGough wearing a Christmas sweater bearing the image of a rapper whose song titles McGough couldn’t name three of. But what would the folks at Watermark think of the album cover for The Don Killuminati: The 7 Day Theory, which shows Tupac as Jesus hanging on a cross? I’M JUST ASKING A QUESTION! 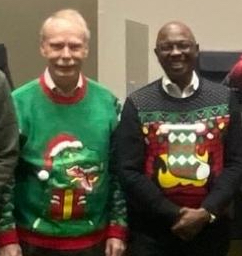 I want you to imagine this: Councilmen Paul Ridley and Tennell Atkins in an action-fantasy flick that is Lethal Weapon meets Fast & Furious meets Cocoon. With a new lease on life given to him by aliens, the reckless Ridley is paired up with Atkins to bust a dangerous street-racing gang. Ridley’s volatile behavior just might help them nab the bad guys — if it doesn’t kill them both first. Admit it. You’d watch. Anyway, these are good sweaters. 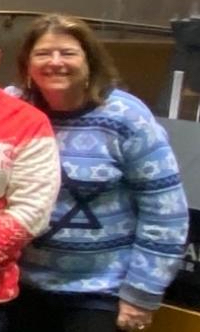 Councilwoman Jaynie Schultz played it safe this year. She’s new to Council. She’s Jewish. She could have gone with a Hanukkah sweater with Mordechai Carver on it, the “certified circumcised dick” from The Hebrew Hammer. It would have been a bold choice. It might have ruffled some feathers. Instead she wore the sweater that Seth Rogan wore in The Night Before. I have no issues with that decision. But next year, Councilwoman, I will expect something with more zhuzh.

Councilwoman Gay Donnell Willis is a Red Raider (along with Blackmon) and new to the Council. Don’t ask me how I know this, but Willis’ mother gave her this sweater when she was at Texas Tech. It’s impressive that she still has it and that it’s in such good shape. Third runner-up with her guns up! 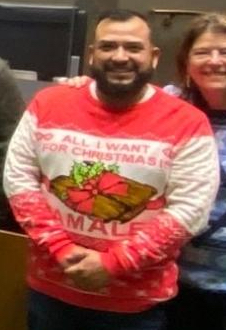 Councilman Jesse Moreno is part of the tamale industrial complex. His father started La Popular Tamale House, from which a number of years ago I ordered two dozen tamales and had them sent to my father-in-law in Fairfax, Virginia, for his birthday. I scored major points with that gift. This year, in the spirit of the season, I’m giving all my points to Moreno for his “All I want for Christmas is tamales” sweater, even though the sweater doesn’t make sense, because the last thing Moreno probably wants for Christmas is tamales. Think about it. He can make all the tamales he could possibly eat. Anyway, he’s second runner-up. 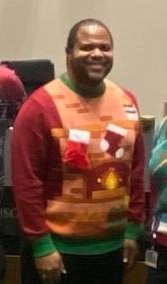 Mayor Eric Johnson’s Christmas sweater is a very solid Christmas sweater. Most important, it’s a sweater. It fits. And the stockings hanging on the mantel are a classic concept that never goes out of style. You can’t tell from this pic, but the stocking on the left is an actual 3D stocking hanging from his sweater. It makes my eyes happy. Tristan Hallman did a great job picking out this sweater for the mayor. Johnson is the first runner-up. 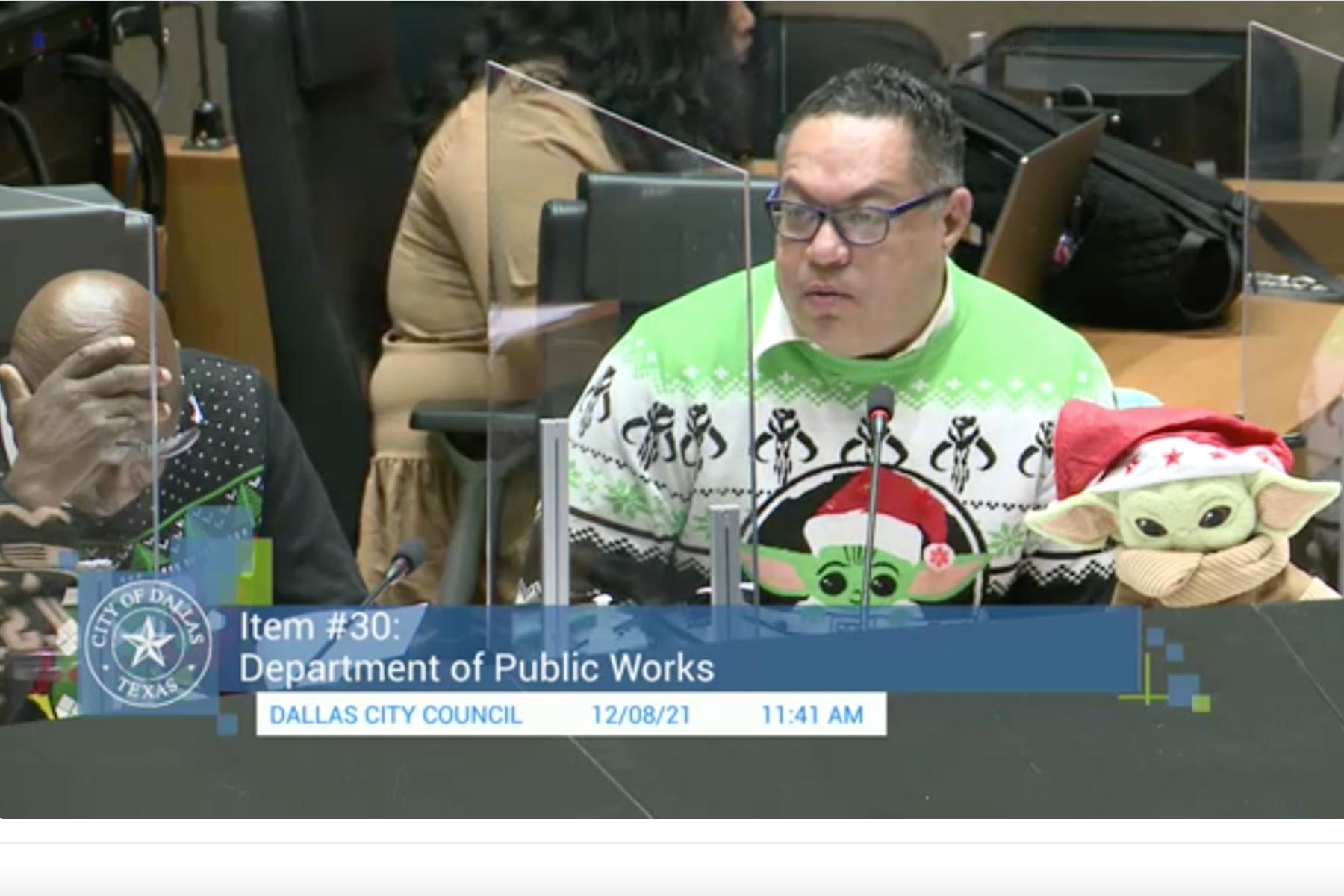 I want you to study this picture. Take it all in. On the left, Atkins is massaging his bald head in frustration, maybe because the evil street-racing gang has rigged his chair at the City Council horseshoe with a bomb that will explode if he stands up, and his crimefighting buddy, Ridley, has just made a wiseacre comment about flatulence. And there’s Councilman Omar Narvaez calmly and seriously offering his thoughts on Item #30 — while wearing a Christmas sweater with baby Yoda on it. And you can’t tell from this still image, but baby Yoda’s Santa Claus hat has blinking lights. AND baby Yoda himself is sitting right there at Narvaez’s desk, taking in the whole council meeting, ready at any moment to chime in with his own thoughts on Item #30, if called on. Narvaez is a Star Wars freak in general and a Mandalorian freak in particular. He’s got a bit, and he sticks with it.

2017: Scott Griggs was initially declared the winner, but then, in a controversial move, I was forced to issue a correction and confer that victory on Narvaez, who wore a Darth Vader sweater.

2018: Not sure what happened. Narvaez dropped the ball. I wrote: “Last year, Omar Narvaez wore a Darth Vader Christmas sweater that went a long way toward making Dallas a world-class city. It was a B_G thing that happened here. This year, he mailed it in. I saw Narvaez on the street in Deep Ellum yesterday. If I’d known he planned to wear this mild-ass Christmas sweater the next day at Council, I would have treated him like the Mink Coat Mob treated LBJ at the Baker Hotel. (Google it, buddy.)”

2019: Narvaez regained his form with a baby Yoda sweater that led me to write: “If you haven’t been watching The Mandalorian, then you are probably confused by the ‘baby Yoda’ meme, but let me assure you that Councilman Omar Narvaez is so current that I can’t tell whether he’s AC or DC.”

2020: COVID forced the City Council to Zoom (or Webex) from home, and we learned that Narvaez’s house had a serious baby Yoda infestation.

My guy might be embroiled in a confusing zoning situation in District 6, where developers want to build a huge office tower on the edge of La Bajada, but Narvaez has an unassailable sweater game (except for 2018) when it comes to Christmas sweaters. He takes no half measures (except for 2018). So the 2021 Wick Allison Memorial Most Christmasy Christmas Sweater Worn on Dallas City Council Christmas Sweater Day AwardTM goes to Councilman Omar Narvaez.

Congratulations, sir. We will not send you a certificate suitable for framing. Maybe just have an assistant print out this blog post and stick it to the office fridge with a Yoda magnet. See you in 2022.

Both women have spent time in several HCA hospitals around the state.
By  Will Maddox
Coronavirus