If you’ve been around FrontBurner for any length of time, you know that today is Christmas for your correspondent because today is Dallas City Council Christmas Sweater Day. This is the day on which I turn my considerable attention to a City Council meeting, and even though the discussion there might be about the proposed expenditure of millions of dollars on lethal and non-lethal munitions for the Dallas Police Department, as happened this morning, and even though the Geneva Convention and other important matters might come into play, I instead focus on what our elected representatives chose to wear. When people talk about the collapse of local news media, this is the sort of important coverage they bemoan the loss of. Here’s the lifeblood of democracy: 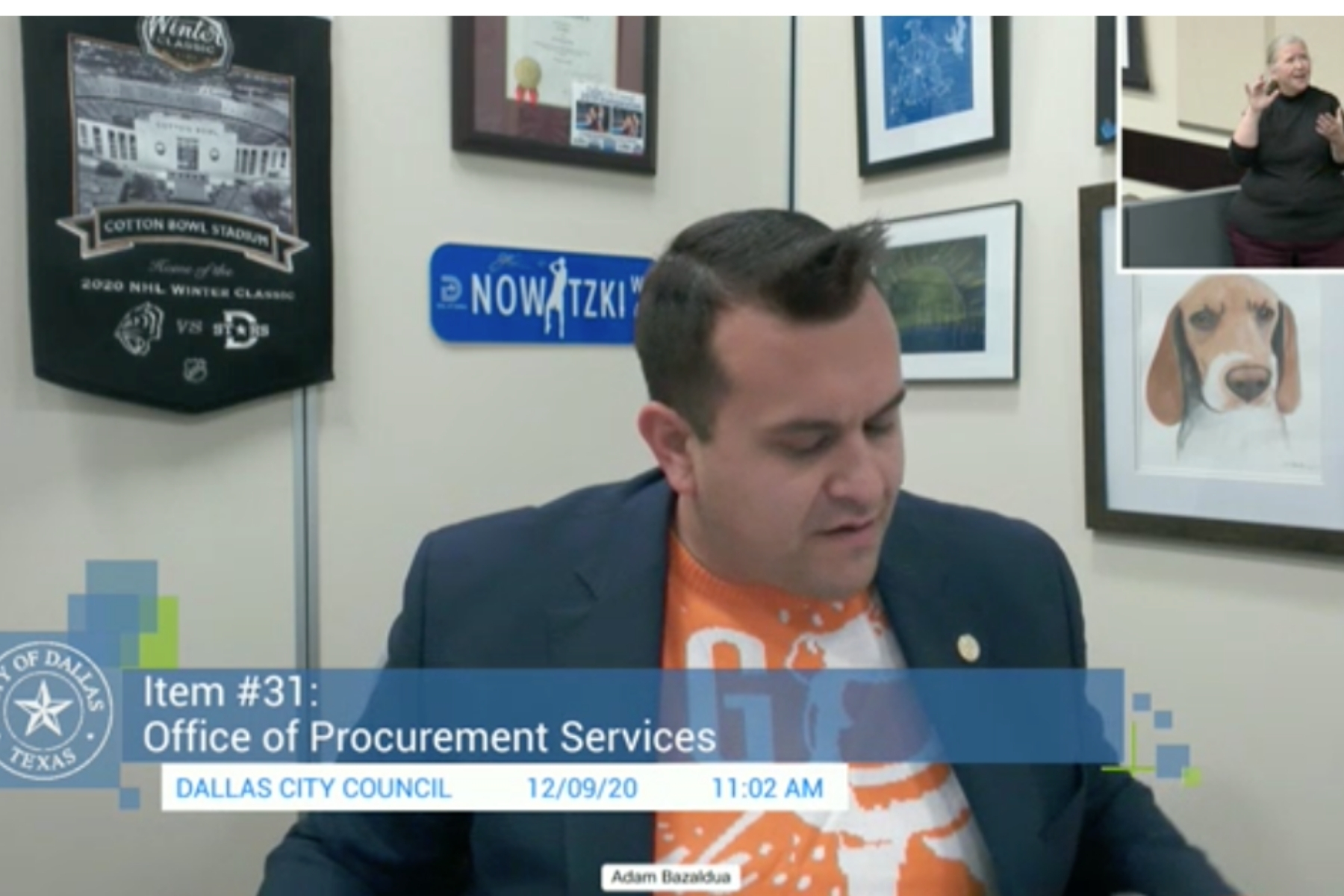 Councilman Adam Bazaldua disgusts me. He has tried to hide his shameful act with that blazer, but I can’t be fooled. You know what Bazaldua did? HE WORE COUNCILMAN ADAM MCGOUGH’S SWEATER FROM LAST YEAR. See for yourself. Here’s what everyone wore in 2019. It’s a Whataburger Christmas sweater. What other McGough hand-me-downs does Bazaldua wear? In the coming weeks, I’ll be combing through his campaign finance reports to find out. 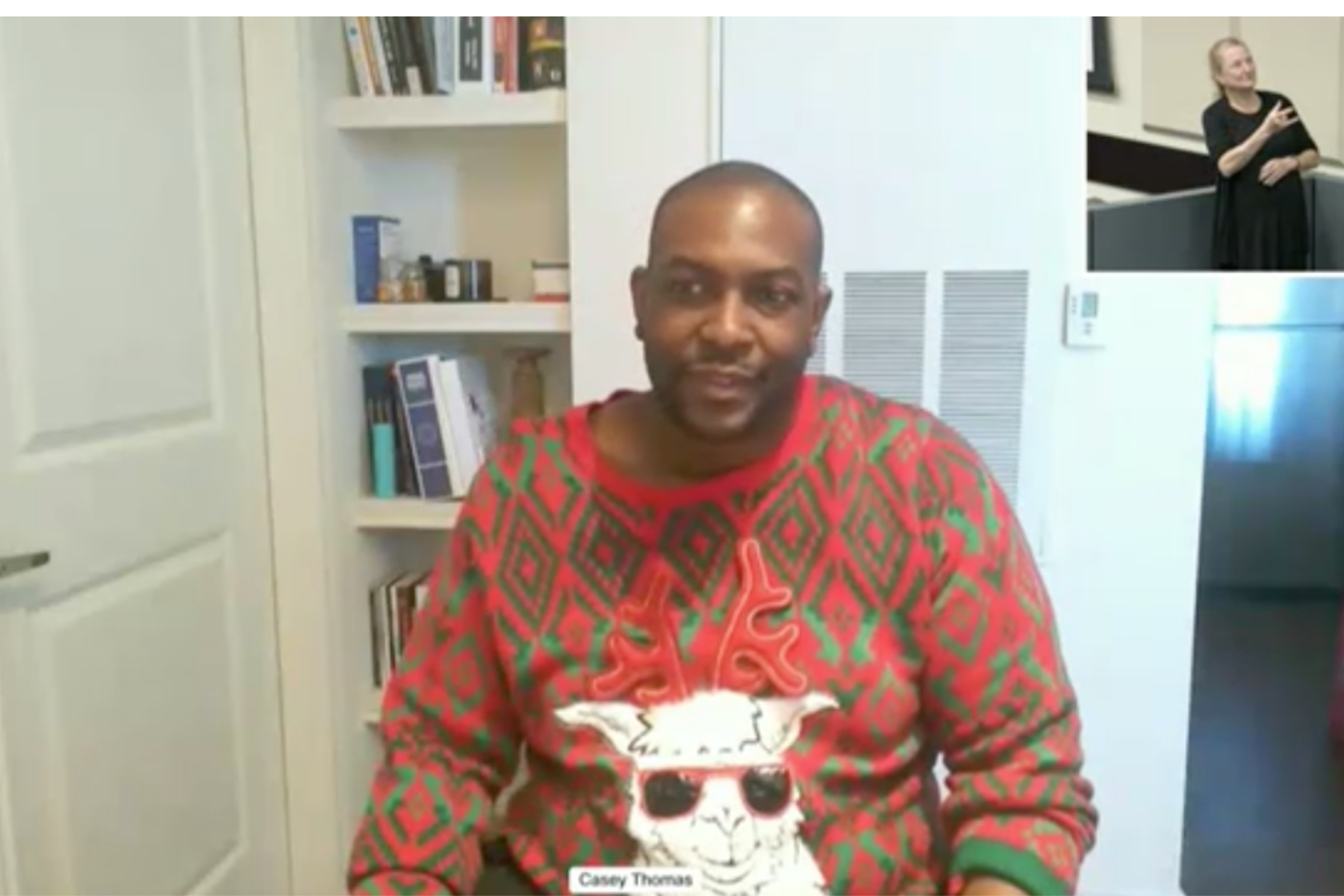 Councilman Casey Thomas doesn’t disgust me. He just disappoints me. He didn’t wear another council member’s sweater, but he did wear the same sweater he wore in 2019. Again, you can go back and look. And the neck of that sweater, if not the sunglasses-wearing llama on its front, looks like it has had a hard year. You know who else pulled this same lazy sweater move? 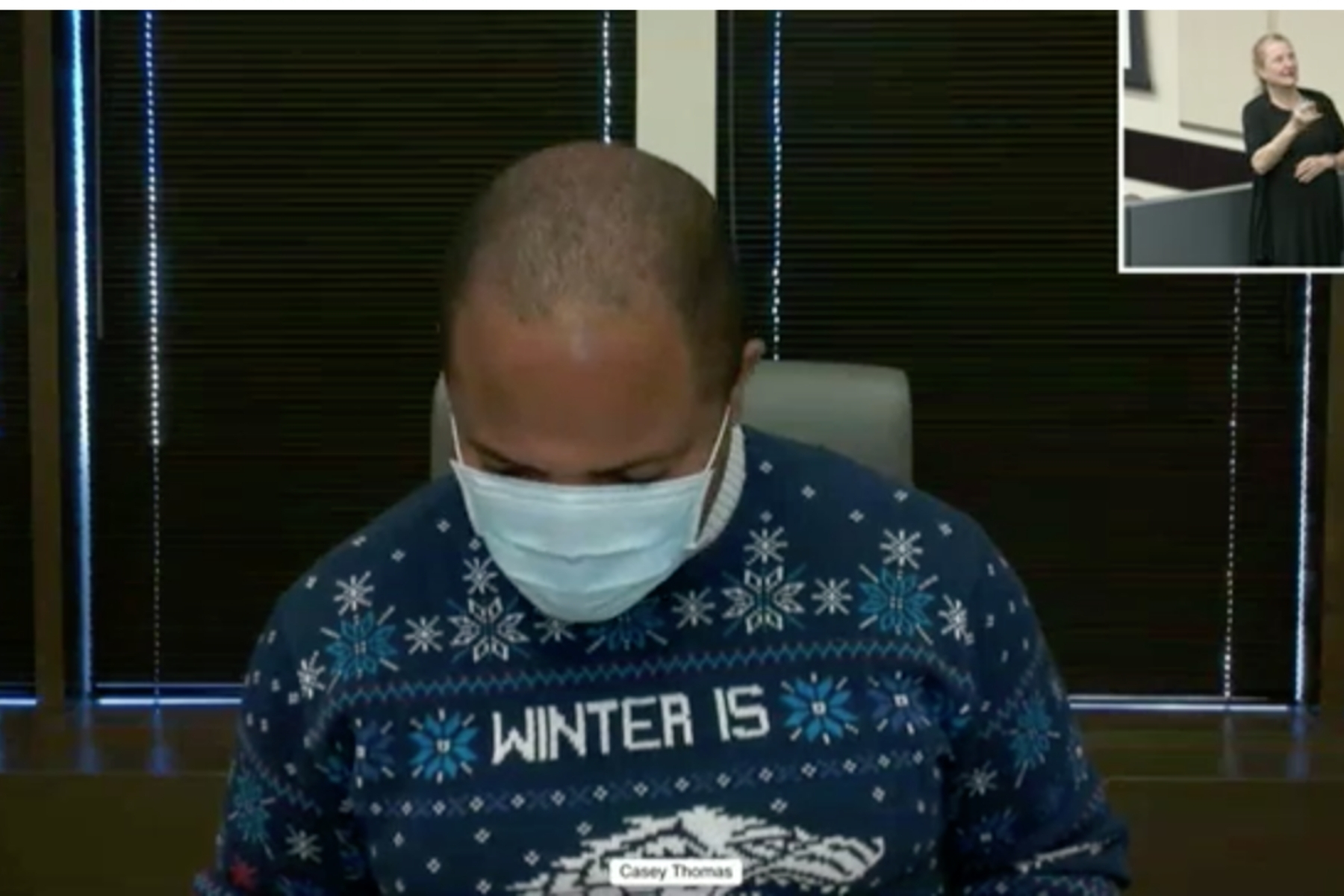 Mayor Eric Johnson. That’s who. Same Game of Thrones “winter is coming” sweater from last year. I’m not going to dwell on this. I don’t want to deal with the texts from Tristan Hallman. 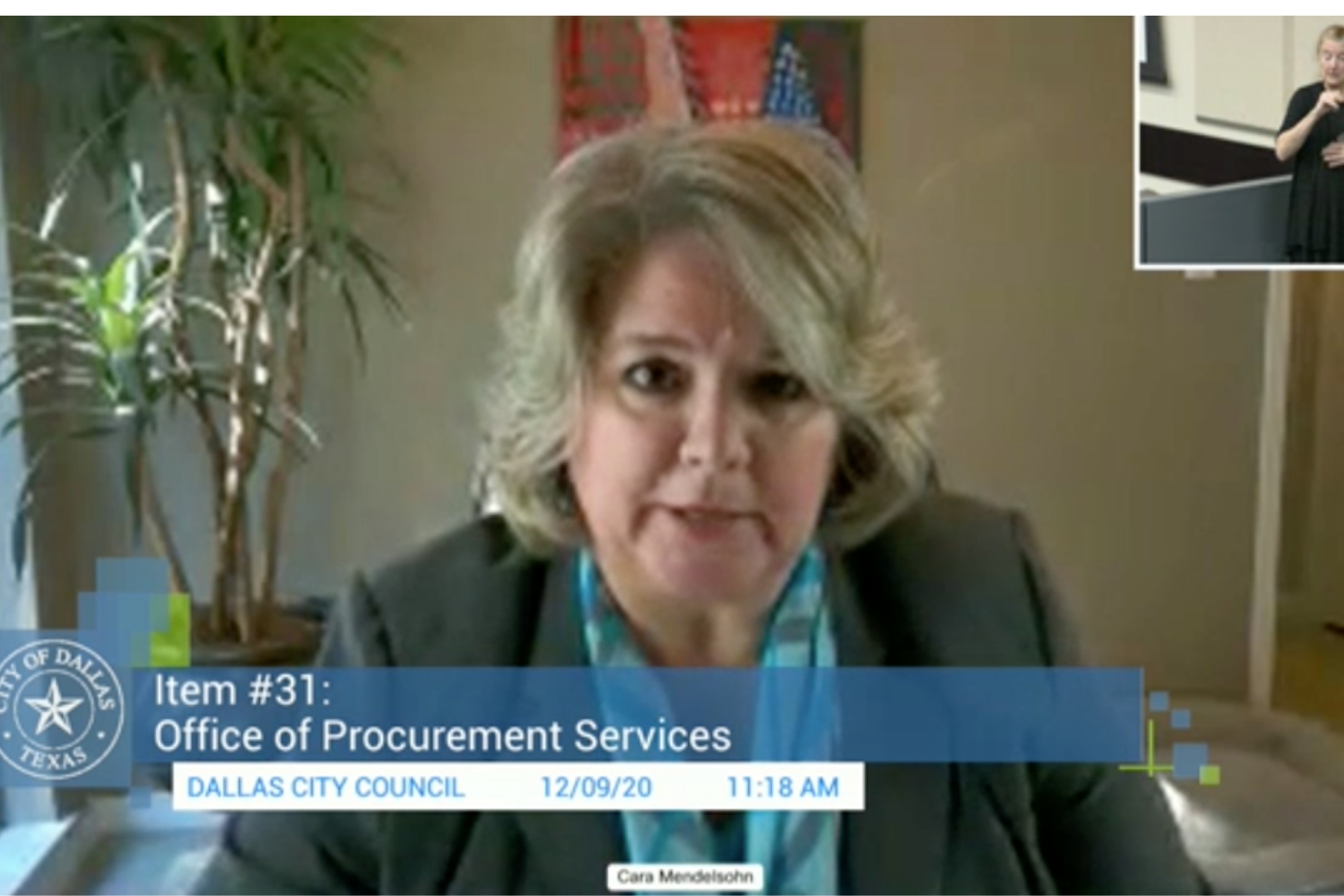 Councilwoman Cara Mendelsohn doesn’t understand why doing donuts is fun. In a Council briefing last week, she actually asked a DPD deputy chief why young people enjoy doing donuts in their cars. Someone needs to get the District 12 rep in the passenger seat of a Dodge Charger and show her. Then they need to show her why wearing Christmas sweaters is fun. 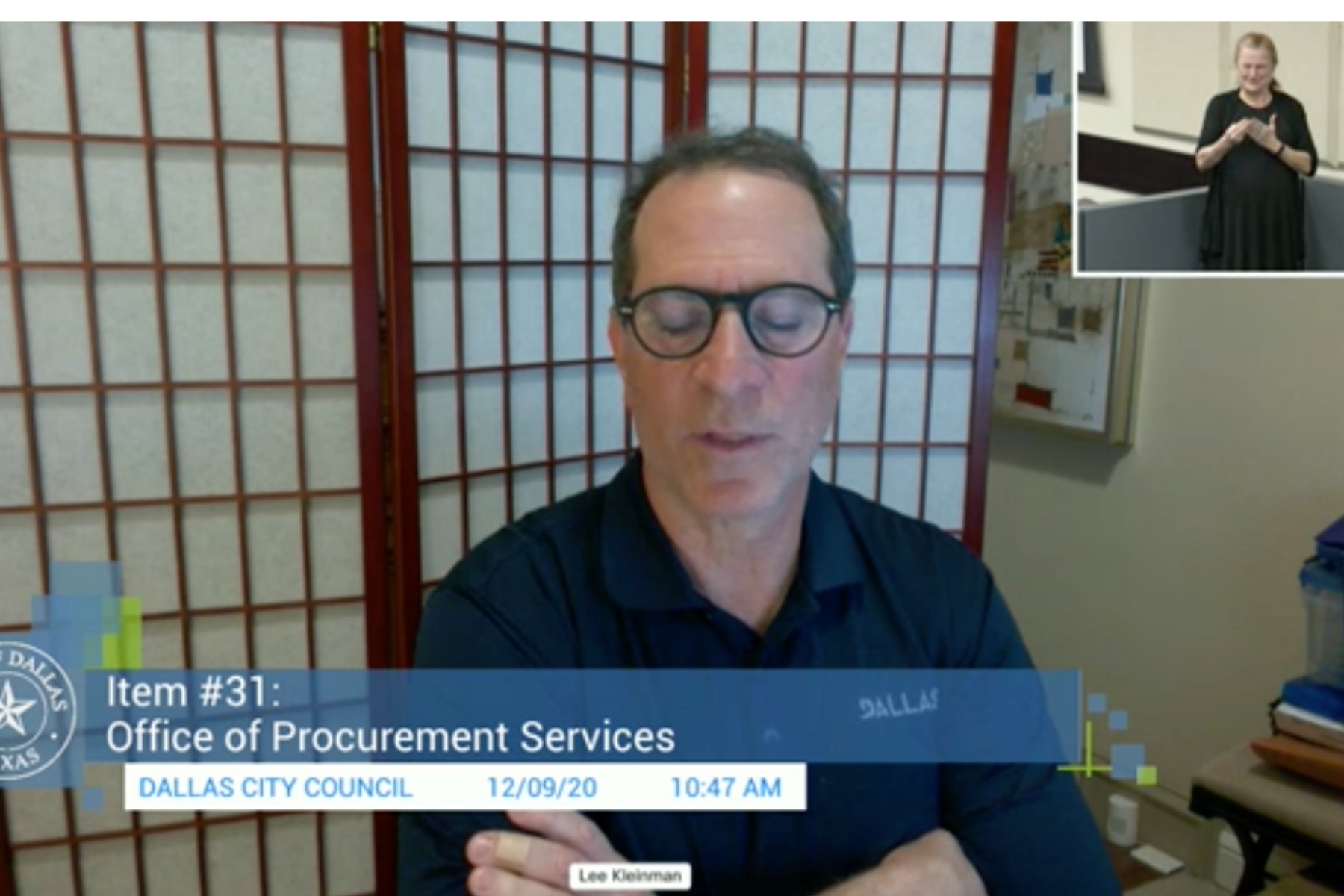 Councilman Lee Kleinman can sit in on the remedial sweater session with Mendelsohn. And I don’t want to hear about how these folks are Jewish. If Kleinman feels comfortable using a Japanese shoji room divider, then he can put on a damn sweater for Christmas Sweater Day. It can have dreidels and menorahs and samurais on it. Whatever. 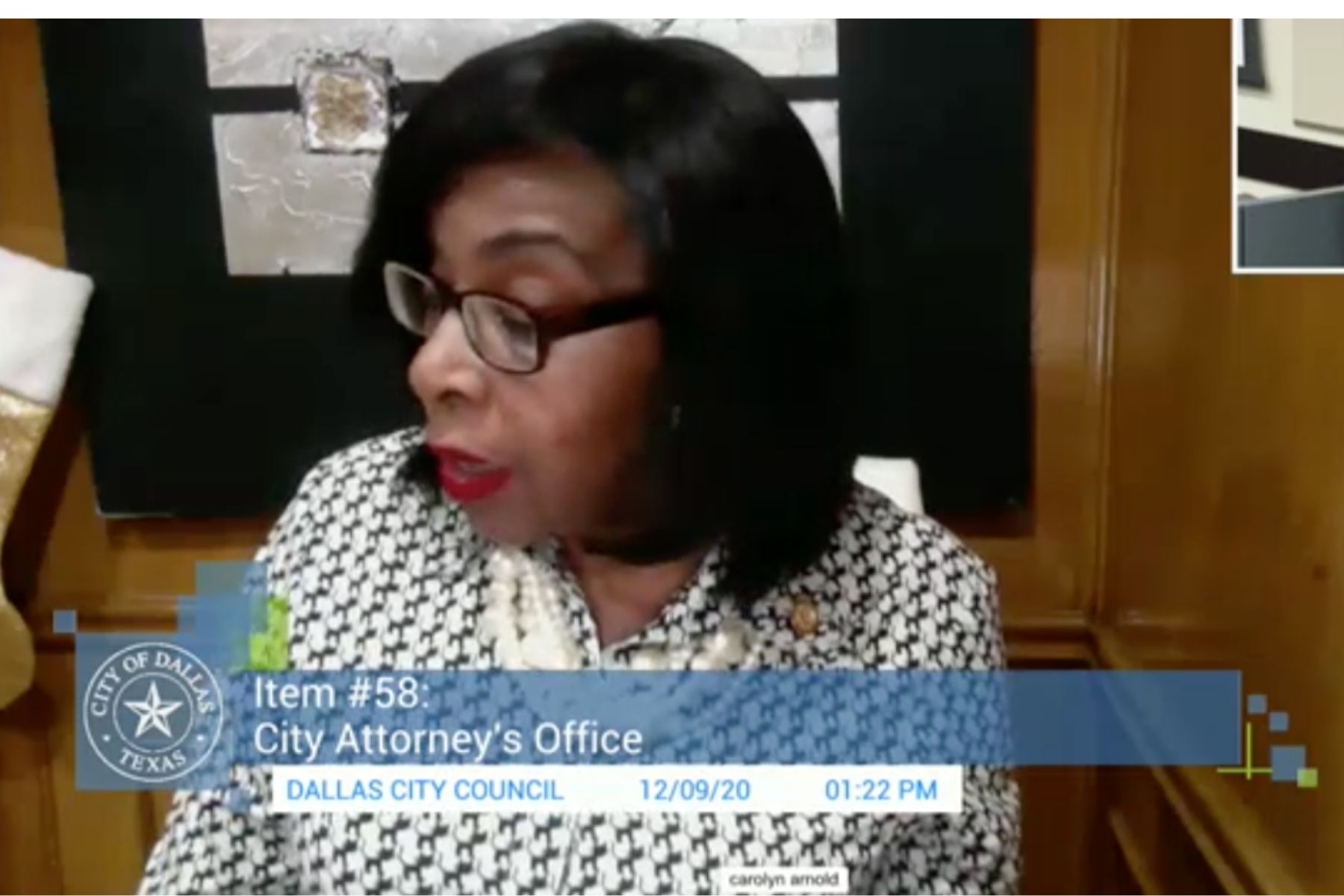 Councilwoman Carolyn Arnold is not, to my knowledge, Jewish. Not sure what her excuse is. 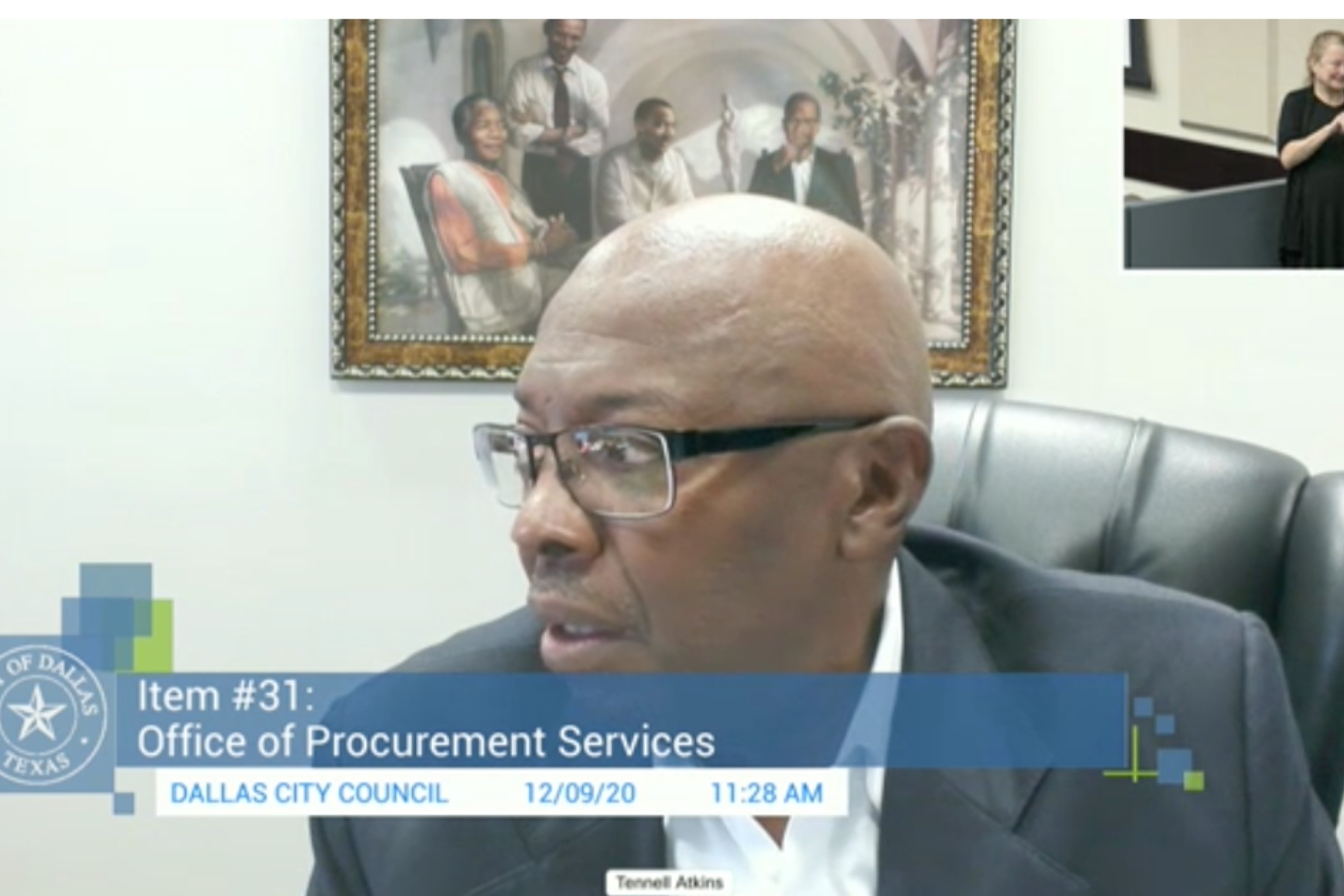 Councilman Tennell Atkins has a print of Barack Obama, Nelson Mandela, Martin Luther King Jr., and Malcolm X hanging in his house. If any of his friends or family are reading this, for Christmas the councilman might like this print of Redd Foxx, Bernie Mac, and Richard Pryor. He also might like a Christmas sweater. 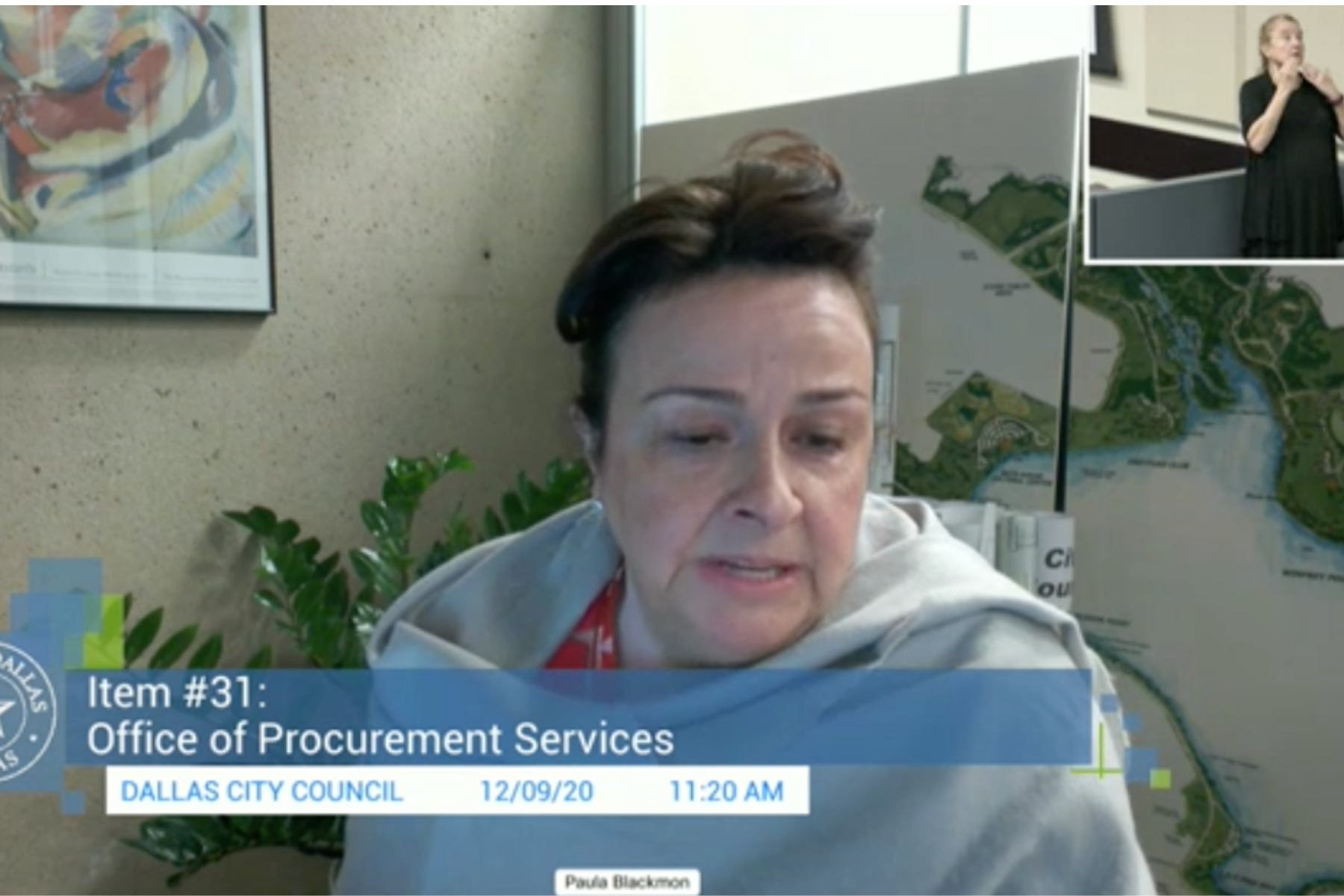 Councilwoman Paula Blackmon was apparently recently arrested in Collin County. They put the gray towel around her neck for the mugshot. They let her keep the gray towel. And then she wore it to Dallas City Council Christmas Sweater Day. 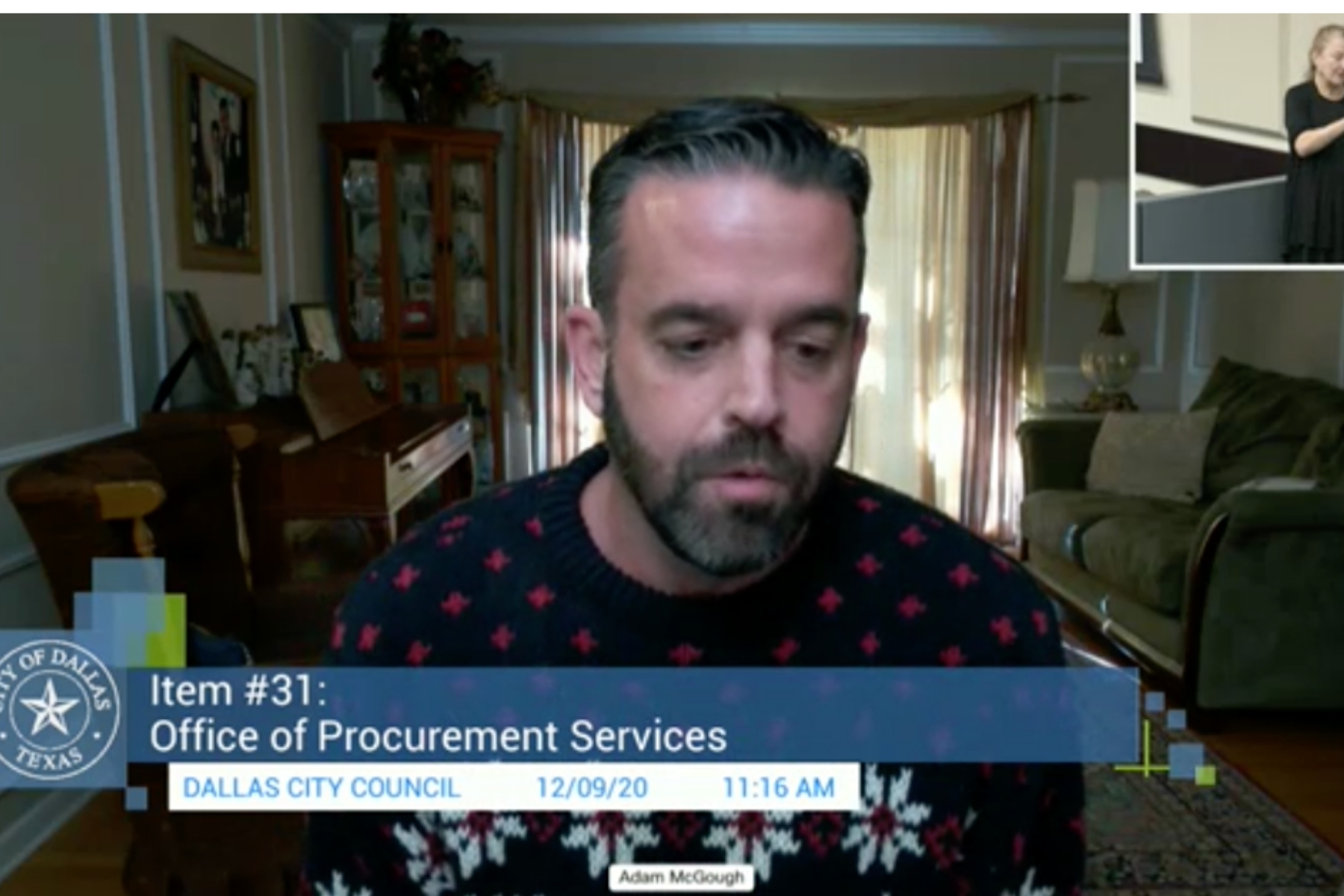 Councilman Adam McGough will presumably next year hand down this sweater to Bazaldua. Maybe Bazaldua will get his wainscoting, too. 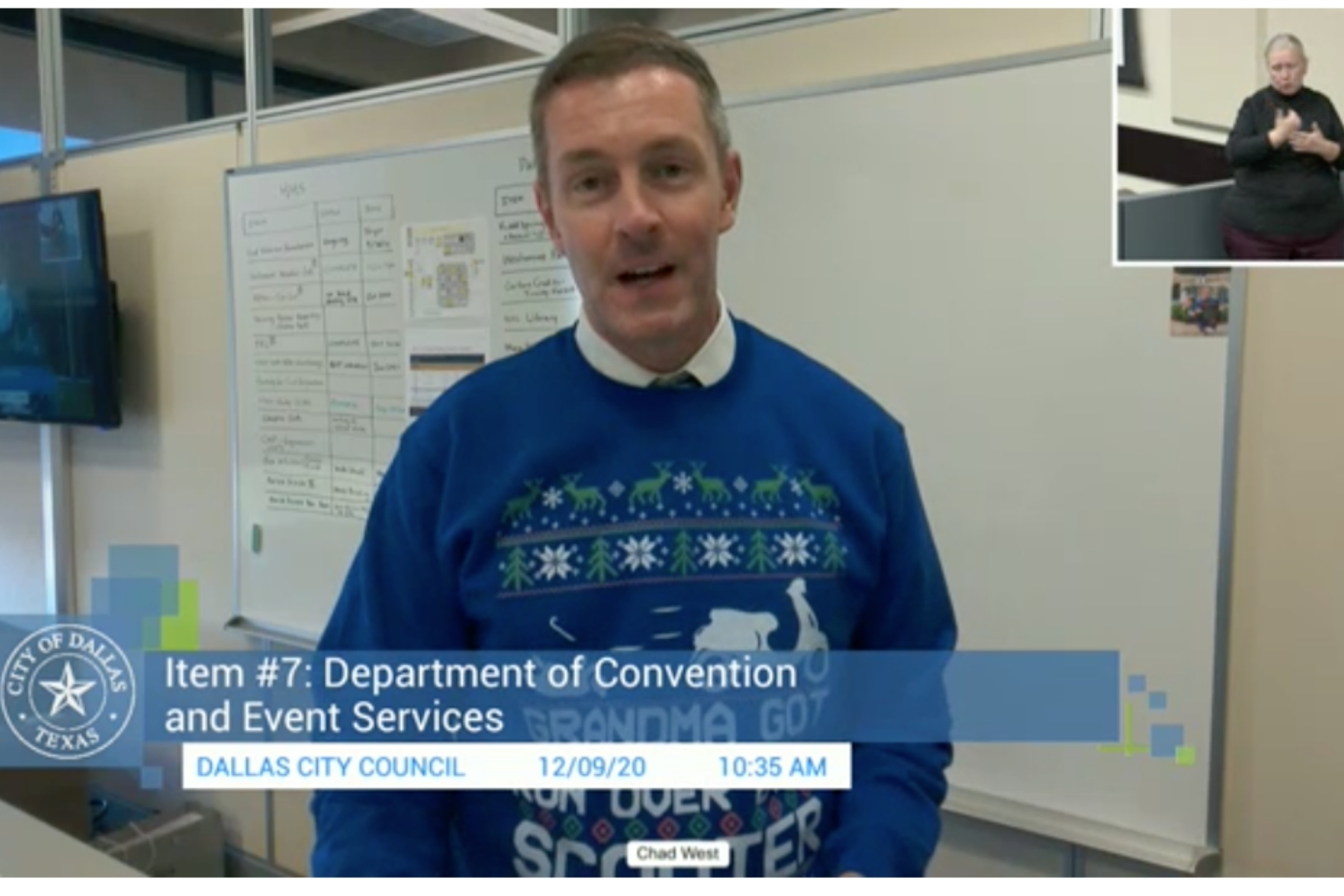 Councilman Chad West brings us to the first real contender for this year’s coveted Wick Allison Memorial Most Christmasy Christmas Sweater Worn on Dallas City Council Christmas Sweater Day Award. His sweater, if you can’t see it through the chyron, says “Grandma Got Run Over by a Scooter.” It’s funny. It’s topical. It’s pertinent to Dallas. And I’d be remiss if I didn’t note that today is West’s birthday. Good show. Third place. 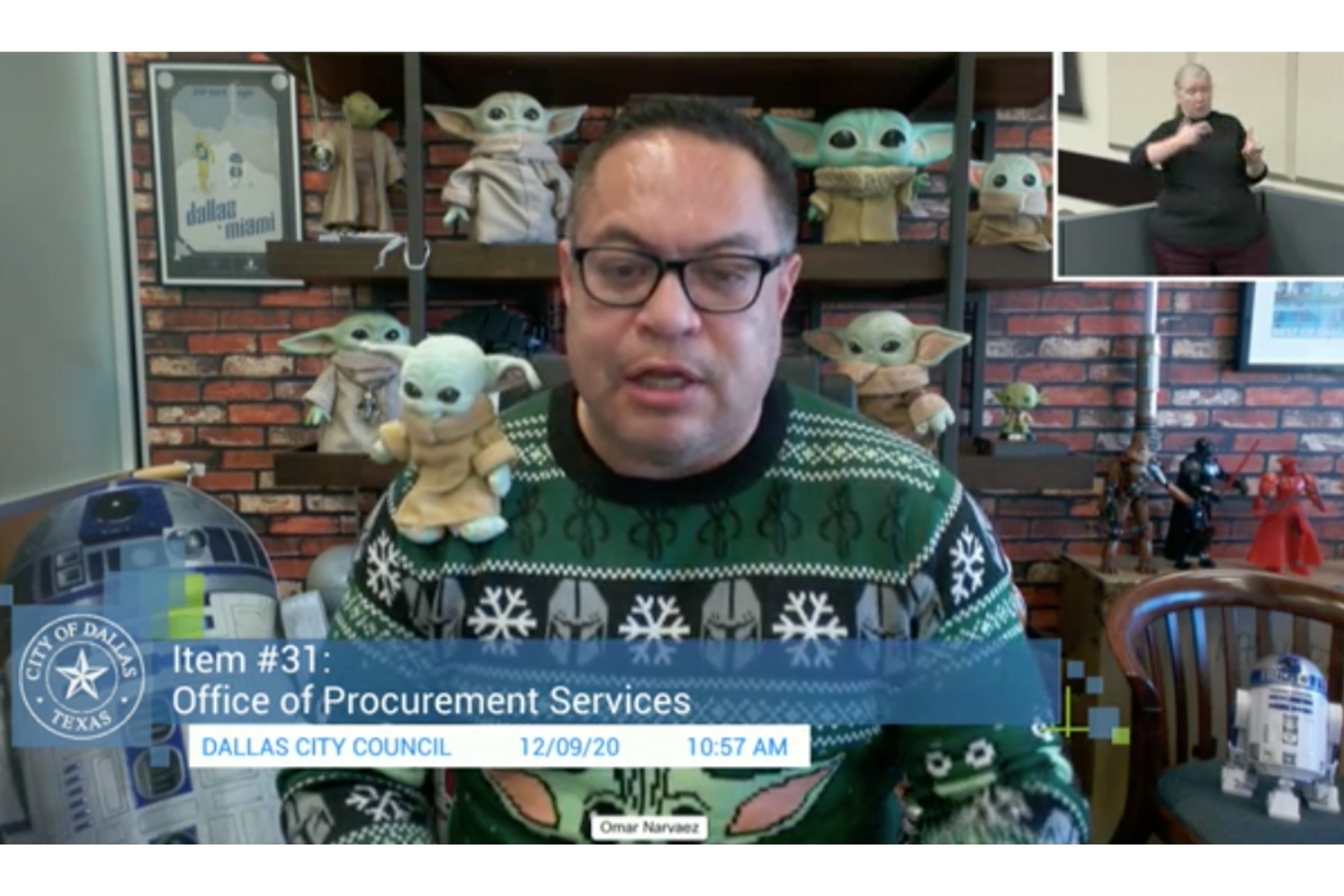 Councilman Omar Narvaez isn’t playing around. Or, rather, he is definitely playing around. I count no fewer than eight baby Yodas in this tableau, the centerpiece of which is this delightful Mandalorian-themed Christmas sweater. The real question here is whether the baby Yoda that became animate and found its way to the councilman’s shoulder should be considered part of the Christmas sweater or just a Webex onlooker perched on the sweater. It’s a tough call. Second place. This is the way. 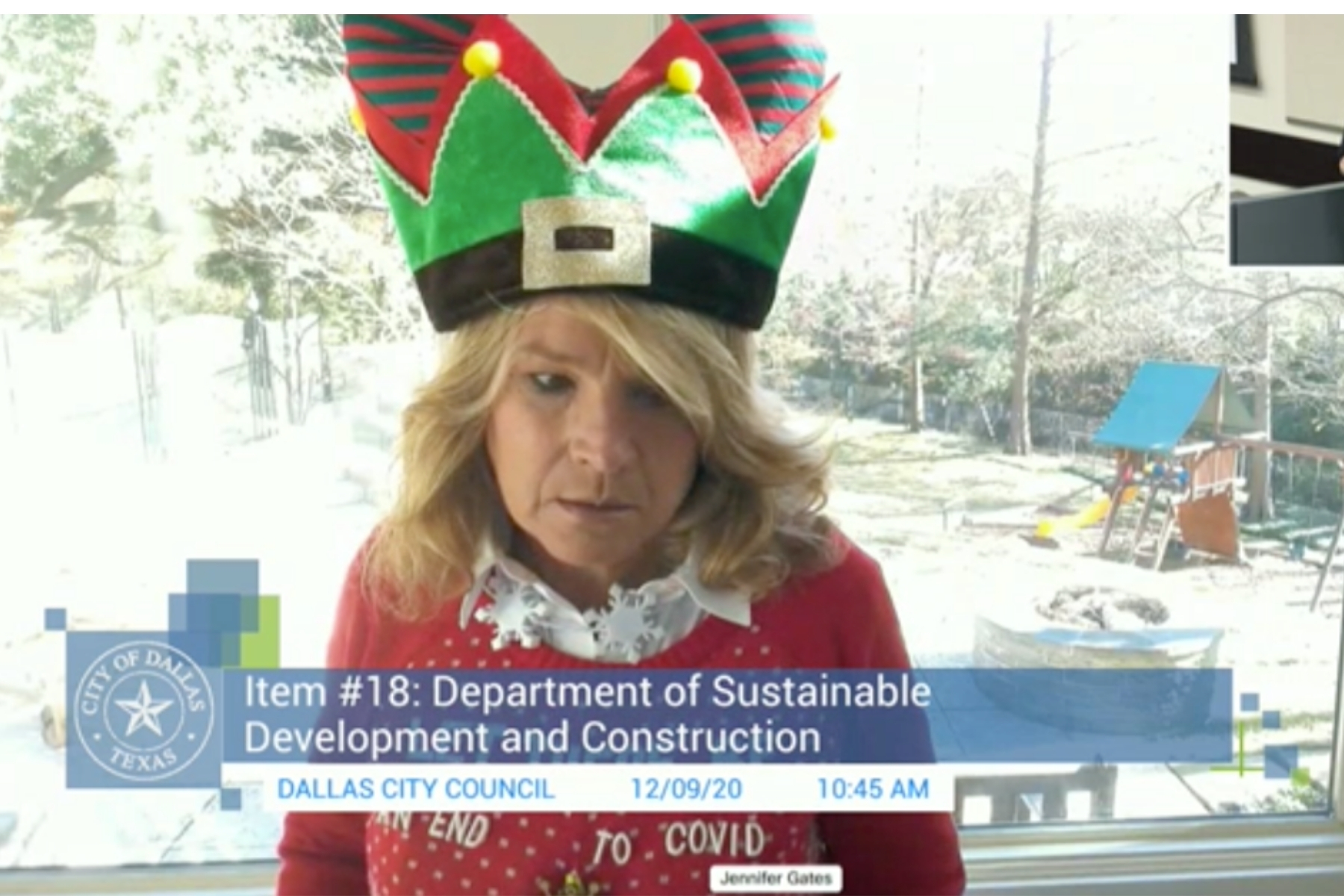 Councilwoman Jennifer Gates was docked points last year because she admitted to borrowing a friend’s Christmas sweater (at least it wasn’t another council member’s sweater). This year she took pains to let everyone know that she’d gotten the glue gun out of her craft closet and was putting in the hard work with her own hands. The result is solid. Here’s a detail shot I swiped from Twitter: 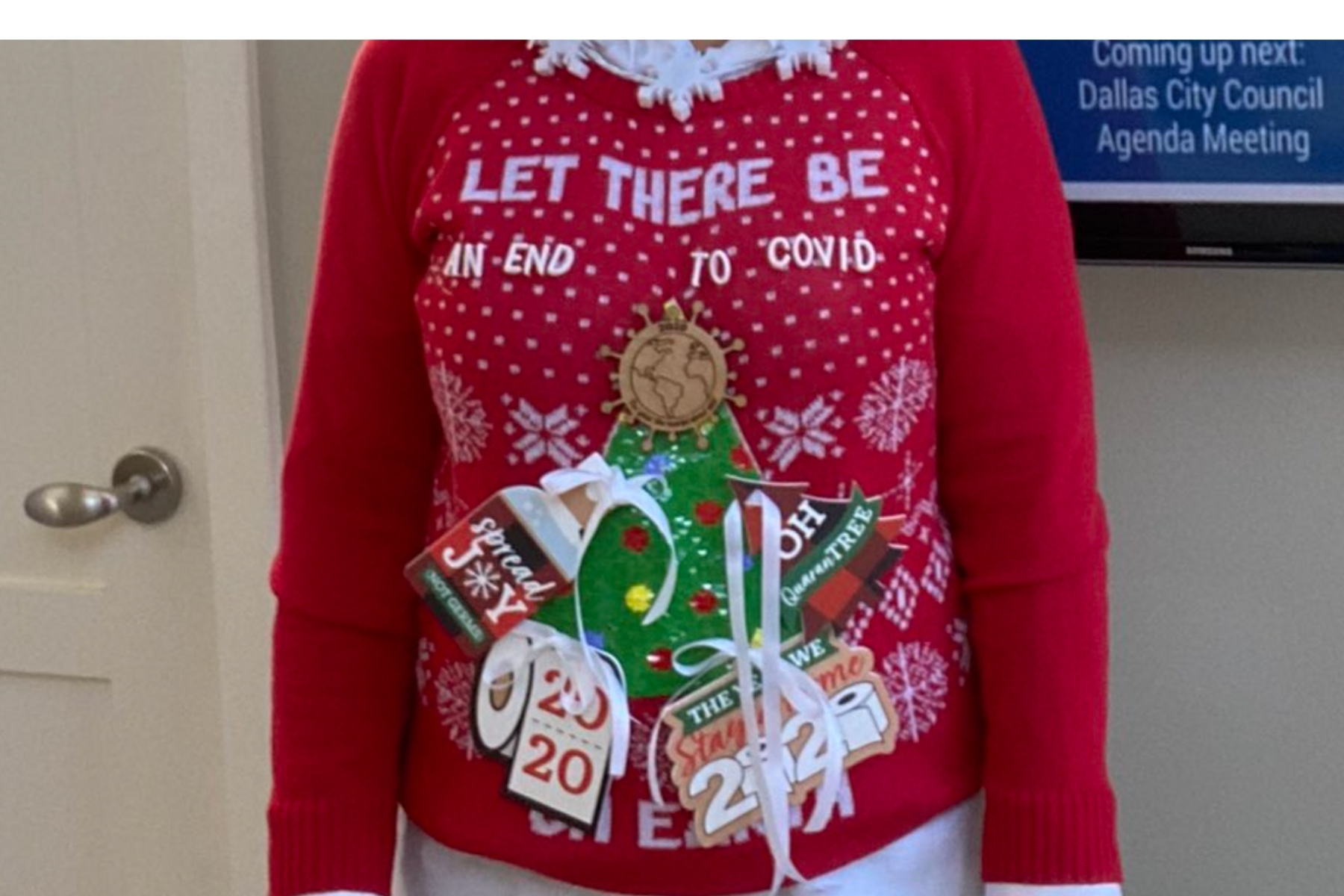 She has taken the sweater’s message and made it her own. She has decorated the Christmas tree with COVID-related items, including the coronavirus tree topper, a position of honor that would seem a misfire if you thought about it too long, which you shouldn’t. Because here’s the deal: Gates will be term-limited out of her seat next year. She will run for mayor and be a formidable candidate given the North Dallas money that will grease her campaign sleigh’s skids and given her middle name, which is Rudolph. Robert Wilonsky will run unopposed to fill her District 13 seat on a platform of nostalgia and baritonalism. He’ll wear a homemade sweater featuring the album art from 2004’s Christmas With Johnny Cash. In 2021, he’ll win the Wick Allison Memorial Most Christmasy Christmas Sweater Worn on Dallas City Council Christmas Sweater Day Award. So this year, Gates deserves it. It will be her biggest accomplishment as the District 13 representative (besides destroying Laura Miller by 32 points, of course).

First place goes to Jennifer Gates. (As for her hat, she should give it to Bazaldua.)

Editor’s note: David Blewett, Jaime Resendez, and Adam Medrano said nothing during the Council’s morning session and therefore were never visible. If one of them wore a cool Christmas sweater and I missed it, that’s his fault.