I don’t need to tell you that yesterday was Christmas Sweater Day at City Hall. The past two years, I’ve spent way too much time on Christmas Sweater Day watching the video proceedings of the council meeting so that I could authoritatively critique the Christmas sweaters worn at the horseshoe by our duly elected, hardworking (most of them) representatives. But yesterday I was too busy to tackle the sweaters thing. We are cranking out the February issue (!) of D Magazine. Funny thing: a couple of council members contacted me to ask what I thought of their sweaters and those worn by their colleagues. It warms the cockles of my heart to know this has become a yearly Dallas tradition. I’m humbled. (No, I’m not!) So let’s get to the damn sweaters. From left to right: 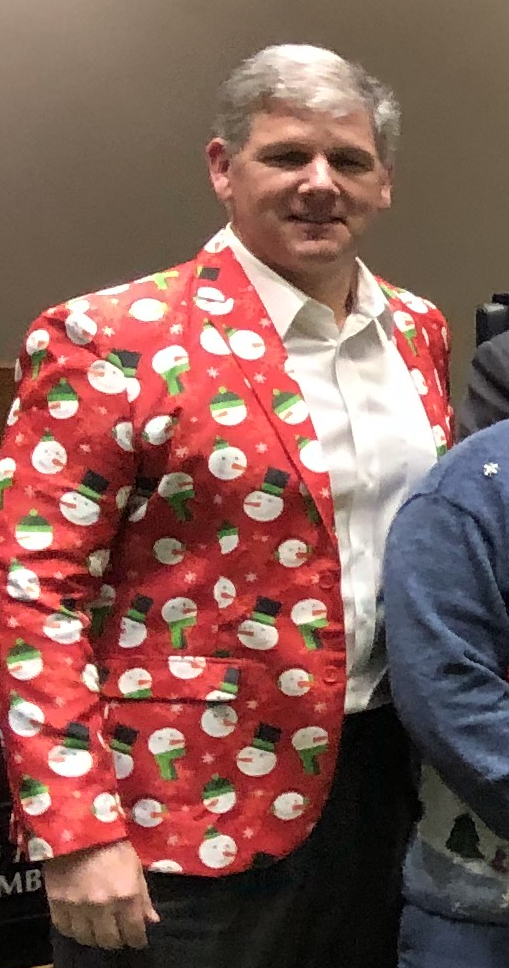 David Blewett makes this too easy for me. I’m ashamed to do this. He’s new to the Council. For that and other reasons, I should cut him some slack. But you know what? This one’s for Baby Jesus: when it came to Christmas Sweater Day, David really blew it! Pow! BANG. Rock me. But listen. District 14 has a real problem. Last year, its representative, Philip Kingston — who, after being unseated by Blewett, had to go record a podcast with Brett Shipp — wore an Easter sweater. But at least it was a sweater. What we have here is a dang Christmas blazer. Or jacket. I won’t quibble. Councilman Blewett, get your act together. District 14 deserves better. 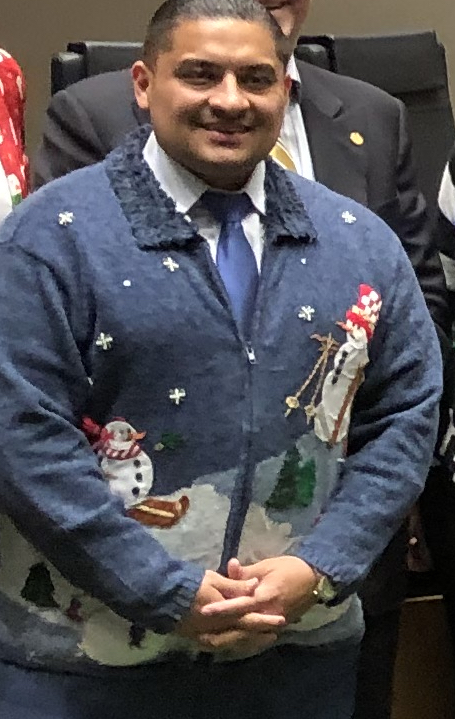 District 5 Councilman Jaime Resendez enlisted in the Army before he graduated high school and did a tour in Baghdad, so I was worried that this freshman, like Blewett, would make a mess of Christmas Sweater Day, and I’d have to go strong mayor on his sweater, provoking Resendez into a close-quarters fight like that one in Saving Private Ryan where the German soldier slowly sinks a bayonet into the heart of a U.S. soldier while gently whispering in German, “You’ll see, it will be over quickly.” Thankfully, Resendez wore a sweater that every American (save one) can be proud of. Love the zipper. Love the collar. High-five. 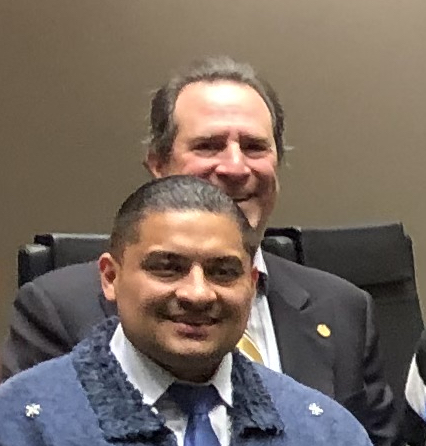 You know who is the one American who doesn’t give two dreidels about Resendez’s Christmas sweater? Councilman Lee Kleinman. That’s who. I actually did some journalism-style texting to find out why Kleinman opted out of Christmas Sweater Day. “I’m just a grumpy old man,” he replied. To that I say: if you are going to do Scrooge, then don’t smile in the Christmas Sweater Day photo while you are hiding behind Jaime Resendez, a man who fought for your freedom. 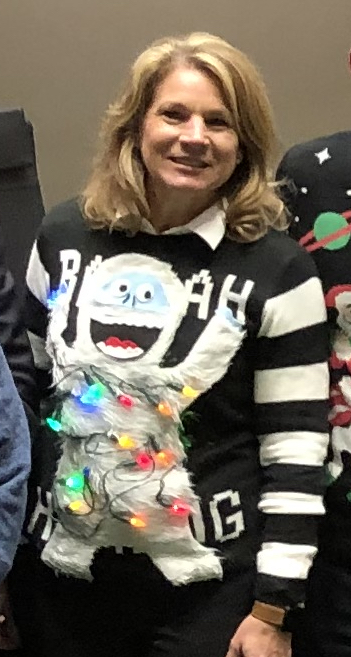 If I were Councilwoman Jennifer Gates, I would commission a sweater with the likeness of my father on it. Like this. Only instead of a football, he’d be getting ready to throw a wrapped present. And then I would run for mayor after Eric Johnson fails to complete his four-year term for whichever reason of four likely reasons he doesn’t complete his term. But anyway. Back to her sweater. I like it. The Bumble. The lights that actually light up. District 13 is well represented, Christmas sweater-wise. Gates tells me that a friend made the sweater and she borrowed it.

Here we have another freshman, No. 1 in your district and No. 1 in your heart, Chad West. Chad West. Chad … West. If you were a writer of Tom Clancy-style thrillers and I were your editor, and if you sent me a manuscript wherein the main character’s name was Chad West and he wore a Christmas sweater depicting Santa Claus wielding a light saber while riding a unicorn through outer space, I’d say, “Print this book now. You are a genius!” Chad — sorry, Councilman West — also served in the Army. Resendez and I are going to launch a nighttime mission to storm Chad’s house — sorry, Councilman West’s house — and commandeer this sweater.

I’m worried about our Mayor Pro Tem, Councilman Adam Medrano. Dude is into some freaky stuff. 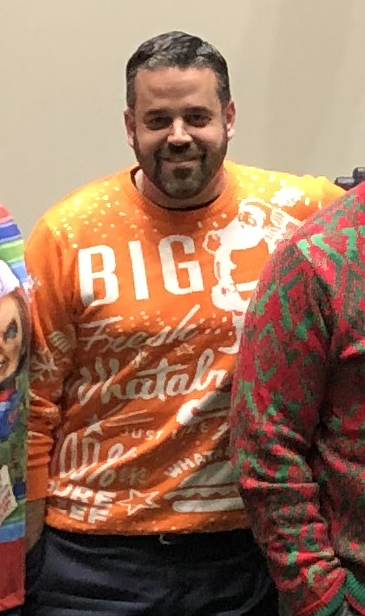 There are two things that I know District 10 Councilman Adam McGough is psyched out of his mind about. That’s 1) Jesus and 2) repaving streets. When you go to his City Hall page, where normally you’d find a bio of the rep, you see a list of the streets projects underway in Lake Highlands. And I’ve heard him say that God led him to run for Council. God is the same thing as Jesus, right? If that’s the case, he should be wearing a Chick-fil-A sweater, not a Whataburger sweater. 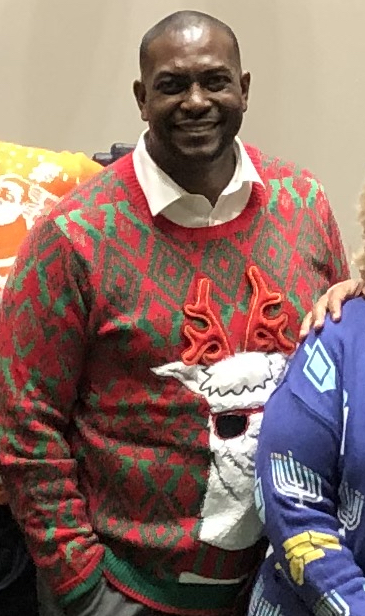 Serving as the councilman for District 3 has cost Casey Thomas some hair. I can say this because Thomas is not a woman and because my job, too, has cost me some hair. Or it’s just the natural order of things. It’s OK. But the sweater: a llama (I think) wearing sunglasses and reindeer antlers. Very solid. The collared dress shirt under the sweater gives me pause, though. What this tells me is that the sweater was a last-minute wardrobe change before Council was in session. And that means the person who deserves credit for this pullover isn’t Thomas but one of his staffers. Minus 126 points. 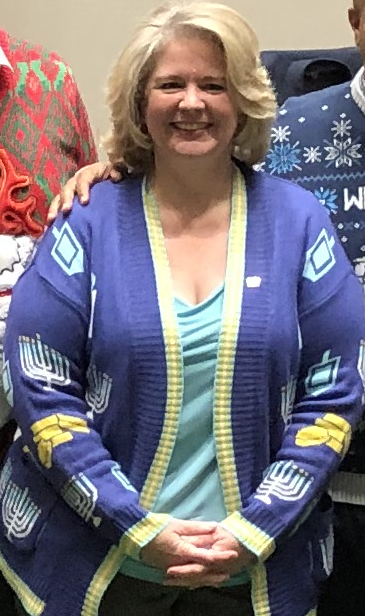 “Councilwoman Cara Mendelsohn, tomorrow is Christmas Sweater Day at Council.” “But, um, I’m Jewish.” “Sure, sure, sure. But the bit is Christmas.” “Can I just do it like Lee and hide behind someone and not wear anything?” “Then you’d be naked. I mean, if you weren’t wearing anything. You get my point.” “OK, what about a menorah sweater?” “Ugh! Fine. Just make sure you get your hair done because ever since Lee cut off his mullet, Council has been lame!” 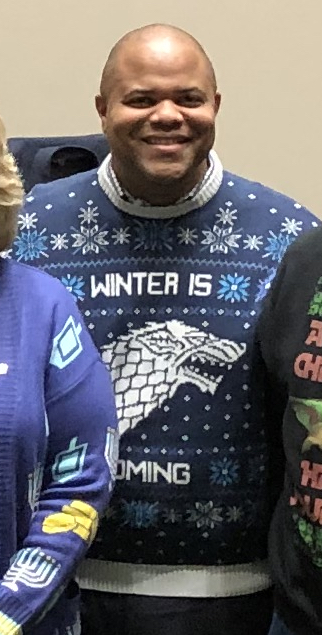 This is mayor Eric Johnson, Esq. Every time I write something about him, he gets upset. He’s very delicate. So I’ll just say this: he is wearing a sweater.

If you haven’t been watching The Mandalorian, then you are probably confused by the “baby Yoda” meme, but let me assure you that Councilman Omar Narvaez is so current that I can’t tell whether he’s AC or DC.

District 9 Councilwoman Paula Blackmon makes me sad. It’s not Santa Hat Day. That’s not a Christmas sweater. And this has nothing to do with dredging White Rock Lake. (Full disclosure: I attended a fundraiser for Blackmon, my Council rep, earlier this week at the Lakewood Growler, where I drank three beers on her tab but did NOT eat any of the meat or cheese that she’d laid out. And if I happen to see her again at the Growler before Christmas 2020, I will tell her that she deeply disappointed me on Christmas Sweater Day. And, also, we need to dredge the lake.) 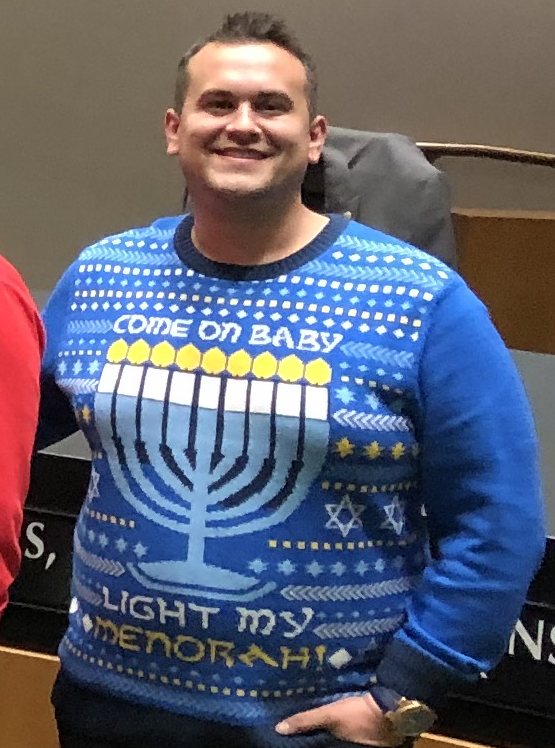 District 7 rep Adam Bazaldua defeated Tiffinni Young with 51.1 percent of the vote to become the youngest person, at 32, ever to serve on the Council. And then he wore a sweater with a Jewish sexual double entendre on Christmas Sweater Day. I don’t think Bazaldua is Jewish. I do think he embraces the sort of change that can make Dallas a world-class city.

IN SUMMATION: This year’s boldest, bestest, sweaterest-wearingest council member was a tough choice. I would have liked to give it to Mayor Johnson, just because I know he likes accolades. And Councilwoman Gates had a great sweater, but, honestly, her friend that made it deserves the honor. So. I have to go with Chad West this year.

Good luck to everyone next year.

Scenes from the Dallas Holiday Parade