Today is my favorite day of the year. It’s the last City Council meeting before the Christmas break, and you know what that means. It’s Christmas Sweater Day! I get to critique the council members’ sense of style and Yuletide spirit.

I must tell you, though, that after watching the meeting this morning, I am deeply disappointed this year with the council members’ commitment to this bit. Last year they did a much better job. This year? Honestly, everyone may as well have skipped the meeting and gone over to Dwaine Caraway’s house and watched FailArmy videos together on YouTube. I assume it’s the mayor’s job to encourage council members to wear their best Christmas sweaters on Christmas Sweater Day. He must be short-timing it. If he intends to put the same effort into his last five months on the job that he put into rallying the troops on Christmas Sweater Day, Mike Rawlings should spare us and instead just spend the time reading Scott Goldstein’s spicy Twitter feed.

Having said all that, let’s get to the sweaters. 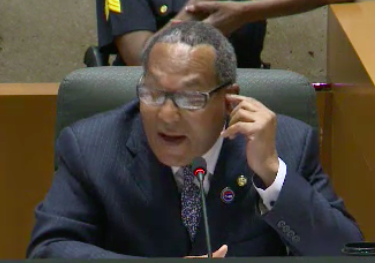 Kevin Felder didn’t wear a Christmas sweater last year either. He clearly doesn’t mind lapel pin flair, though. So why not stick a Frosty the Snowman on there or a Miles Finch? 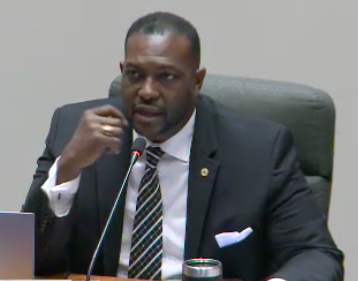 Casey Thomas is like, “If he doesn’t have to wear a sweater, then I don’t have to do it. And don’t call em French cuffs. They’re freedom cuffs!” 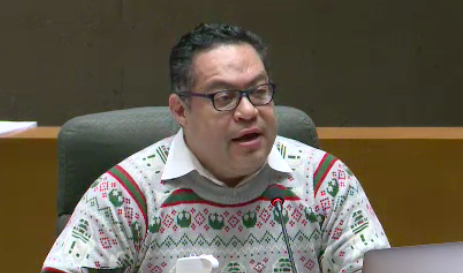 Last year, Omar Narvaez wore a Darth Vader Christmas sweater that went a long way toward making Dallas a world-class city. It was a B_G thing that happened here. This year, he mailed it in. I saw Narvaez on the street in Deep Ellum yesterday. If I’d known he planned to wear this mild-ass Christmas sweater the next day at Council, I would have treated him like the Mink Coat Mob treated LBJ at the Baker Hotel. (Google it, buddy.) 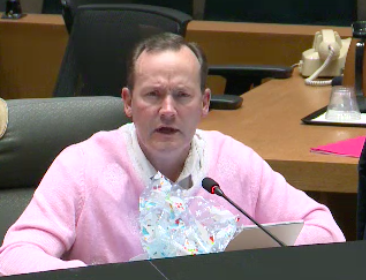 OK, listen. [takes deep breath] That’s not … [shakes head] I mean, if you … [puts face in hands, then runs fingers through hair] THAT’S A DANG EASTER SWEATER! This might be peak Kingston. 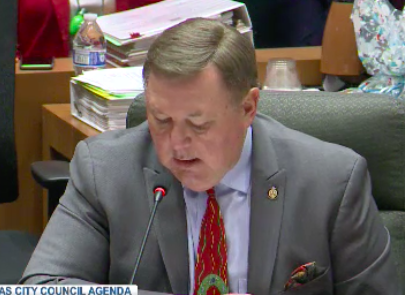 Hi! Rickey Callahan, please. No, I already sent him an email. I’ll leave him a message, thank you. … Councilman Callahan, hi, this is Tim Rogers at D Magazine. The guy who critiques the Christmas sweaters. You know? On Christmas Sweater Day? The main thing I’d like to tell you is that a Christmas tie with a wreath on it tells everyone that you’d like to be a fun guy, but you just don’t understand fun. The citizens of District 5 deserve better. I’m sure they are glad you decided not to seek re-election. 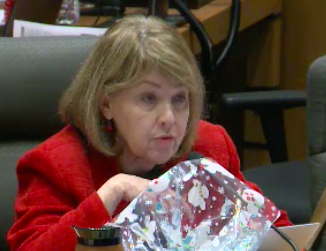 This is a red coat. Sandy Greyson, delete your account. 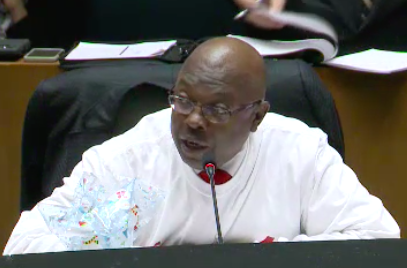 Tennell Atkins caught something shot out of a t-shirt cannon at a Mavs game and then wore it to Council. You can’t see it in this picture, but whatever he’s wearing does have some words on it that I think might be Christmas related. I don’t care. 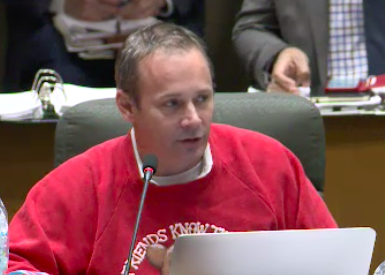 Mark Clayton is my representative on Council, and I’ve had a beer with him before, so I’ll refrain from commenting on his Christmas sweater other than to say I’M NOT VOTING FOR YOU EVER AGAIN, CLAYTON! 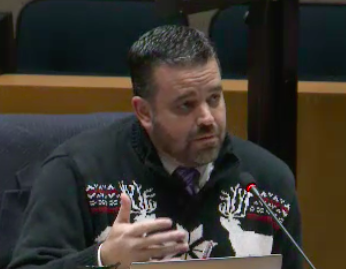 Adam McGough presents us with an interesting question. When you wear the same sweater that you wore last Christmas Sweater Day, are you making a statement about spending a bit more for quality clothes that last as opposed to buying crap that you know you’ll just throw away? Or are you just lame? Especially if that sweater really is just an elk sweater that makes not a single thematic nod to Christmas. 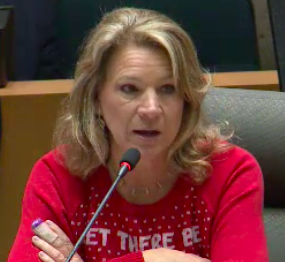 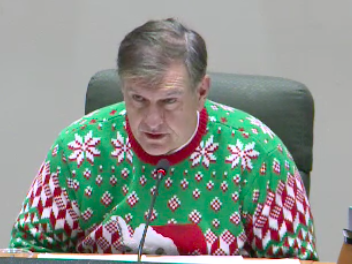 OK. Wait a second. This is undeniably something we’ve got here. I take back what I said earlier. What’s the expression? Leading from behind? Mayor Mike Rawlings might not have gotten the memo out to his underlings (ouch) about Christmas Sweater Day, but he did indeed show up to the horseshoe with his A game, Christmas sweater-wise. This thing makes me want to deck the halls and pave the entire Trinity floodway with 42 lanes of beautiful, sweet, hard-as-calculus highway concrete. 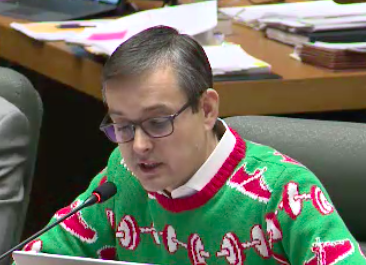 And, lo, a bright star arose over City Hall, and three ink-stained wretches did come to visit baby Councilman Scott Griggs in his manger, where he lay swaddled in a bizarre Christmas (?) sweater that featured sneakers and barbells. If you think this dude isn’t running for mayor, then you don’t know what sneakers are.