The Mavericks are in an interesting position heading into the 2020-21 season. Had Rick Carlisle remained at the helm, this absolutely would have been viewed as a “make or break” year, one in which it wouldn’t have been out of the question for him to get fired midseason had the team been bobbing along around .500 on New Year’s. He knew that, which is part of the reason he opted to leave on his own terms and return to the Indiana Pacers.

It feels odd to put the same referendum on Jason Kidd and an overhauled coaching staff that we would have used to judge Rick Carlisle. Typically, a new head coach — even a veteran — like Kidd would get some cushion. A season, at least. A disappointing inaugural campaign could be explained away with phrases that sound like clichés but actually do have merit. “He needs time to fully implement his system.” “He needed a year to get a feel for the roster.” Things of that nature.

The harsh reality is that Jason Kidd will not, and probably should not, get any of that breathing room. Taking over a team with a 22-year-old MVP candidate, a team that has made the postseason the last two years and looks very similar personnel-wise, means you essentially inherit the expectations of your predecessor. Kidd’s charge is to prove that he and his staff can do more with these players than Carlisle did — and do it immediately. This is reductionist, of course, because even teams without much roster turnover do see improvement (or decline) from their own players. But no one cares about that. The Mavericks need to win more games in the regular season and progress further into the postseason this season, or Kidd’s first season will be a failure. I do not make, nor necessarily love, the rules. But these are the rules.

Which is particularly odd when you step back and realize how good the Mavericks actually were last season. Looking at season-long data from last year is tricky. This is not “making excuses,” but a fact: the Mavericks had more player absences due to COVID-19 than any team other than the Boston Celtics last year. They spent nearly a month without Maxi Kleber, Dwight Powell, Josh Richardson, Jalen Brunson, and Dorian Finney-Smith. The season can be pretty tidily broken down into three segments: pre-COVID outbreak, COVID-outbreak, and post-COVID outbreak.

So how does Kidd get it done? What does “the next step” this year look like? The first piece is obvious and largely out of his control: avoid key contributors missing significant time due to protocols. This isn’t fun to mention, but whether we’re talking about the Mavericks, the Cowboys, or any professional sports team, the reality is you could wake up tomorrow and learn that [insert important player(s) that I will not specifically name for karma reasons] will miss a handful of games. Between Mark Cuban’s approach to the vaccination of his players and the stage of the pandemic we’re in relative to eight months ago, it’s highly unlikely Dallas or any team gets hit quite as hard as they did last year. But, still, it’s a factor. Obviously, there is some noise in this data, as strength of schedule varies across different segments of the season. The team was expected to start a little slow with a change to their starting lineup and Kristaps Porzingis still on the mend after knee surgery. But it’s pretty clear looking at these numbers that Jason Kidd is inheriting a team that would have won 50-plus games in an 82-game season had they just been dealt a league-average level of health. It could have been heavily on the side of “plus”: Porzingis played in 33 of the final 51 games (bottom line of the chart), and Dallas posted a 23-10 (.696) record in those games. Kidd is taking over a team that was very good last season. His extremely tough task is to immediately make it better.

So we got that out of the way. During that final stretch of the season, Dallas went 34-17, ranking fifth in offense and 19th in defense. Those are the vitals of a good, fun team; they are not the marks of a true contender. (A word on what we mean by “true contender”: I find it easiest to simply go with Vegas on this one. When the playoffs start, there are maybe six teams with a real chance of winning a ring. So let’s go with that. Not a dark horse, not a “this team could really surprise some people” designation. A legitimate shot. Dallas opens the season with the 11th-best title odds.)

What would need to happen for Dallas to climb that next rung? Simply put, defensive improvement. You may be tired of hearing Kidd talk defense ad nauseam all offseason, but he knows that history does not lie. Teams that rank in the top 10 on both sides of the ball win titles. Here are the offensive and defensive ratings for the last 15 champions: 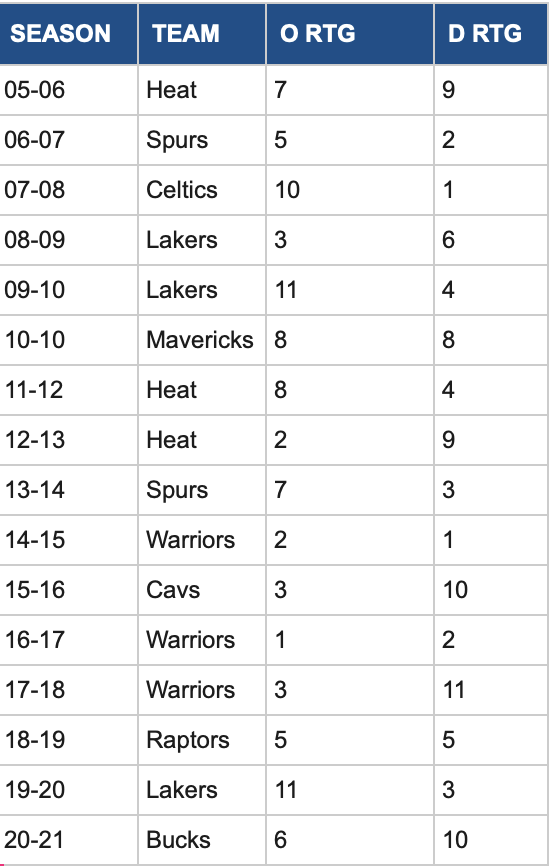 How would they do it? It starts with who is on the floor and when. In his first of what is sure to be many “I AM NOT RICK CARLISLE!” moments as Mavericks head coach, Kidd announced in training camp his plans to begin the season with Dwight Powell starting alongside Kristaps Porzingis. As our own Iztok Franko explains, at first glance, this seems to run counter to the notion of defensive improvement:

“Porzingis-Powell combinations were literally the worst defensive pairing in the league last year, conceding 133.2 points per 100 possessions. Most of these data look bad because Porzingis was terrible on defense last season. He never looked comfortable after coming back from a meniscus injury. His mobility was gone, and he spent last season playing catch-up. To be fair to Porzingis, these same combinations — including Porzingis and Powell together — looked much better a season earlier.”

He’s right! In 2019-20, the Porzingis-Powell pairing gave up 105.3 points per possession, with an offensive rating of 117.1. That was good for a net rating of plus-11.9 (net rating is simply the number of points a team, player, or pairing allows per 100 possessions subtracted from the number of points scored per 100 possessions). Yet again, it all comes down to Porzingis. If you’re getting the ’19-’20 version of Porzingis on defense (and pre-injury Powell), it can work. And opponents notwithstanding, what little we can glean from preseason performance seems to indicate that’s exactly what we’re getting … for now.

I’m not in love with this starting lineup, on either end of the floor. But Dallas is clearly betting that they can get their offense however they want, even if it means a little less of the Luka Doncic-Porzingis two-man game. They’re betting that a fully healthy Porzingis can handle the defensive workload he is sure to see with this pairing.

I do, however, love Kidd’s answers regarding the decision. In a recent interview with Mark Followill and our Brian Dameris on their fantastic podcast Take Dat Wit You, Kidd expanded on the decision. First, on how they arrived at this lineup:

“We have kind of a council: KP, Tim, and Luka. And so I asked them, who would you look at as your starting five? And they all said DP. And I was along the same lines. And so, again, going to them and communicating and asking the players what they thought.”

Another “I AM NOT RICK CARLISLE!” moment right here. He continued — and again, even if I don’t love the lineup, I do love the logic:

“And then I also thought DP would be a great way to start: high-energy, can guard multiple positions, and just does the little things. And I think we needed that in that starting group. DP has been great in preseason. And I think we will see KP at the five, during the game, and we can finish that way. But a lot of times, you don’t always want to throw your first pitch, so teams can get used to that first pitch of KP playing at the five.”

The Mavericks’ rotations will likely be fluid for the first few months of the season. But hearing the qualitative reasoning that led them to this decision, coupled with the quantitative evidence on what a healthy KP-Powell pairing can do defensively, is encouraging.

Schematically, Dallas needs to concede fewer threes and force more looks from the mid-range. For the most part, Dallas elected to drop their big and switch on the perimeter under Carlisle. It’s almost a “bend but don’t break” strategy, and the results bear that out: for the 51 games last season we’re focusing on, they ranked 19th in defensive efficiency. Per Cleaning The Glass, Dallas ranked 12th in share of opponents shots at the rim, 17th from the mid-range, and 17th from three. Those are the marks of a “meh” defensive scheme. The best defenses in the league do everything they can to force you to beat them from the mid-range since most offenses don’t have a weapon like Luka who can beat you from all three levels.

We don’t know exactly how Jason Kidd’s Mavericks will choose to defend or how similar that it will look to his stops in Brooklyn and Milwaukee. But it’s safe to assume many of the same elements will be present. That style is aggressive, and that aggression is physically and mentally taxing on the players trying to implement it. Beyond defense, Kidd has doggedly stressed “communication” since his hiring, with good reason. Healthy, open lines of communication lead to buy-in and teaching. Chances are it won’t be a perfectly seamless transition. In an effort to force extra passes and scramble the opposing offense into turnovers and mistakes, there will be nights when the Mavericks give up a layup line.

But this was a necessary change. The Mavericks were not going to significantly improve defensively with this roster by simply continuing to play the way they had for the past few years. Kidd and new defensive coordinator Sean Sweeney are going to take largely the same roster and try to turn up the pressure on opposing offenses. Dallas is betting that this approach can get them to the edge of being a top-10 defense. If it does, the Mavericks will no longer be anyone’s “sneaky pick.” They will be true title contenders.