Pickleball Is Dallas’ Next Great Sport

The Texas Open might be considered one of its worldwide, grand slam events. Here's a quick primer on the paddle-based pastime.
By Lauren Bannister | July 29, 2019|11:05 am

Subscribe
Advertisement
Six years ago, Jeanne Stasny started playing pickleball, possibly America’s fastest-growing sport. Now she’s the tournament director for the Texas Open Pickleball Championships, September 12 to 15 at the Wagon Wheel Tennis Center in Coppell. The game—combining elements of tennis, badminton, pingpong, and other sports—originated in the Seattle area in 1965 and has spread because it’s social and can be played by anyone.

“Dallas is getting in at a time when the grand slams are still being defined,” Stasny says, “and the Texas Open is on its way to being considered one of the grand slams for world pickleball. It’s already one of the top international tournaments worldwide. That’s exciting for Texas, and that’s exciting for Dallas.” If you’re looking to get started here, here’s what to know and where to play:

The gear. “You use a paddle and a round plastic ball that is similar to a whiffle ball. The paddles are bigger than a pingpong paddle but are smaller than a tennis racket. The court is a badminton court size.”

Best 2 out of 3. “Games are usually 1 to 11, win by 2. You have to win two out of three games to win the match. Whoever the serving team is, is the only one who can make a score. You cannot score on the defensive side.”rnrnGo with the flow. “The game is won by whoever controls the net, and to control the net, you have to be at the net. You have the serve, return of serve, and the transition to the net, and then the point finishes out there.”

Remember to bounce. “The serve and the return of serve must bounce before any other further play. After that, you can volley or hit the ball off the bounce, either one.”

Stay out of the kitchen. “The 7-foot line on either side creates a no-volley neutral zone. When you go into that space, you cannot hit the ball in the air and it has to bounce if you are going to hit it from that space.”rnrnPretend you are bowling. “It’s an underhanded serve. So what I like to teach my players is to hold the ball up in front and when you drop it, follow through like you are bowling. You always serve underhand.”

Remember the power of a dink. “A dink is nothing more than a short shot. You can do a dink off the bounce. If the shot is not defensive and we don’t have a winner’s shot, we are going to hit a neutral shot, which doesn’t give our opponent an advantage to come with an offensive shot against us.” 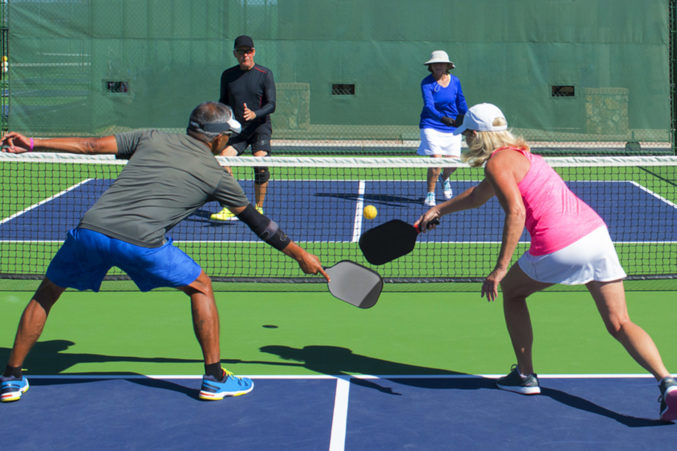 Where to play in Dallas:

As a member of Brookhaven, you have access to four pickleball courts and a certified instructor. The pro shop carries a collection of paddles and balls. 3333 Golfing Green Dr., Farmers Branch. 972-243-6151.

The Robson Ranch community hosts several tournaments a year. Anyone who is a member of the USA Pickleball Association can request to play at the courts. 9400 Ed Robson Blvd., Denton. 940-246-1040.

Dallas’ most important news stories of the week, delivered to your inbox each Sunday.
Pickleball Texas Open