I found my community shortly after the death of my 3-year-old Samoyed, Maya. Suddenly, within a span of four days, she had gone from a diagnosis of heart disease to my husband and I in the vet’s office, holding her head as the euthanasia took effect.

We’re the type of people who treat our dogs like children, so the loss was devastating. I did the best I could to hold myself together. I’d only broken down once or twice at the office and had confined most of my crying to the apartment. A couple days after Maya died, as part of my Saturday-morning ritual, I stopped by Serj, a coffee shop/bookstore by the St. Paul DART light-rail stop. After co-owner John told me his joke of the day and co-owner Anne started working on my iced coffee, John asked how my week had been.

I lost it — in the worst possible way.

Through tears and sobs, I told him about Maya. John and Anne had recently lost their cat. Instead of offering empty words of encouragement, John simply said, “That sucks.” Then he asked if I had a photo of Maya. “I tell you what I’m going to do: bring me a picture, and I’ll sneak her into the mural we’re painting in the back of our store.”

His act of generosity caused me to cry harder.

For the next few weeks, my husband and I walked Maya’s brother, an 11-year-old Samoyed named Miko, around town. Everywhere we went, neighbors inquired about Maya. As hard as it was to tell them what had happened, it was comforting to have so many people ask about her. David at Café Strada gave us a couple free sandwiches. Our apartment’s management office signed a card and left it on our door. We were given hugs by other dog owners.

That’s when I realized that downtown Dallas had become my community.

Twelve years ago, there wasn’t much life to be found in the core. Downtown was a commercial zone with just a couple residential options. But then Downtown Dallas Inc. got involved and started promoting an increase in neighborhood housing. Companies and developers bought several old buildings and converted them from offices to apartments. People moved in — along with their pets. 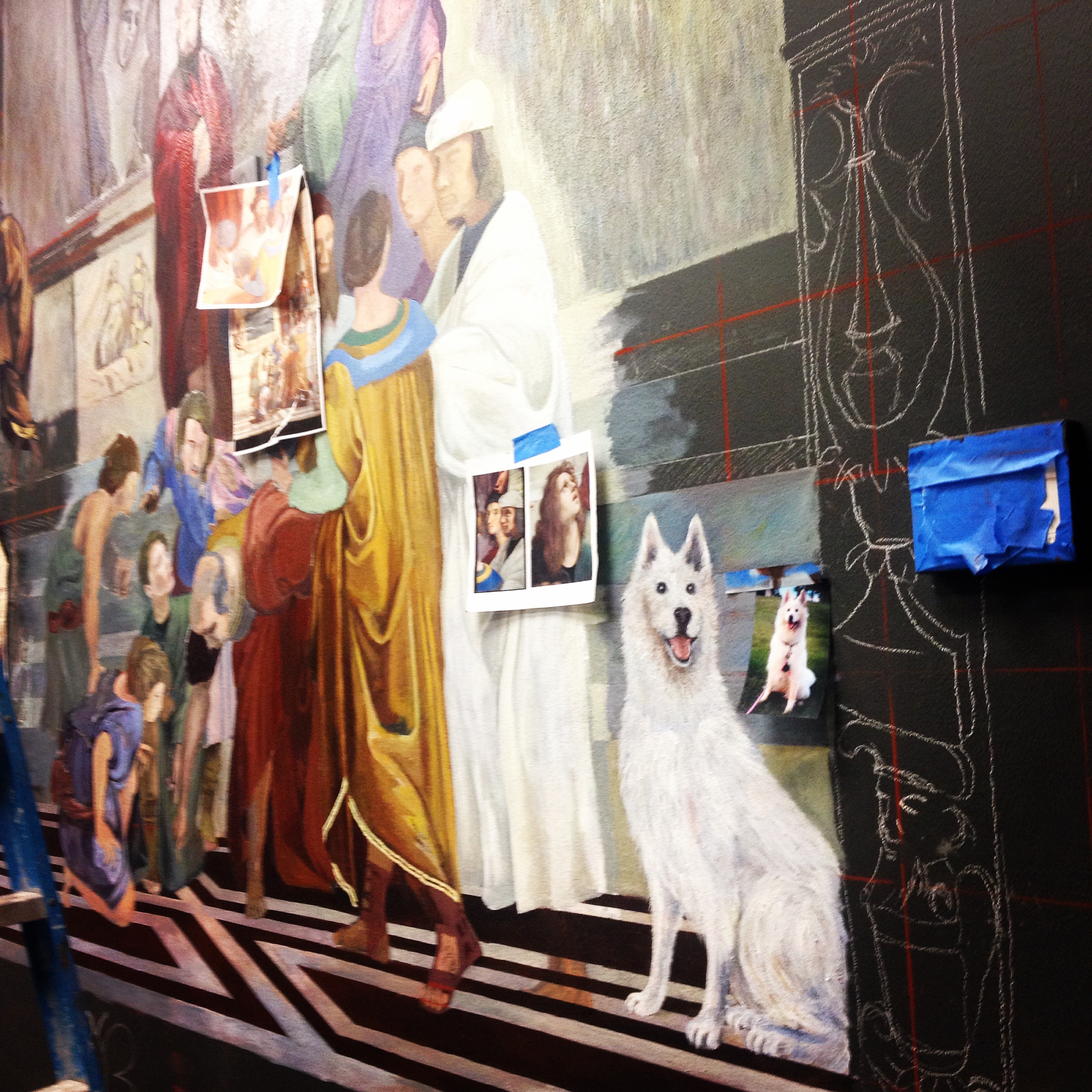 The mural in progress in the back of Serj, featuring a full-sized Maya.

Today there are about 8,200 residents in the central business district. I haven’t kept meticulous statistics, but I swear that every one of them owns a dog, if not two. We hang out at Main Street Garden. Our dogs sniff each other, and we talk. We know all the valets along Main Street, because all the valets along Main Street have treats. Tony is our favorite Safety Patrol officer, because Tony always has treats for our pets.

But downtown is more than our dogs. It’s a burgeoning community filled with people — empty-nesters, older millennials, and young families — who want to be part of something bigger. They’re building a community. They’re creating a downtown where people can live, work, and play. Each one of us takes pride in that. With each rent payment, with every dinner we enjoy downtown, with every treat purchased at Downtown Pawz, we believe that we’re doing something to make Dallas, and our neighborhood, better.

Our efforts are have reaped rewards, thanks to a growing number of businesses moving in to serve this new community. I highly recommend brunch at CBD, drinks at the Woolworth, gelato from Café Strada, and a late-night snack from Green Door Public House. A couple months ago, I stumbled across Kettledrum Allie Boutique, a reasonably priced retailer that had recently opened, with little fanfare, next to CVS. We now have coffee shops that are open on the weekends — a sign of true progress for a neighborhood with a reputation for becoming a ghost town outside of 9-to-5 business hours. A saxophonist has recently set up shop on Main during the evenings. He serenades us as we walk with our neighbors.

But with growth comes challenges. Residents and City Hall are trying to figure out how to protect our core’s history. What buildings deserve to be saved? Which ones should be removed to make way for progress? What happens to existing buildings when new construction blocks their views? What’s the process for answering these questions? We’re constantly talking about parking. Developers want more. Urbanists want less. This is all a result of growth.

We still don’t have a grocery store we can walk to. A lot of businesses close at 3 p.m., when people in the office towers start getting ready to go home for the day. And we have many perceptions we have to change.

I’m the first to admit that downtown isn’t perfect. But I — and my 8,199 neighbors — are also the first to defend it. We’re all working toward a robust, lively neighborhood. We believe in its future.

For now, if you want to know what it means to live downtown, stop by Serj sometime and ask to see Maya. When John said he’d “sneak” Maya in, he meant they’d paint her full-size.

The day he showed me the finished mural, I lost it — in the best possible way.

Back to the Neighborhood Guide

A View of Devonshire

A View of Bluffview

A View of Hillside