The first night I found myself at Te Deseo, dining al fresco, with the breeze on my skin, in the middle of the Harwood District, I felt as though I were on vacation. Blame the background music, which makes one feel like dancing, or the central dining courtyard, whose roof is open to the sky. With a Pan-Latin menu and a seductive name—Spanish for “I desire you”—it reminds me, in the looseness of its atmosphere, of places I’ve known in Mexico City and Guadalajara, where kitschiness doesn’t feel kitschy and your foot taps to an implied beat. Part of that rhythm comes from the way that the inside and outside flow seamlessly, an effortless movement backed by Latin American vibes and endless good feelings.

I had waited, on that first visit, until a very Latin American hour to eat—after 9:30 pm—and I found myself swept up in a night of revelry, watching, ravenous, as glowing mobs of people ascended stairs that were roped off to split the flow of traffic between rooftop bar and interior upstairs bar.

Was it my hunger that accounted for how appealing those first bites were? Our server set down two small bowls of munchy nibbles (giant Inca corn called cancha, chips, and popcorn with wonderful, salty bursts of blackened garlic and jalapeño) along with a trio of ceviches. Of the three, everyone preferred the sea bass with coconut milk leche de tigre, though the mixto—sour and sweet with tomato and some heat that complements shrimp and octopus—is easy to like.

The menu, overseen by executive chef Ty Thaxton, draws inspiration from the mash-up cuisine of the continent to our south, and does it confidently. Some of the food I haven’t had in this form since our splashier avenues to Latin American cuisine—Joyce & Gigi’s and the Peruvian-leaning upscale spot that was Stephan Pyles’ San Salvaje—closed.

The rooms, spread around the courtyard like a labyrinth, are decorated to evoke capital cities: Havana, Rio de Janeiro, Bogotá. Walking from one to another, you may find yourself in a party, and then, in the next, another party, and another, like a Latin American Alice in Wonderland. The answer to what is next is probably another bar, but in a mysteriously alluring way. A tree in the courtyard (or, rather, dead wood painted blue and surrounded by red vines on the walls) reminds me of Hueso, the fantastic restaurant in Guadalajara named after bones and decorated as such. Or a film by Guillermo del Toro—super saturated, surreal.

We drank the Mexican Casa Madero Chardonnay, from the oldest winery in the Americas, a lightly oaked wine full of soft, voluptuous flavors. A Cabernet-Merlot blend perched between old world and new in its style is eminently drinkable with the meats. I am advised by a friend, who makes almost nightly appearances here, that the restaurant has excellent pisco sours, especially the lavender iteration with a good head of egg white foam. But, maybe, it depends: one night, a table full of cocktails was weak. When we asked for them to be remade, our server had another bartender step in and they returned balanced and good. The misstep is the kind of thing that can be caused by a rush on the bar, but not indicative of consistency.

Uptown is all around you, but also fire: wood-fired grilling is primal and primary. Thaxton spent numerous years with Ritz-Carlton in Latin America, and wood-fired cooking is at the heart of a hybridity some might call fusion.

They’re doing seafood—flown in daily—better and more consistently than meat. In a tiradito, strips of yellowtail’s mild and buttery pink flesh, lovely and sweet, spread out delicately, artistically, over a rocoto sauce with marvelous acidity from rice vinegar and lushness and body from olive oil. It’s a beautiful coral. I kept swiping the sauce on my fork, wishing more would stay on the tines. Thaxton also scatters curls of fresh cucumber between the raw fish slices, all bold flavors, but also delicate. I could polish off the plate without thinking about it too much. You feel the closeness to sashimi, which is not far off, given Peru’s history, with its robust wave of Japanese immigration. 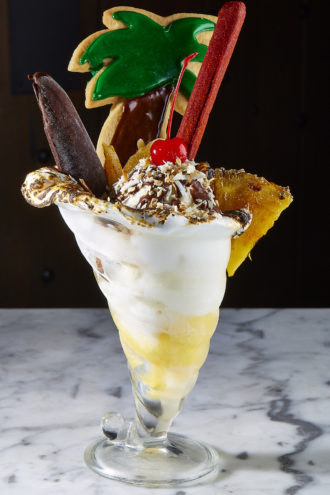 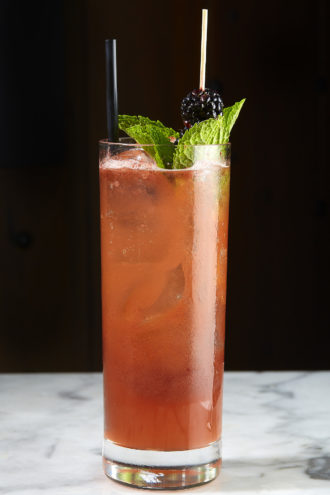 Wood-fired octopus tentacle is presented almost sprawling off the plate, a smear of guajillo sauce seeming to be the only thing anchoring it down. Toasted almonds to thicken send us back to Spain. It stretches your mind a little.

Those good feelings do not extend to the picada Argentina, a mixed-meat platter with Brazilian sausage, New Zealand lamb chops, and bone-in New York strip and filet from Allen Brothers, a family-owned ranch in Northern California. Disappointingly, it doesn’t seem worth the almost $100 price tag. The filet was tender and the New York strip a picture-perfect medium-rare with a dark char, but there was surprisingly little flavor, even near the bone (and the kitchen could have trimmed off a whole section of fat). On this cornucopia of meats, it felt like the flavor was coming from elsewhere. This was also true in the Angosto steak, where it comes from a carrot purée and a heart of palm garnish piled atop.

The meat board, though, is served with a salsa macha like regal butter, a condiment I could spread on anything, rich with chiles and toasted ground peanuts, like the Chinese spicy chile sauce you’d dab at a good dim sum place like Kirin Court. And, behold, the sides, ordered as one would in a steakhouse: heirloom cherry tomatoes tossed until they’re glossy in lemon and basil oil; grilled peppers, which sound as though they’ll have more going on than they do; sliced watermelon radishes and hearts of palm, which have never endeared themselves to me more, soft and almost sweet; borracho beans, which enchant with a whole chile submerged in them, infusing the beans with its fruity aroma and flavors; or smoky poblano rice with earthy, chile flavors.

Other interludes include croquettas with tasso ham, roasted garlic aioli dotted around them, which remind me of patatas bravas. Quinoa salad presented like a tower, with too-ripe avocado and greens, has a  vinaigrette that gets its creaminess from zucchini and almonds—smoky and a little odd.

Desserts are paper tigers, mostly empty bravado. Flan perched atop a tuile perched atop a tres leches cake is bold, but so what? And the sundae: a disaster of scoops of roasted coconut ice cream and mango sorbet stuck with unsettling protrusions of chocolate-dipped banana, tamarind-dipped straw, candied papaya, and a horribly stale cookie shaped like a palm tree.

There was a line of people outside waiting to come in as we left. Not to dine, but to wend upstairs to the rooftop bar, to join an undulating sea of revelers that might rival any Buenos Aires nightclub scene. Take in the city by the roped-off fire pits and avoid the masses if you’re willing to pay for bottle service. The food, the drinks, ultimately, are less important than the space, the scene in this turquoise blue cube.

They know their strength, which lies in atmosphere. They lead you to the jungle. What jungle, I don’t know. But everyone wants to be here.