After ditching a controversial plan that would have allowed for more density in the built-out suburb, Plano tries again to plot out its future.
By Alex Macon | September 28, 2021|2:38 pm
Advertisement

Last year, Plano scrapped “one of the most promising, forward-thinking urban planning efforts in North Texas.” City officials effectively conceded defeat after a lengthy battle with residents who fretted that developing more apartments would change the suburban nature of the city.

The Plano Tomorrow Comprehensive Plan was a loser. Now, nobody likes to be called a NIMBY. So let’s just say that if you live in Plano and the thought of denser development in your neighborhood made you stark-raving-call-your-council-member-mad, well, you came out a winner.

But change is still coming. It has to. The model that Plano has followed for the last several decades, of sprawling outward growth, has hit the wall. There is simply no more land on which to sprawl. Unless city officials are willing to let residents and builders—and tax dollars to pay for all the wide roads and “suburban character”—pass by Plano for new lagoon communities in Forney, the city needs to update the 1986 master plan for development that it is now following.

Enter the plan that should be—but won’t be—called the Plano After Tomorrow Comprehensive Plan. In development for the last year, a draft of the city’s newest urban planning effort is now making the rounds. Per the DMN, public hearings are set for this fall ahead of a City Council vote by early winter.

So will City of Plano Comprehensive Plan 2021 be as controversial as Plano Tomorrow? Should we expect lawsuits and bloodbath community meetings and NextDoor threads with 780 comments?

Looking at the “guiding principles” of this new document, it seems the city is doing its best to head off a repeat of the Plano Tomorrow saga. These two principles in particular leapt out:

“The Plan respects the suburban character of Plano and seeks to preserve and enhance the built environment.

The Plan acknowledges that Plano is mostly developed and does not anticipate significant changes in population or residential development in the future.”

A future land use map (page 6) lays out the guideposts for density and where it’s allowed. 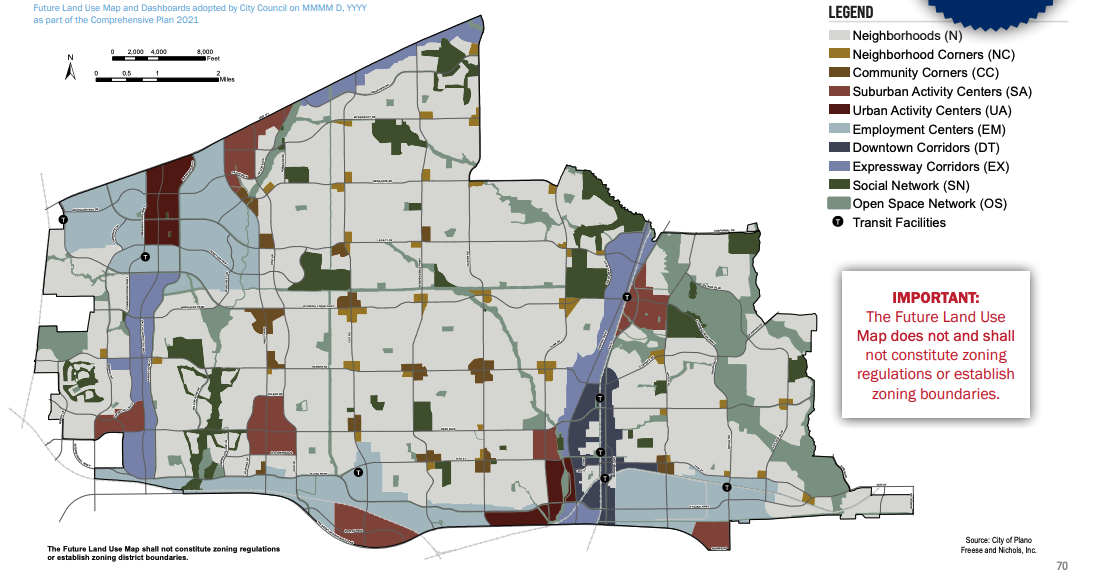 A lot of the new plan hinges on the belief that people will stop moving to Plano in the numbers they have for the last 30 years. From Page 10:

In many cities, the comprehensive plan includes projections for new growth and population. However, with less than 5% undeveloped land remaining and approximately 500 acres currently zoned for residential uses, the potential for new housing growth in Plano will depend largely upon redevelopment of existing commercial sites. This makes accurately projecting Plano’s future population a challenge, as redevelopment is largely driven by factors such as market demand, property owner interest, and individual site constraints. And it also often occurs closer to established neighborhoods, adding another layer of complexity to whether a redevelopment project is successful or not.

That said, here are the plan’s low and high population projections for Plano in 2050, along with what that means for the distribution of single-family and multifamily housing in the city.

The plan goes into some detail on what it deems the appropriate housing mix for various specific neighborhoods. I’ll just leave here the bigger-picture look at which neighborhoods, according to the plan, might be rezoned to allow for new apartments.

Review it all for yourself here.