While you may conjure up memories of bake sales past—Mom toting banana bread loaves and snickerdoodles to school for field trip seed money—the cookie-fueled fundraiser remains timeless. Historically the bake sale has been a tool wielded by women to organize around important causes, like the women’s suffragist movement or the Civil Rights Movement in Alabama.

Radical bakers of today are wielding whisks in the name of anti-racism.

Bakers Against Racism (BAR) launched a movement of anti-racist bake sales to empower communities in D.C. in June, which swiftly grew into an international fundraising effort. Now Texas is running its own BAR-sanctioned project this month.

“Barton Springs Mill was called to action for the effort initially,” retail operations manager Emmy Hangartner said, but they couldn’t get involved as quickly as needed. But the Austin area millery’s owner, James Brown, knew he wanted to participate. Barton Springs Mill donated a collective ton of its heirloom flour to its wholesale customers and home-bakers. 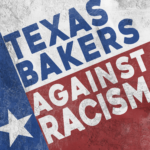 Some of the Dallas participants include James Beard Award–nominated Kessler Baking Studio, which is donating proceeds from its Texas pecan shortbread cookies to the Next Generation Action Network; Bresnan Bread and Pastry has a $35 Baker’s Box filled with goods benefitting the Loveland Foundation; and the sourdough savants at Icon Bread at the Table in Fort Worth is selling loaves for the Equal Justice Initiative.

“Bakers who are participating had to commit to donating 100 percent of their profits to nonprofit organizations that contribute to putting an end to racism, and the unjust treatment of Black people in America,” says Hangartner.

The Barton Springs Mill team hopes that this “collaborative effort will assist in funneling donation profits to as many community organizations across Texas as possible.” Some are even extending their donating sales to last through the month of July, and Kessler Baking Studio has committed to donating proceeds through the end of the year.

Follow along this week to see all the Texas bakers involved in the project @txbakersagainstracism on Instagram.

Update: Here’s a full list of participating bakers/bakeries by region.