Get to know the faces behind some of your favorite local brews.
By Lauryn Bodden | November 4, 2014|8:12 am
Advertisement 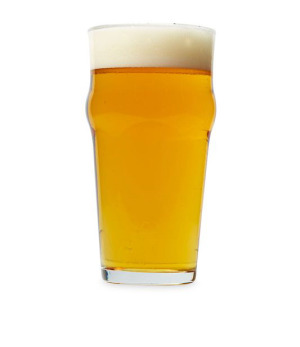 Whether you take your beer from an ice cold can, by the gallon out of a personalized growler, via red Solo cup after a beer pong loss, or straight from the tap, North Texas Beer Week welcomes you one and all. This week we salute the brewers, the bartenders, the open-patio bars, and the people who make those enormous chalices that take your guzzling experience to the next level.

Now, get to know the faces behind some of your favorite local brews.

Q: What is your funniest beer experience?

A: Well, I’ll keep the venue anonymous. But my funniest beer experience was definitely on a visit to a retailer. So, I’m there sampling my beer and the guy is just not interested. He’s way more interested in talking to me about his homebrew. He proceeds to gloat about a casked ale with pork belly. Yes, I said pork belly. “It has a layer of oil on top, like this thick. It was awesome.” I’m shaking my head, on the inside. Then the guy says the most infamous quote, “I like my beer to violate me,” yeah… So, you may not ever find Grapevine Craft Brewery on tap there. And that’s OK.

Q: What is the most important thing you’ve learned from the business?

A: The most important thing I’ve learned and probably the hardest lesson is to never assume. Ask, ask and ask again. And when you get your answer, still don’t assume that you’ve figured it all out. Follow processes always without cutting corners. There is no substitute to thoroughness and always doing the right thing when it comes to making great beer. We have a solid commitment to excellence here at the brewery. No exceptions.

A: Know-it-all beer critics. That’s the answer you expected from me, right? If there’s one thing I’ve learned from being in the beer business and sampling beers with hundreds of people, it’s that you can’t put people in a box. Especially with their tastes in beer. Sometimes, you try to stereotype people and think you know exactly what they’ll like and they blow your mind. That said, everyone has their own opinion. It’s part of what makes this business so much fun. However, there certainly is such a thing as bad beer. But outside of that, let’s just all enjoy what we like, and leave it at that.

A: Well, I’ve had some mighty fine pairings here in DFW. But I’m an ice cream lover. I once had a beer float from the fine folks at LUCK in Dallas. It was house made Lakewood Temptress ice cream scooped in a cold glass of our Sir William’s English Brown Ale. I still talk about that float. A damn fine beverage, indeed.

A: I’m gonna take so much heat for this. But, damn the torpedoes. Look I’m an American and I just can’t drink warm beer. Just. Can’t. Do. It. So yes, even if it was Keystone Light, I’ll take a cold beer please. Now, who else is going to give you that kind of honesty?

Q: What is your first beer experience?

A: I’ll never forget drinking a Sierra Nevada Pale Ale for the first time, easily the first craft beer I ever got my hands on. The lime-green label, the hops, the flavor. Plus, I thought it was really interesting that it was naturally carbonated in the bottle. Years later, having my own brewery, I would discover the complexities of commercial scale bottle conditioning. Now I appreciate it even more.

Q: What is your favorite beer memory?

A: My best memory has to be when I won my first award for one of my beers, Vienna Lager, and it was a big award. The first competition I entered as a pro brewer was World Beer Cup in 2008, the largest international competition and most prestigious on the planet. I wasn’t there, but I got a text from a brewing friend while I was shutting down the restaurant late at night at my old brewpub (The Covey): “Vienna just won Gold!” At first I had no idea what he was talking about, not even realizing the competition was happening, though when I understood what he meant, I just about flipped out. A few tears were shed, I think I kicked a trash can over, really just pure joy. This award was really, in my mind, the first affirmation of my choice to become a brewer. It’s still my favorite one I’ve received.

A: About equally as annoying: bartenders inserting the faucet into beer as they pour… or when someone tries my beer, in front of me, knowing I’m the brewer and says, “It’s pretty good.”

A: A pairing that Chef Sean Merchant and I did years ago at The Covey: Centennial IPA with ahi tuna insalata caprese. The sweetness of the tomato, tuna, mozzarella and the sweet and sour balsamic vinegar couldn’t find a better pairing than our citrusy, fruity, malty IPA that has a slightly bitter finish to balance it all out.

Q: What is your first beer experience?

Q: What is the most important thing you’ve learned from the business?

A: I continue to learn every day. Since starting on this adventure almost three years ago, I’ve always said that the learning curve is vertical. But that’s what keeps it fun and exciting.

A: I think sometimes people get too wrapped up hunting for the white whale of rare beers and forget to enjoy themselves. Beer doesn’t have to be a tricked-up barrel-aged over-hopped beast to be good. Sometimes the simplest beers are the best. That’s not to say I don’t enjoy both.

A: With my belly.

Q: What was your first beer experience?

A: My first craft beer experience was at a friends house. This guy brought over a beer called Mississippi Mud. It came in a bottle that looked a lot like a growler. I tried some because I liked the battle itself. It was a bottled black and tan, and I don’t remember this being particularly great, but it certainly put me on track to try a lot more craft beers soon after that.

Q: What is your favorite beer memory?

A: My favorite memory since being at Peticolas was when I was a volunteer. Michael was the only person working at the brewery at this point. The rest of the help came from volunteers. So he was going in one day at three in the morning to start brewing. I had been volunteering at Peticolas for a week or so, and I showed up at three to help him out. It just kind of hit me then, while we were brewing, of how excited I was to be there. It was my first time in a commercial brewery doing work, and to have it been at Peticolas was really fun. Chances are we were listening to a song our friend Tony Drewry wrote about Velvet Hammer really loud as well.

A: My biggest (maybe my only) beer pet peeve is when people see a dark beer and will not drink it because they think it will be too heavy. Do not drink with your eyes, folks.

A: My favorite beer pairing so far is one we did at Bob’s Steak and Chop House for LUCK at one of their pop-up beer dinners. They did these before LUCK was officially opened, to get the word out. This was their fourth of five courses: Great Scot! (Scottish ale) paired with a lamb shank with braised greens along with mushroom and goat cheese pudding. Wow.

A: Warm beer. Without question.

The annual dining week—ok, really, a whole dang month—is back to its usual summer schedule with 100 restaurants.
By Rosin Saez
Food & Drink

Today, June 25, is Anthony Bourdain Day, which is the late chef and world traveler’s birthday. Let’s look back at some of ways the beloved culinary thinker touched Texas.
By Rosin Saez
D Magazine Directories