Last year’s Cattle Baron’s Ball was a disaster. With no inclement weather backup plan, organizers looked on in horror as a monsoon drenched guests and turned Kaufman’s Star Brand Ranch into a limo-devouring mud bog. This year’s ball chair, Kristi Sherrill Hoyl, rallied her committee, sponsors, and vendors by promising, “The Baronesses will rise again!” And they did.

They moved the famed American Cancer Society mega-million-dollar fundraiser to Southfork Ranch, in Parker, and they had backup plans for their backup plans. But no need. It was a perfect night for The Great State Fair, with its fried foods and midway of games, including a high striker and a Ferris wheel.

For VIPs, the festivities started early in the Ewings’ backyard, with the Apache Belles (from Tyler Junior College) greeting them as they dismounted their limousines. As the party wound down and folks made their way to the fair, a handful of top-tier sponsors discreetly took the stairs up to the balcony of J.R.’s suite for a brief grip-and-grin with CBB opening act Jack Ingram.

In pink leather chaps, Sunie Solomon gave gawkers something to do. And though most of the Escalade buckaroos went with jeans and Western shirts, rhinestone cowboy Shane Walker showcased flower-power dressing with red-rose appliques on his black Stetson and gray jacket.
The live auction got underway with Baronesses ringing cowbells like Salvation Army workers on Christmas Eve. David Barnes dropped a cool $29,000 for a trip for two to the NYC Victoria’s Secret runway show and the official after-party (much to the delight of his wife, Jennifer, and her bud Cindy Gatlin).

Then something unfortunate happened. Hot-and-heavy bidding pushed the price of a Porsche Cayenne Turbo to $3,000 over its $122,000 sticker. High-fives were exchanged and cowbells pealed with delight, but observers noticed that something was amiss. The Porsche bidder had chickened out. From the stage: “A little mix-up happened. Everyone makes mistakes.” Shock! All eyes went to the back-out bidder’s table, only to find that he’d split. But the Baronesses seamlessly handled the situation, putting the Porsche back on the block, and Dr Pepper’s Larry Young, puffing on his Ashton Robusto cigar, sat back and added the Porsche to his evening’s take for a mere $107,000. 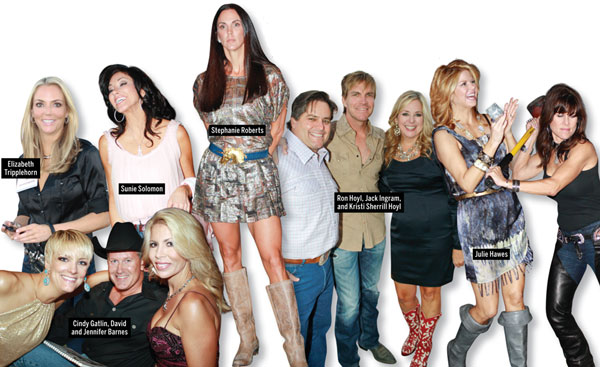