Usually it’s “restaurant plus bar” vs. “bar with a snack menu.” Places that can balance the food and drink even-handedly are rare. One is the Meridian Room in Exposition Park. Now the Meridian has a sibling, the Libertine Bar, that does it even better.

You might initially mistake Libertine for a mere bar. It has a wall of alcohol bottles and a 37-foot-long bar inherited from original tenant Corner Tap. It has a heckuva beer tower in shiny chrome, imported from Belgium, with nine tap spouts, all put to good use with specialty brews. This is, after all, Greenville Avenue; you’d be stupid not to serve booze.

But Libertine also has a kitchen and a chef, Ian Feiwus, who worked at Oceanaire Seafood Room, Nana, and Stephan Pyles. He and owners Simon McDonald and Michael Smith created a menu that incorporates elements from the Meridian—cheese plate, Mediterranean appetizer, bountiful Sunday brunch—and expands into salads and entrées such as beef short ribs. Aspirations are high, with fresh, good-quality ingredients and an occasional stab at trendiness.

A great salad is not what you would expect at a bar, but the Libertine makes them with Bibb lettuce, chopped bacon, grapes, and apples, in made-from-scratch vinaigrettes. Sandwiches get a jump-up with Empire bread, such as the farm bread used on the excellent croque monsieur, with Black Forest ham and melted Gruyère.

For smoked salmon, they smoke it themselves, and it showed in the thickness of the fish—a good half-inch high. It was a 4-ounce portion, firm yet yielding, served with too-dry toast points, capers, and ginger-garlic mayo. Its Asian-style cole slaw would improve were it shredded to a finer dice; trying to consume huge curls of raw cabbage was a chore. 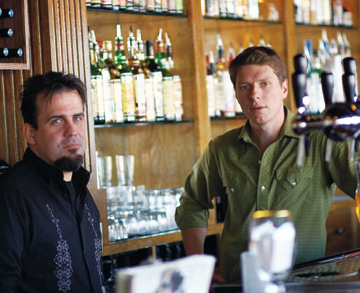 Libertine owners Simon McDonald and Michael Smith. photography by Kevin Hunter Marple
photography by Kevin Hunter Marple
The bar part of Libertine demands that the burger be good, and it was: a round, fat patty with a chargrilled flavor; a toasted, buttered bun; and crisp hand-cut fries made on the premises. Go nuts and order a side of polenta fries: thick rectangles with crunchy, jagged edges and just as greaseless as the regular fries.

They’re also heavily into mussels, in a number of versions, be it curry broth or white wine, with a baguette for sopping. And they’ve already started doing beer pairings—just the thing to highlight the food and wine duet.