Ten years in, the tech CEO is leaning into growth while maintaining an innovative and familial culture.
By Will Maddox | January 4, 2021|4:00 pm 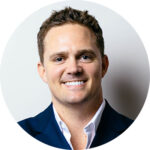 During a pandemic, where time feels like it’s standing still, Dialexa founder and CEO Scott Harper is embracing personal change.

A decade ago, he launched his tech consulting firm in a garage. It now employs more than 150 people and recently doubled its physical footprint with new space in the East Quarter downtown. Dialexa clients range from high-growth startups to Fortune 500 corporations.

Fresh off a hunting trip where he trekked through the mountains of New Mexico, Harper joined me for a patio lunch at Sevy’s Grill. He opted for the Bay of Fundy salmon; I had the grilled chicken salad with apples.

At any given time, he says, Dialexa works with about 15  different companies. Some are more established names looking to invest in technology to create a strategic advantage; others bring new products to market. Recent projects have involved launching an autonomous robotic lawnmower company and helping an “extremely large” automaker transform its relationship with dealerships.

Dialexa is neither marketing nor back-office tech support; instead, it facilitates the convergence of technology with the core of what businesses do, creating custom solutions that turn any organization into a tech company. Local clients include Topgolf, MoneyGram, and Sabre Corp.

“It doesn’t matter if you’re automotive, commercial real estate, or telecom, you’re going to differentiate and win with technology in the future,” Harper says.

Like many businesses, Dialexa experienced a significant hit during the pandemic, as companies took a breath to figure out what outside services they could afford.

“It’s not like a traditional recession, where you have some runway to do something,” Harper says. “This was near-immediate–we had clients whose revenues essentially went to zero.”

But business has rebounded nicely, and Dialexa is now hiring new employees and continuing to grow.

As the company expands, Harper’s role has grown, too. From doing everything needed in the early days, he now spends most of his time on strategy, client relationships, and casting vision. Still, he wasn’t always clear-eyed about the transition.

“You have to embrace that journey, or else you can feel very lost,” he says. “What got you from A to B doesn’t get you from B to C. You’re constantly in that reinvention of yourself, and you have to look at what’s most valuable for the business and what you enjoy doing.”

Harper is hyper-focused on the company’s inputs, such as hiring the smartest people he can and creating a space and culture that makes employees excited about coming to work. He tries to maintain a family dynamic, even as the company grows.

“I don’t look at it as change—it’s an evolution and a progression,” he says. “I think that we’re getting better and better over time. That’s how I see it.”