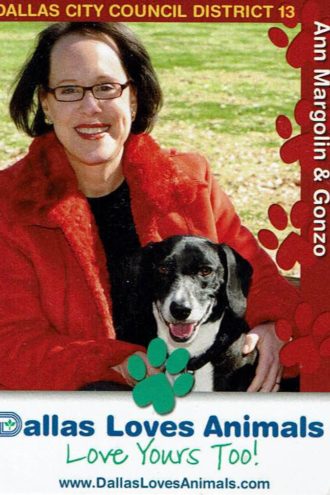 “Since I started Robokind, Gonzo has taken part in an uncountable number of photoshoots and audiovisual pieces. He doesn’t freak out when a bunch of strangers show up and bring a lot of equipment in, and he can stay quiet on the set. It’s not a normal thing to ask of most dogs, but that’s the weirdness that is my life.

When my mother was on the Dallas City Council, she used him for a couple of SPCA initiative photo shoots. And just because he is kind of cute in that weird, awkward way, he ended up in a photoshoot for AT&T for a Valentine’s Day thing a few years ago.

He was ‘discovered’ as I was walking him through Main Street Garden Park. We live downtown, and it’s nice having a few dog parks within walking distance, because Gonzo is pretty social, both when it comes to people and to other dogs. He always wants to say hello to everyone.”

Look At All These Adoptable Dogs at Dallas Animal Services