Let’s be honest: Dallas palates may be sophisticated, but more business deals are probably closed over a cheese enchilada platter or double hamburger than chateaubriand for two. Not that there’s anything wrong with that. We may enjoy the latest culinary trend and exotic protein de jour, but our hearts and taste buds always come back to the simpler pleasures: comfort food.

Lately, fried chicken has taken the spotlight, with area chefs elevating the common bird to new gastronomic heights. Next up: the lowly hot dog. Gourmet franks are a national trend, and celebrated Dallas restaurateurs such as Phil Romano and Alberto Lombardi have new dog houses on the horizon. But Richard and Tiffanee Ellman (Oak) and John Paul Valverde (the recently shuttered Campo Modern Country Bistro) have beat them to the dogfight with their new Bowery in Uptown.

Housed in a quaint cottage along trendy McKinney Avenue, Bowery exudes a dark, masculine vibe. It’s heritage cool, clad in dark wood and photos of New York circa 1920s. The restaurant is named after the New York City’s Bowery District, where German immigrants sold sausage in push carts back in the 1860s. Even the wax paper that surrounds Bowery’s hot dogs resembles vintage newsprint.

However, Bowery’s hot dogs are anything but old school. Forget wimpy picnic weiners and typical toppings. These are big, messy, two-handed meals, stuffed with plump franks and piled high with exotic ingredients. Many of Bowery’s creations sport a global flair. My favorite was the Moroccan dog: A housemade lamb merguez sausage, topped with harissa slaw, and apricot jam. Ask for an extra side of jam. The fruity sweetness tempers the heat of the sausage and fragrant slaw. For a more soothing option, you can’t get much more comforting than Bowery’s croque madame. A classic weiner was smothered in thinly sliced ham, Swiss cheese, and creamy, rich bechamel. A fried egg— the yolk dripping between my fingers bite after bite—capped off this Parisian treat. Asian flavors highlighted the Vietnamese inspired banh-mi dog with its housemade pork sausage, pork belly, cucumber, scallion, and pickled daikon. 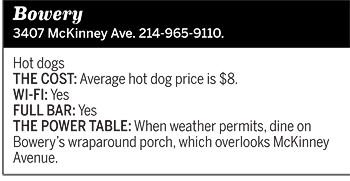 All these culinary touches will cost you. Most dogs average $8. The Duo of Duck—with its duck sausage and seared foie gras—is $18 and, frankly, not worth the price. But the rest of Bowery’s gourmet menu is worth every penny, making the new Uptown restaurant a real—pardon the pun—weiner. (No, really. Sorry.)