Opportunities like these don’t come around very often, and the partners behind the new Field Street District are determined to get it right. Kaizen Development Partners, Woods Capital, and Dundon Capital acquired two prime tracts on McKinney Avenue at Field Street this past summer, and have selected HKS Inc. as lead designer on their new mixed-use project. 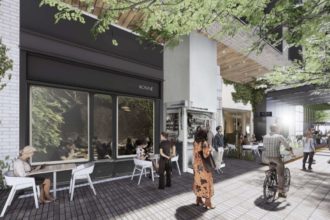 Field Street District will include as much as 40,000 square feet in amenity space, mostly restaurants and resident/tenant services. 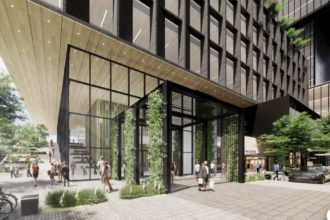 “To be able to influence the Dallas skyline in a meaningful way, with what we’re doing vertically and horizontally—rarely do you get a chance to do this in an urban environment,” says Derrick Evers, CEO of Kaizen Development. 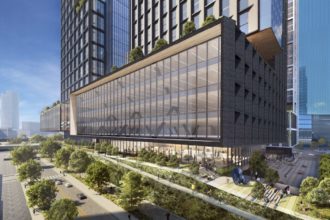 The lead architect on the project is HKS Inc.

Along with HKS Inc., Beck is working on pre-construction and Kimley-Horn is the civil engineer. The project is getting support from Downtown Dallas Inc., DART, the City of Dallas, and other stakeholders, says Jonas Woods, CEO of Woods Development. “Everyone sees this as an important domino that needs to fall for the continued recreation of the urban fabric to take place,” he says. “It’s an incredible placemaking opportunity.”

The vision is to create a verdant neighborhood that’s grounded in nature. HKS was selected to lead the design, Woods says, because the firm paid a lot of attention to the ground plane: “It’s fundamental to the success of everything above … One of the concepts HKS came forward with is the idea of an elevated walkway on top of the DART rail line that runs along the property.”

The partners expect to break ground in the summer or fall of 2020, depending on preleasing. Interest in the project among brokers and potential tenants is brisk, Evers says.

“We’re hearing about some great deals in the market that are too big for some of the boutique buildings in Uptown,” he says. “We don’t have those limitations; we have the ability to do more than 1 million square feet. We’re holding a big catcher’s mitt.”

A Tiger Woods Book You Should Check Out