Step inside the home of Sarah and Adam Saxton and witness surroundings that belie the couple’s respective years.

Its thoughtful composition and eloquent design forms an impression of inhabitants with a more experienced residential resume.

In fact, their Midway Hollow home marks the third address for the 30-somethings and the couple’s first-ever build—prompted by the impending birth of their twins, Patrick and Harry, and their two large dogs. With lots in the neighborhood in short supply, they ultimately purchased a small home on a nice patch of land and had it cleared for construction.

Miles Durham, the builder of their previous home, was called in to execute the 14-month project. He, in turn, recommended architect Scott Marek, who formerly worked under local architecture legend Frank Welch, to draw up the plans. 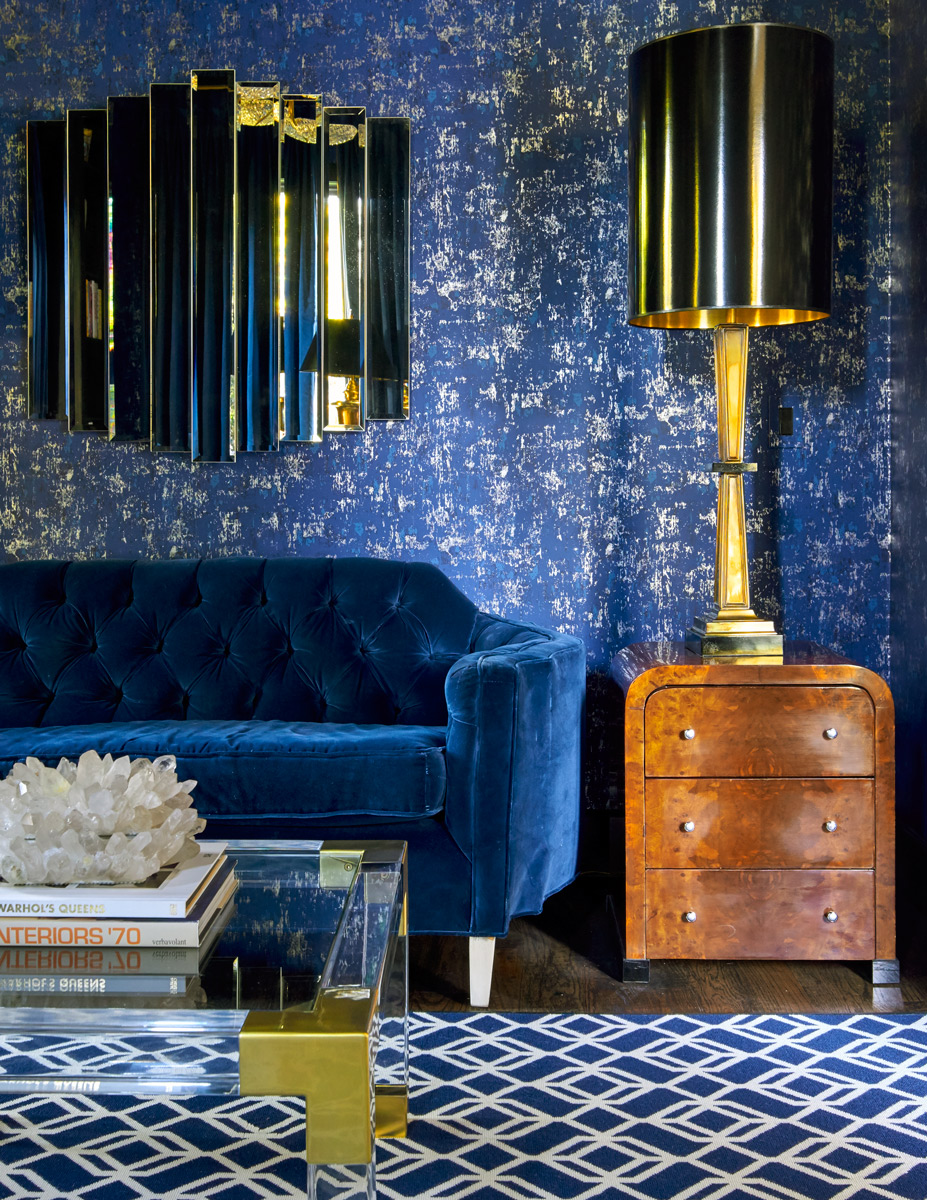 Photography by Nathan Schroder
James united a mirror from the ’70s, a pair art deco-style miniature chests, a pair of large-scale brass lamps, and a Lucite coffee table (all from James McInroe Inc.) with the couple’s tufted blue velvet sofa and Ello mirror carried over from their last home. He covered the walls in a metallic paper by Osborne & Little. A quartz box from Madison accessorizes the table. Photography by Nathan Schroder
Scott’s mission: to blend Adam’s modern predilections with Sarah’s more traditional appetite. The couple supplied Scott with a heaping pile of incongruent ideas, spanning styles from modern saltbox to Georgian Colonial. “It is very difficult to get to the essence of what a client likes about an image,” explains the architect. Each contains a ton of information—budget, color, details, etcetera. Synthesizing that down to a coherent whole is sometimes challenging. Ultimately, it is the feeling we strive for, not an exact replication.”

“He nailed it,” Sarah says of Scott’s work. His triumph is revealed in a house exhibiting traditional proportions and symmetry, but constructed using modern materials, including white stucco, ebony-stained wood, commercial windows, and a metal roof.

Equal consideration was given to the home’s interior framework, with functionality taking the lead. To the Saxtons, that meant one generously sized expanse doing triple duty as the kitchen, living, and dining spaces. “In this house, we wanted to use every single room—no rooms just for show,” she says of the 3,800-square-foot soft contemporary.

I think draperies add architecture to a house.

When it came time to choose a designer, Sarah didn’t hesitate, tapping James McInroe, who had created the interiors for a friend 10 years prior. “It was the first house I’d ever walked into that I was like, ‘This is really cool,’” she remembers. “We didn’t even consider anybody else.”

James articulated the couple’s style in a warm, tonal palette of topaz and ochre hues and a multi-era collection furniture, some they brought with them and others he selected.

The designer bestowed a measure of sizzle where he deemed appropriate. In the cobalt library, velvet upholstery and metallic wallpaper deliver as much drama as any volume on the black enameled bookshelves. He tucked the room’s drapery underneath crown molding, a stealthy trick for preserving the full width of the library windows: The draperies actually hang in front of the walls, James reveals. The room is Adam’s favorite for enjoying his morning coffee, and it’s where cocktails are served when friends come for dinner parties.

In the living room, heavy satin draperies hung at ceiling height glamorize and parcel off the space. “I think draperies add architecture to a house,” James says. But for as lavish and dressed-up as the interiors appear, the design reality involved smoke and mirrors. With two 2-year-olds, the Saxtons required furnishings that were as durable as they were beautiful. James turned to commercial carpets and kid-proof textiles: Lizard-embossed vinyl poses as leather on dining chairs. Indoor-outdoor velvet postures as top-drawer cloth on a pair of Milo Baughman–style sofas, which James sized for the room as well as Adam’s 6-foot-4-inch frame. 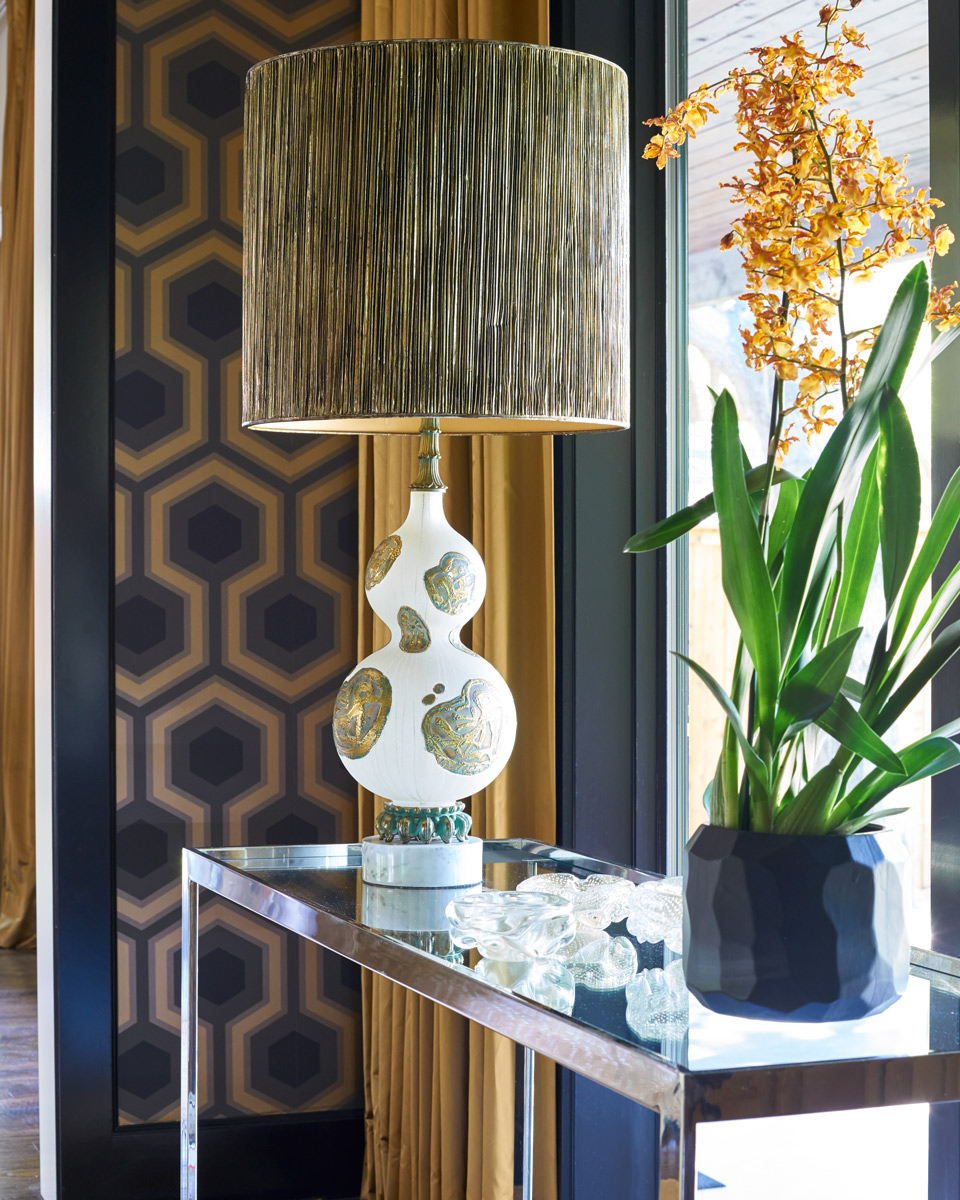 Photography by Nathan Schroder
A vintage, etched-glass lamp with gold leaf medallions and original metallic gold shade features on a 1970s chrome and Carrara marble bar cart, both items from James McInroe Inc. Photography by Nathan Schroder
Aiming to delineate a dining room within the wall-less communal space, James chose a hexagonal David Hicks wallpaper, which he inset in a framed-out nook between the kitchen and entry hall.

Sharing her designer’s infatuation with wallpaper, Sarah went with a scene-stealing Matthew Williamson–designed pattern for the powder room. “I’m not scared of wallpaper at all,” Sarah says. “But if I had done it on my own, I would have played it a lot safer. James gave me the confidence to say, ‘Okay, you can totally put tigers in your powder bath.’”

As the rooms took shape, James would introduce what are arguably the home’s most arresting design elements: the mix of vintage lighting. The couple quickly realized that illumination was their poison—and they were hooked. Sarah admitted to blowing the budget on a pair of globe pendants in the entry hall, the library’s J.T. Kalmar fixture, a Gaetano Sciolari chandelier crowning the dining room, a collection of table lamps, and the imposing Tommi Parzinger leather-and-chrome chandelier that stars in the master bedroom. “Not many people put a giant chandelier in a bedroom, but I think it’s perfect,” she says.”

For the first-floor guest bedroom, Sarah led the design charge—not a stretch for the homeowner who studied interior design at Oklahoma State University. Her proclivity for fearless choices is evident in the Brunschwig & Fils abstract animal print dressing the walls and upholstering the headboard. “I don’t live in the room every day, so I wanted to do something bold in there,” she says.

When designing a kid’s bathroom, especially around wet areas such as the toilet, sink, and bathtub, ensure the surfaces are easily cleanable and durable—Think Ceramic wall tile and scrubbable wall paint.

The design-minded couple took their talents upstairs, making the floor’s furnishing selections entirely on their own. To impart a locker-room feel in the twins’ bathroom, they lined the walls with black and white subway tiles and chose a penny-tile mosaic for the floor. They outfitted the space with a commercial utility sink, claw-foot tub, and frosted-glass door playfully marked with a men’s-room symbol. “We love that room,” Sarah says. “We get more comments on that than anything.”

“It was so much fun,” Sarah says of the process. “As soon as we moved in, we were like, ‘When are we going to build again?’” But don’t expect to see a for-sale sign anytime soon. The Saxtons plan on staying a while—putting down roots, entertaining, and maybe even building a pool. “We’ve had a lot of people say, ‘This is so grown up,’” she says. “I kind of wanted it to be.”