It was never part of the plan that I’d go hunt down and eat the 2-pound chicken tender. I was only there yesterday, Opening Day at what will soon be the old Globe Life Park, to talk to baseball fans about this being the stadium’s last year.

But then my editor texted me.

“Shawn eat that chicken tinder,” he said, himself needing an editor. “You can expense it.”

Here’s the thing about journalists and free food: we like it. Even if it’s overgrown farm fowl. Besides, the text came at the right time. They’d packed up the press box buffet before I’d had the chance to dig in. I don’t find myself in a press box often, or ever, so that had come as a surprise. I’d eaten a little popcorn, one of the top five foods most closely resembling air, and then came his text.

We were in the bottom of the 6th inning. Most of my reporting was behind me. In my stack of media information I had a sheet telling me exactly where to find the chicken, section 50, in the outfield. I giggled again at Catherine’s kicker. Just how much content could one small web team squeeze out of a two-foot chicken log? I decided there was no harm in finding out.

“I mean they did just yank the press box food away before I could fill up,” I texted, clearly still bitter. And then I started to trek.

The press box at Globe Life Park is behind home plate, on the club level. The walk was fine. I followed the red dot, who’d just came in first place in his on-field race and was now being handsomely rewarded with drunken praise and touching.

As I got closer to the Budweiser Bullpen Patio, I started to see people toting bird. They looked scared.

I kept walking. I came to the “Flew the Coop” chicken stand. You could buy a hand-breaded chicken tender basket for $15.50. You could get chicken and donut sliders for 14 bucks. I wanted The Fowl Pole, $27.50 (while supplies last).

A shiver crept up my spine.

Sauce options: sriracha ranch, habanero honey mustard, spicy BBQ, regular ranch, and regular BBQ. I made my purchase on a digital screen. I’d venture a guess there weren’t many others who bought a Fowl Pole and kept the receipt.

As I waited, one person received their Pole and pumped what I would legitimately estimate as 15 ounces of ketchup onto a drink tray. Another dude got his. And then it was just me and one other patron, a woman who’d been waiting just a touch longer than me.

And then—and this is absolutely real—the worst possible thing happened.

“No more Fowl Poles after her,” said a gentleman behind the counter, seemingly unaware that his words could hurt people.

My protest came swiftly. I had already paid for one of those, I explained.

“Didja?” he said. He told a woman that they needed another, she went into the back, and when she emerged the issue was resolved. They’d somehow produced one. A modern miracle.

The stand was out of sriracha ranch and habanero honey mustard, I was disappointed to learn, so I settled on spicy BBQ and ranch. The final out in the top of the 7th must have happened while I was positioning my sauce cups for security, because when I turned from the counter it was time for the stretch. They played God Bless America, as is tradition, and for some 30 seconds I gazed upon the American flag with my countrymen and women, holding at my side a 2-pound block of glued together chicken breasts atop a golden bed of waffle fries in a cardboard suitcase. 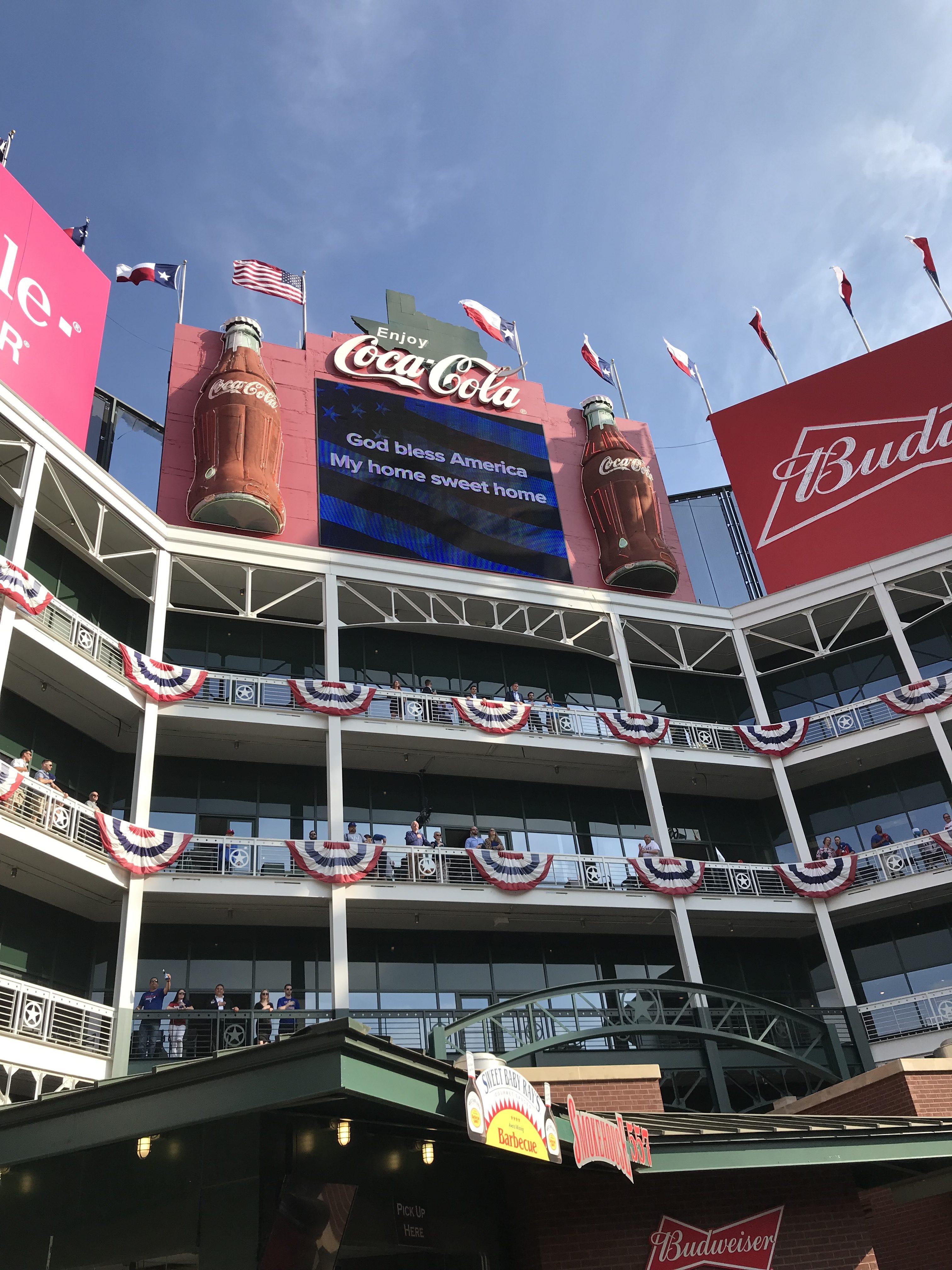 Where do you eat such a thing? The picnic tables in the area were full. It’s possible I could’ve found a spot to perch somewhere in the vicinity. But I went for the sure thing. I embarked on a journey three levels up, back to the other side of the stadium, where I’d seen a row of empty picnic tables baking in the spring sun.

I felt vulnerable to bumps and knocks the whole way, but I made it, and I took this photo of the chicken looking—you know it and I do, too—fine as hell. 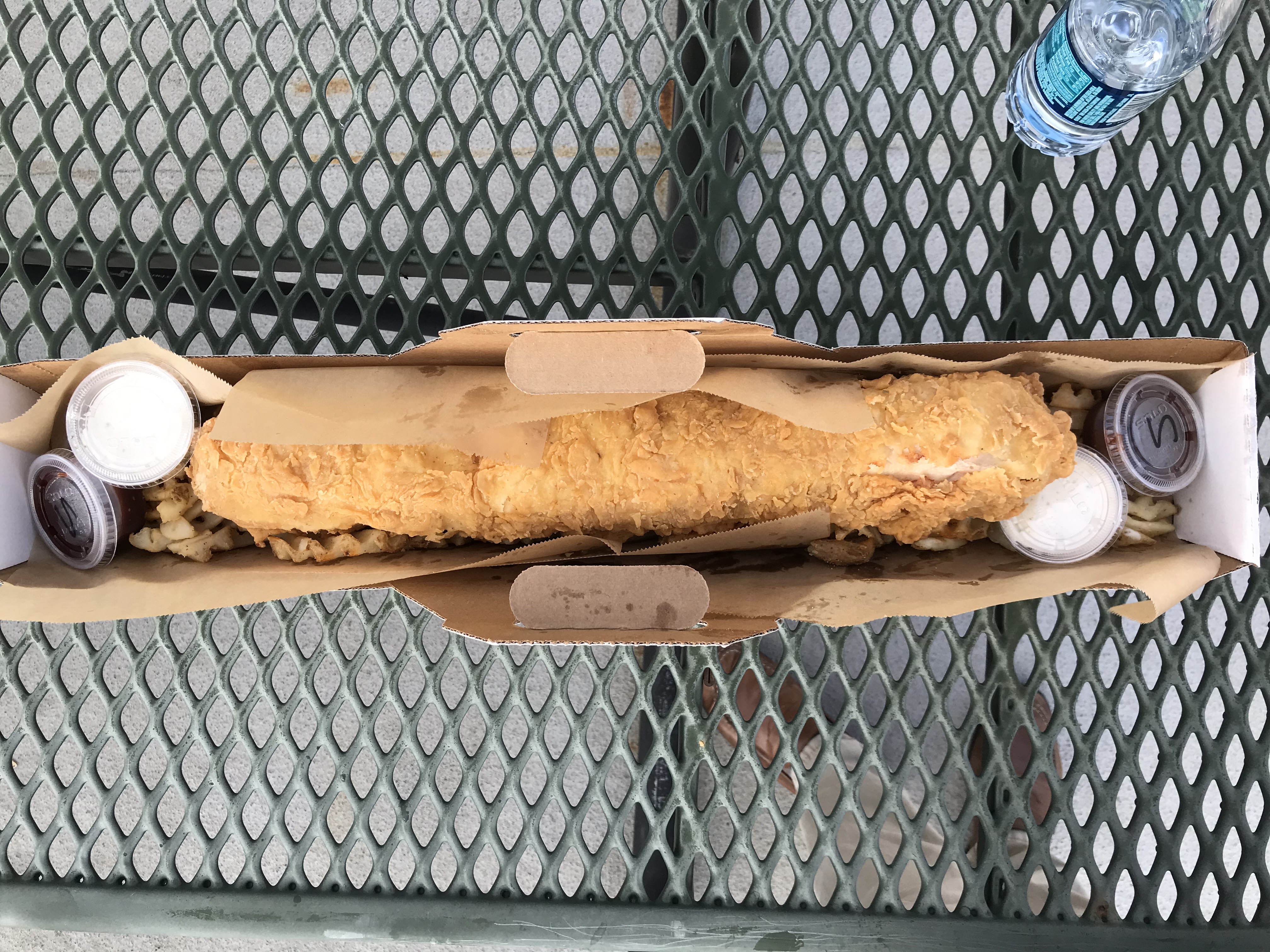 That is, without a doubt, the best it would look.

It didn’t take long for the Fowl Pole to attract attention. Up here in the cheap seats, it was outside its natural habitat. Yet this was the land of the everyman, deserved of such a culinary adventure.

A pack of five bros approached as I was taking my first bites. Three of them refused my offer to share. Two said yes. Setting aside some minor breading-to-chicken ratio concerns, they loved it.

I might point out here that by this point these gentleman had had the benefit of having indulged in a few of the concession stand’s other offerings, a cold pop or two. One of them was absolutely insistent that the headline to this story be, “Tastes Like Chicken.” I feel he could have made a healthier editorial judgment had he been of sounder mind. Anyway, to them, this big bird was beautiful. I wasn’t going to bust their apple bags over it.

My true thoughts? Oh, I don’t know, on bite one, it seemed passable. On a 10 scale, an expectation-adjusted 6 or 7. Edible. I think I looked at it too closely, though, studying the fusion between the individual chicken breasts. I noticed the white residue, the same stuff you might find seeping out when you bake chicken at home—apparently a mix of protein and water—except there was lots of it and it had toughened and adhered to the outside of the naked hunks of chicken. And, if we can talk about that for just one second, have you ever seen a chicken breast baked without a hint of seasoning? You don’t want to. You’re just way too aware that you’re gnawing on flavorless flesh. There was an oily taste I couldn’t quite get over, either, which made me think these things were mainly baked and then just quickly dipped into the oversized fryers, so that the oil never had the chance to really, you know, sink in. Is this a thing? My mind went places.

Should you get The Fowl Pole? That’s not a question I can answer. That’s a personal question. I can say that after the bros left, a couple came up and remarked that I looked very happy eating it. I said that I was. It was a beautiful day for a chicken tender, but aren’t they all? 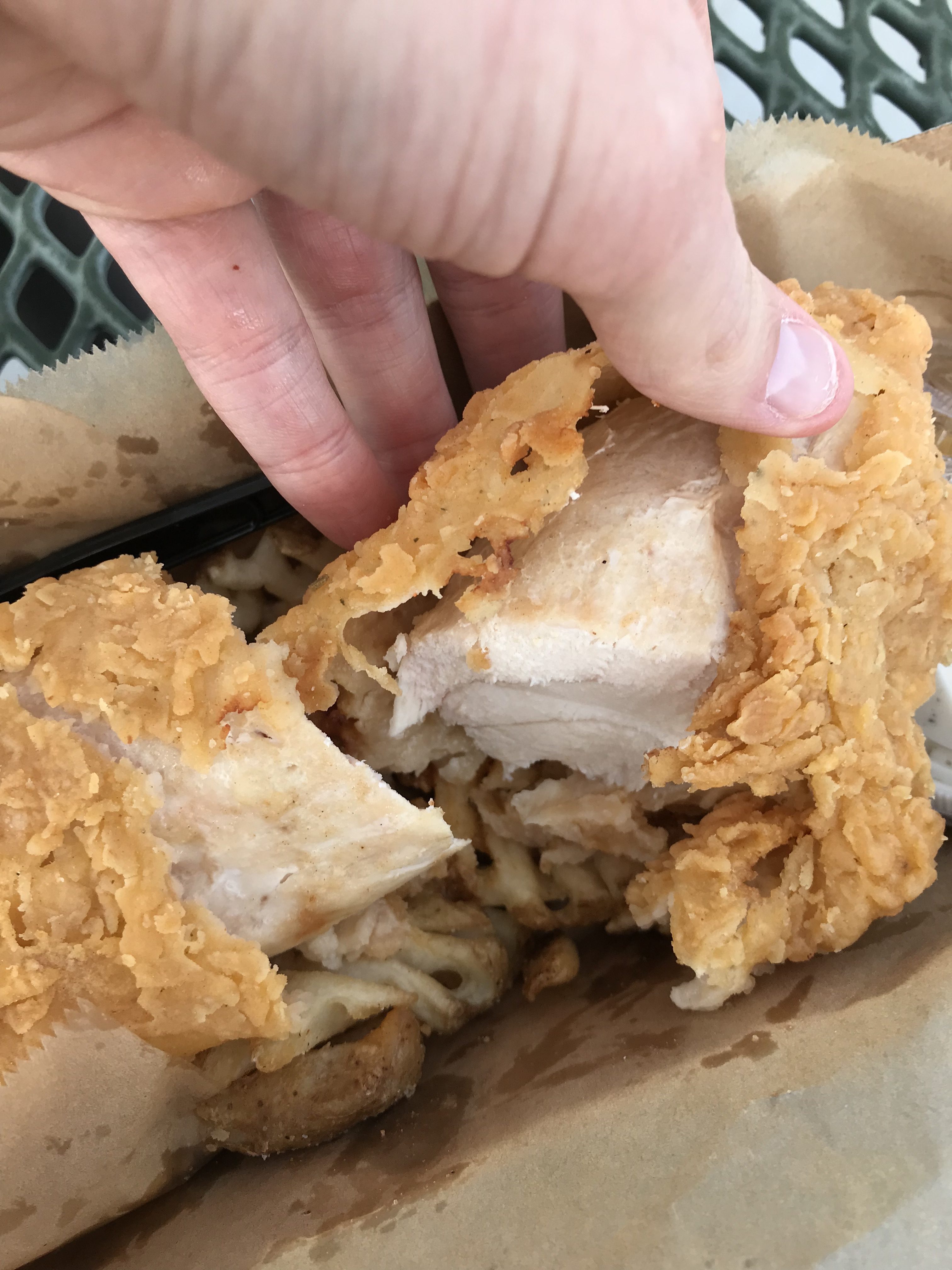 Today, June 25, is Anthony Bourdain Day, which is the late chef and world traveler’s birthday. Let’s look back at some of ways the beloved culinary thinker touched Texas.
By Rosin Saez
Events