At 2 in the afternoon at the Knox Street brasserie Up on Knox, it can seem like everyone is sipping a crisp white wine and finishing the last of their brown-butter trout almondine or brilliant-green fava bean hummus. There are changes afoot in the brasserie in the months since the pandemic. Quietly, Bruno Davaillon, our city’s only Michelin-lauded chef, joined fellow Frenchman-restaurateur Stephan Courseau to update the menu of this sidewalk bistro. But the duo is dreaming beyond bistro fare.

Courseau and Davaillon have their sights set on opening two new restaurants in the next two years. To sit and talk with them is to see two minds mingling. Their forthcoming restaurants have great potential to move the city forward with French food. Here’s what the Frenchmen have in the works, now and in the not-so-distant future.

But First, a Reunion

It feels fated. Last spring, when the pandemic hit, Bullion, where Davaillon had settled as executive chef shuttered, and in any event, Davaillon had announced that he would no longer be in the kitchen there. Over the summer, the men approached one another. The stars aligned. And so in September, Davaillon started at Up on Knox, quietly slipping in with his chef’s whites, leading a team already in place.

Courseau’s bistro still felt to him like a work in progress. He liked the casualness and the fact that of all three outposts of his restaurant world, it attracted the most diverse crowd. But he felt he could do more.

Davaillon came in, not with an attitude of “On change tout!” (“We change everything!”), Courseau says, but using his technique and the fine mentorship skills that are his forte to bolster what was already in place.

A conversation in, and it’s clear the two are speaking the same language, wanting “a kind of grace in simplicity” and no hiding behind gussied-up fanciness, but rather wanting people to be at once surprised and comforted. 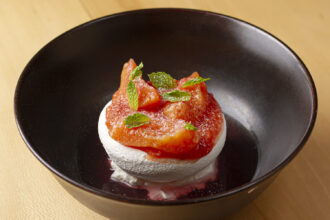 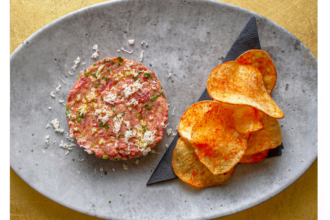 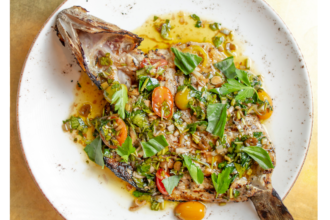 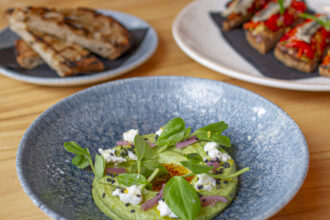 Courseau always yearned for a true chef-partner. “It was always missing for me,” he says. And so Davaillon has made little, but important changes at Up on Knox. They involve shoring up technique. Sharing and imparting in the way that he did at the Mansion.

For now, the brunch menu is staying the same, though Davaillon has altered lunch and dinner. He’s already been quietly serving specials, like halibut or soft shell crab that regulars know to order. And he’s putting his pastry background into play, bringing out desserts like a simple tarte aux fraises with a pâte sucrée.

For the steak au poivre, the sauce is lighter (whereas it’s creamier at Le Bilboquet) and the green peppercorn dominates. “[It’s] the green pepper of my childhood,” Courseau says. They can both agree on the perfect pommes frites with a perfect spirit of synchronicity. They’re twinned in more than taste memories—these two chefs who know French cuisine thoroughly, but have cooked in the United States and know what American diners want.

That two-step, in fact, weaves through their entire careers.

In 1987, at the age of 21, Courseau arrived fresh and without a speck of English in New York City. He started as a dishwasher. But it was in the heady, giddy whirlwind of Manhattan’s Franco-New York bistros of that era. He lived in the French-steeped atmosphere of a time when toques from across the pond reigned supreme, and he could find his footing.

He and Davaillon, a native of the Loire Valley, swirled around the same figures. Icons like Alain Sailhac, Jean-Georges Vongerichten, Daniel Boulud, then later Alain Ducasse.

Courseau remembers that the emerging superstar Boulud, who was working under Sailhac at legendary Le Cirque, would come every Sunday and have a steak tartare at Le Bilboquet, the Upper East Side darling with rattan chairs and a zinc bar where Courseau got a job and which he later brought to Dallas.

From there, he became a manager at the famed bistro La Goulue and at Vongerichten’s JoJo, which is still a paragon of lightness and imagination in an airy townhouse. Courseau says he had been “emerveillé,” amazed, at what Vongerichten was doing there, and what he had been doing at the Drake Swisshôtel, which he transformed the same year Courseau touched down.

Courseau later managed DB Bistro Moderne for Boulud, who was amassing a French-American empire of his own. 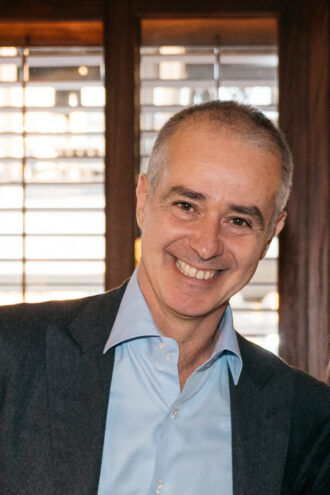 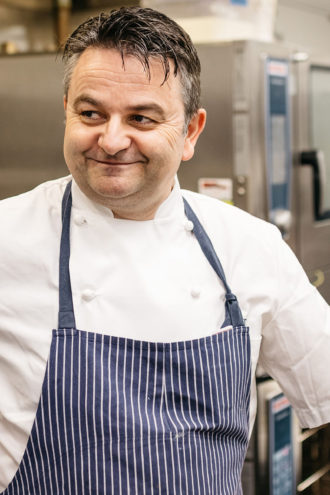 These were the times. Such were the paths. The two (now) Dallas-dwelling Frenchmen exchange names like a sort of rolodex of acquaintances.

And more coincidences. Both were head-hunted by Ducasse. Courseau when he was based in Paris and working as a consultant on openings, of which Ducasse’s Mix in New York was one. Davaillon, for his part, remembers the call summoning him from Japan, where he was working, to open Mix in Las Vegas, where he would earn the restaurant a Michelin star. Their French-American experience was needed.

This was Ducasse, to whom you do not say no, Davaillon adds, commenting on the incredible charisma and the intelligence of the chef. “He’s a visionary more than a chef,” Courseau says.

Courseau and Davaillon arrived in Dallas in 2009 and 2011, respectively. Davaillon helmed the Rosewood Mansion on Turtle Creek (where I shadowed him and wrote about the intensity of his focus and how he was shaping the scene). Courseau was consulting for Harwood, opening Mercat Bistro for the group and waiting to open his own Le Bilboquet (which took two years). They both had kids enrolled at the Dallas International School. But their paths didn’t cross. Not yet. Davaillon opened his brasserie Bullion, a gorgeous French restaurant with a Midas touch. Courseau added the casual Up on Knox and the neo-steakhouse Georgie by Curtis Stone to his small empire that circled Travis and Knox.

Both were looking to create something that was a whole. The restaurateur, Courseau, wanted to sink into a walkable neighborhood and to add his own stamp with various options. Davaillon, too, was creating something immersive at Bullion, his opulent brasserie, where he nevertheless included simple flavors from his childhood. But they were each doing this on their own side.

That changes with the two projects slated for the future.

What’s Next: Two Restaurants on the Horizon

In the vein of ambition and symbiosis, the duo has two projects slated for the future with French leanings—“tendences françaises,” Courseau says. And somewhere, somehow, they hope one or more of them will involve a boulangerie, a bakery that would turn out the good bread and viennoisserie about which they opine.

Both new unnamed projects center on the idea, as all of Courseau’s restaurants have, of an immersive experience with excellent product and attention to detail.

For the first, slated for 2022, they’re talking about France meets California, which they see as French with Mediterranean products. Olive oil rather than butter. “Lighter,” “not formal” fare in a space lithe with blonde wood. (Courseau’s wife is involved in all of the interior designs.) An all-day volley of menus means they could incorporate the boulangerie.

But what I saw from the inked menu draft (surely set to change in small or large ways) reads to me as entirely new, something unique and different for the city. It sounds very Provençale, very South of France, from places where it’s hot like in Texas.

Theirs looks to be a place where you can nibble ricotta-filled zucchini blossom fritters, salmon rillettes, and blue crab beignets. The ethereal chickpea panisse (chickpea custard fritters) that Davaillon served at Bullion will make a comeback, with a bagna cauda. Maybe focaccia with confit garlic and the herbes de Provence named after the region. Even the mussels are escabeche, not the Parisian bistro’s bivalves swimming in a heady white wine sauce, but little pickled things much closer to what you would nosh on in Spain.

To me, it reads entirely like cuisine Meridionale, as they would say in France, from the le Midi region that encompasses Aquitaine, Languedoc, and Provence and borders the Atlantic, Spain, the Mediterranean Sea, and Italy. (Being French, but Parisian, I wanted everything on the menu. It would be nice to have that here.)

Davaillon has a tomato tart on the draft menu, perhaps with a sweet onion compote and basil, and I couldn’t be more thrilled. There might be wood-grilled prawns; artichoke ravioli; and octopus with green olives “Riviera” style. Also a lusty rabbit terrine. You may find the ethereal soft scrambled egg (brouillade) served with blood sausage and croutons dusted with Espelette pepper. A delicate touch might come in the form of the little vol au vent pastries with escargot.

When they say light, they apparently mean halibut in a light saffron broth or poached skate wing with a mustard vinaigrette. Or foie gras-stuffed quail (the best foie gras in France hails from le Midi). Or duck breast (another Midi thing). Or of course lamb chops or a rib-eye.

They all belong here together. The foie gras, the rabbit, the Espelette pepper from a very particular town in the Pyrenees speak of a terroir.

And while this may sound befitting of a pastis, that licorice-y anise-based aperitif of the south of France, they may indeed spin it California. Most importantly, it’s Davaillon turning towards a cuisine we haven’t had spotlit with grace.

As for the second unnamed concept, slated for 2023, it skews quite differently. The duo will explore a French-Asian inspiration, with a whiff of fusion. This is a spacious box. But I do know that when Courseau worked for Vongerichten, he developed an appreciation for these marriages—things like foie gras sided by mango rather than the dark berries that are reflective of French terroir. As for Davaillon, his relationship with Teiichi Sakurai (of Tei-An and Ten Ramen) has led to a number of occasions to collaborate on menus that leaned French with Japanese insinuations. It’s all part of his wheelhouse of creative leanings, too.

Overall, it’s lovely to get excited for these projects. The knitting of the duo’s Franco-American symbiosis may lead to something ambitious and refined. A chef of Davaillon’s caliber bending his creative mind towards new places is always welcome. And meanwhile, you can wend your way to Up on Knox to see that he also just loves to make a good chilled soup or strawberry tart.