Editor’s note: In these times, it feels strange to run restaurant reviews. But the reviews—like this one for Georgie—in the April issue currently out on newsstands were filed more than a month ago in February. We were still in the distant past of a pre-March 16 restriction on in-room dining. So as you read on, please keep this in mind. Head here to see how Georgie pivoted after the order.

Last year, Stephan Courseau approached the Australian celebrity chef Curtis Stone about the restaurant he planned to open in a space made available to him by the landlord for Le Bilboquet, which he owns along with the nearby bistro Up on Knox. Conversations followed, as did visits to L.A., where Stone owns the Michelin-starred Maude and also Gwen, the latter known to spark epiphanies involving wild venison and pastured beef. With a meat-centered focus and butcher shop, it is the most direct inspiration for what would become Georgie.

From these conversations emerged a team, a trifecta centered on Stone (the Australian), Toby Archibald (the New Zealander executive chef who was most recently at Bullion, working under Bruno Davaillon), and Courseau (the Frenchman). Their trajectories overlap somewhere between L.A., New York, France, and Australia, their pedigrees in the realm of Jean-Georges Vongerichten and Daniel Boulud and the Michelin stars of New York-French and new American. Though we are in none of those places, the result is somewhere between all, with influence from each. But, as with any place with such prominent and pricey cuts of beef, Georgie might be mistaken for a steakhouse, which it is not.

Details in the dining room create a throwback effect: the retro curves of low-backed banquettes, opaque glass, lustrous burgundies and golds, and the luxurious texture of velvet in a muted shade like red-wine sorbet. The atmosphere in which you bask is one with silver trays and serving spoons, old-fashioned, like something your grandmother would use to serve peas and pearl onions. Courseau is a palpable presence in the dining room, and perhaps it is because of him that it seems to attract a more European-looking clientele of women in high heels and men in soft, gray sweaters. Later, you will select an Opinel or a Laguiole from a box of knives that Courseau collected gradually in the summer before the winter opening.

If that doesn’t do enough to distinguish Georgie’s from the traditional Dallas steakhouse, there are the side dishes. Instead of creamed spinach, there’s creamed endive, rich but bitter and tangy. And the foie gras tart—holding pastry cream that has been flavored enticingly with foie gras and given the ethereal crunch of toasted pepitas—is so silky and light you might find yourself compelled to note in a private “Eureka!” moment that they’ve managed to reinvent foie gras.

The mushroom velouté—sherry three ways (foam, reduction, gastrique), confit shiitakes, and toasted pine nuts—gives every impression of opulence, as does the beef tartare, which comes under a cloche, smoke infusing shallots, of which there are many. I was as enamored of halibut with circles of daikon and a pale cabbage leaf that has been salt-cured with dill and caraway and charred on the plancha as I was with an ingenious king crab givré. It’s a play on an orange givré (a dessert) that here you crack open to reveal king crab in a satsuma mandarin set on purple seaweed fronds—honeyed, brilliant, and saline. 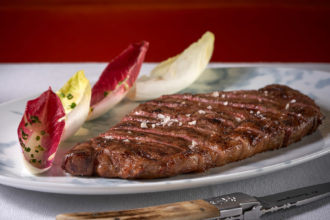 all tarted up: The Blackmore Wagyu NY strip, $145 for 10 ounces, is imported from Australia. Foie gras is reinvented as an ethereal tart, and halibut is updated with daikon and a charred cabbage leaf.
Kevin Marple 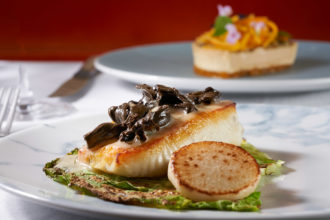 Kevin Marple
All Tarted Up: The Blackmore Wagyu NY strip, $145 for 10 ounces, is imported from Australia. Foie gras is reinvented as an ethereal tart, and halibut is updated with daikon and a charred cabbage leaf.

But at some point, you must ponder whether it actually is a steakhouse, rather than a French brasserie like Bullion, a subject of debate that the menu makes abundantly germane, with its boxed-in list of cuts at $145 and $390. Some come from far away, specifically Blackmore Australian Wagyu from a herd of full-blood Japanese Wagyu cattle exported to Australia before Japan curtailed export in 1997. (Stone is the sole U.S. importer for Blackmore, and orders for Georgie go through L.A.) My guests and I shared the 10-ounce portion, decadent like butter. The plate comes with slips of endive and a tarragon-flecked bearnaise.

The one grass-fed cut, a 6-ounce filet, is fabulous in its wintry intensity and exactly what you would expect from a place that is doing meat its own way. And medallions of venison with drifts of smoked parsnip purée carry the smoke element the team has been careful to import from Gwen, the open-fire fantasyland.

Investing in a French Rotisol rotisserie, and performing recipe-testing at Gwen using dozens of chickens and then settling on dry-salting and placing pedigree birds in the fridge overnight, yields nothing I would have foreseen or hoped for. We were aghast one night at how a whole bird ended up bald of seasoning in parts and pale beige. (If it’s not doing the crispy thing and not doing the juicy thing, what is it doing?) A second time, the half chicken’s skin crackled, but at what cost: it had been salted with such zeal that lips burned immediately.

And the potato situation with twice-fried roasties involved neither the pommes sautées or pommes Dauphine of a French menu nor the wedges of homier fries, but something sadly in the middle, puffy and mealy. Sherry and tarragon vinegar came in a little pitcher on the side, an unhelpful addition. The other potato on the menu, a crispy baked mash, of which I could have eaten a whole plate, was puffed in the oven, with a crisped top shell (like one side of a jacket potato) and a pale-yellow underlayer of mashed potato. It’s a starchy discourse, but details matter in a place that could warrant an essay by Montaigne on the philosophy of the steakhouse.

At the end, measure Georgie’s distance from what Dallasites might expect in a steakhouse by the banoffee pie, sadly no longer on the menu, with its sablé crust, ring of silkiest chocolate pudding, cajeta, glossy top rolled in cacao nibs,  and brûléed banana. Or the Underberg digestif or optionally nonalcoholic Seedlip cocktails you might sip with vegan panna cotta, a composition of purples and ghostly whites with lychees and a coconut sorbet that speaks of Archibald’s memories of toasting coconuts over an open fire in New Zealand.

The proof of genus or type is in the afterimage. I will remember the steak but also the charred cabbage on a portion of halibut. And as for the essay: do we need a reinvention of the steakhouse with French infusion? I think we do.

Looking for Longer Lashes? We’ve Got You Covered.