Elephant East, a 2,450-square-foot eatery designed by HDF and Duncan Design Group, opened today in the 19-city block Harwood District. It is the second concept to debut on La Rue Purdue, the European-inspired alleyway at the base of the office tower Harwood No. 10, and the tenth concept by Harwood Hospitality Group.

The design features hand-carved wood, tropical and bamboo greenery, and a vibrant color scheme of rich jewel tones such as red, purple, saffron, and gold.

Chef Thomas Griffin says he drew inspiration for the dishes through his years traveling across Asia, where he explored remarkable destinations including Bangkok, Indonesia, Malaysia, Philippines, Shanghai, Vietnam, and Taipei. 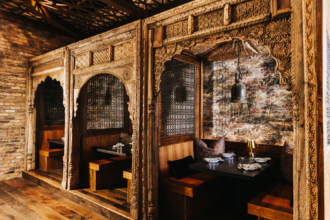 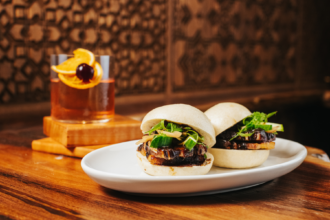 Elephant East
Kathy Tran
At Elephant East, Steamed baos are made in-house, which is unique to the area. Another unique first for the District, Elephant East’s menu incorporates authentic ingredients from Asian purveyors such as Chinese lotus paste and kaffir limes native to tropical Southeast Asia.

Having grown up peeling snap peas in his family’s restaurant, Chef Thomas spent five years learning from Philip Tang, a James Beard-nominated chef. With that mentorship, he mastered the art of Asian noodle and breadmaking along with wok cooking and dim sum production. His culinary philosophy is “authenticity meets locality.”

On the menu, guests can expect starters such as house-made Bao, which is made in-house. A unique first for the District, Elephant East’s menu incorporates authentic ingredients from Asian purveyors such as Chinese lotus paste and kaffir limes native to tropical Southeast Asia. 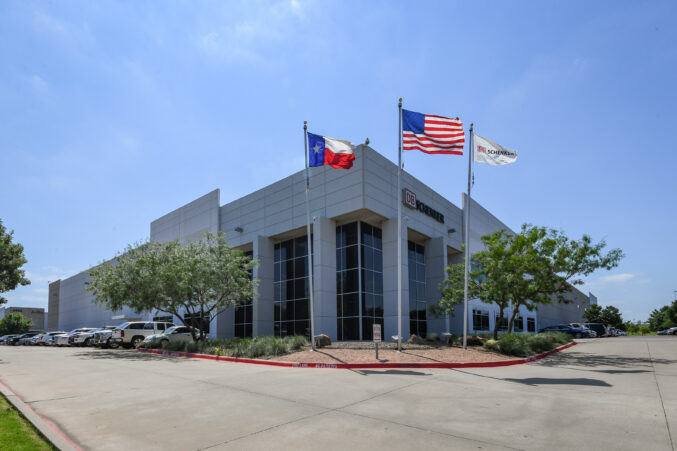 D/FW North Logistics Center, a two-building, 202,140 square foot Class A logistics center, located at 2400 & 2402 Esters Blvd in Grapevine, has sold. STAG Industrial purchased the property from an affiliate of Olympus Ventures for an undisclosed price. Randy Baird, Jonathan Bryan, Ryan Thornton, and Eliza Bachhuber with CBRE National Partners arranged the transaction on behalf of the seller.

Huffines Communities broke ground this week on a 1,530-acre master-planned development in Mesquite, its newest Signature Community™—Solterra. Construction plans include a 1,530-acre master-planned community with 3,900 new homes and 300 townhomes. The property has a long legacy – it was previously owned by the Lucas family, who turned the property into one of the most successful farms in the area dating back to 1929. Huffines Communities has taken care to protect the site’s history with 560 acres of open space, preserving pecan groves, orchards, and pastures that were a part of the original Lucas Farms. Phase 1 of Solterra will deliver 787 lots in the fourth quarter of 2022.

LL Roberts Group, a PEO services company, has signed an 8,200-square-foot office space in Lake Highlands Tower located at 9330 LBJ Freeway. The company is moving from the neighboring building located at 12225 Greenville Ave #300, and is adding to a brand new spec suite. JLL’s Lauren Halstedt and Ashley Curry represented the landlord, while Amber Roberts and Wills Bauer of Stream Realty represented the client.

Outsource has subleased its space at 3400 Carlisle.  The 2,907 square foot suite is at 3400 Carlisle Street in Uptown. Ben Crancer and Brendan Zrowka with Whitebox Real Estate represented Outsource, who specializes in the placement of low-voltage and electrical talent across the United States, in the disposition.

Midlothian Self Storage, a 94,385 square foot building at 200 E Ridgeway Dr in Midlothian, has sold. Brandon Karr with Marcus & Millichap’s Fort Worth office represented the buyer and seller. 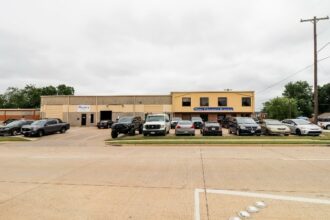 Jam + Toast, a local concept offering a full menu of breakfast and lunch favorites, has leased 2,500 square feet of space at Three Corners Plaza, a new shopping center located at the southwest corner of SH-380 and Coit Road, for a new location. Taylor Black with Weitzman handled negotiations as tenant representative for the restaurant. The Retail Connection represented the landlord.

Crumbl Cookies has leased 2,000 square feet at Heritage Towne Crossing in Euless. David Levinson and Thad Beckner with The Retail Connection represented the landlord and tenant.

Fred’s Texas Cafe plans for expansion into West Fort Worth with the opening of a NEW Fred’s Texas Cafe on 7101 Camp Bowie West in 2022. The restaurant’s flagship location at 915 Currie St. will close its doors on Dec. 31 and relocate to the new, bigger space come early spring.