Get Your Sugar Fix at Candytopia

The pop-up museum is the perfect sugar rush for kids.
By Natalie Gempel | May 8, 2019|4:18 pm
Advertisement

There has been no lack of Instagram-friendly immersive pop-ups in Dallas over the last year or so, but some of them have proven to be less than picture-perfect as an actual experience. Candytopia was a sweet surprise, though. It’s different than other local pop-ups like Rainbow Vomit, Sweet Tooth Hotel, and Psychedelic Robot— it’s aimed at kids more than it’s aimed at social media. It’s part candy factory, part art exhibit, part playground.

Candytopia launched in Santa Monica, California last year and has already traveled to New York City, San Francisco, Minneapolis, and Atlanta. The sugar filled pop-up has been in Dallas for about a month now, taking over a large space at The Hill shopping center (8021 Walnut Hill Ln) next door to Houndstooth Coffee and HQ Prime Beer Garden.

When you arrive at the candy museum, you’ll be lumped in a group and taken through the golden entrance gates by a tour guide. There are a dozen or so rooms, each with a different theme. You’ll want to spend about an hour going through the Willy Wonka-like maze, snapping photos against surreal backdrops and marveling at the versatility of gummy bears as a sculpture medium. Most of the installations, like the marshmallow mosh pit, are from previous iterations of Candytopia. There are some new treats at the Dallas location, though, like a giant Dallas Cowboys helmet, Big Tex, and a bull. 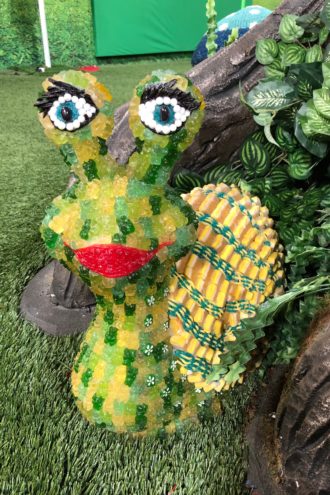 I wouldn’t call all this an art exhibit, but I also have a hard time believing that a replica of Rodin’s “The Thinker” made out of Jelly Beans is anything less than a masterpiece. Candytopia doesn’t take itself too seriously, and you don’t need to either. It’s all in good fun.

The price of admission is a little tougher to swallow, though. It’s $30 for adults, $23 for kids 4-12, and free for kids 3 and under. It’s a large installation, and it’s definitely impressive, but you could do a lot of other stuff with $30. Like buy 10 pounds of jelly beans on Amazon or go to three other museums.

That said, if I were a little kid, I’m pretty sure I would’ve gone bananas at the sight of all these sugary wonders. And if I were an Instagram Mom, I definitely would’ve gotten some killer content. As an adult without kiddos, it was a little too sweet for my taste.

Candytopia is open at The Hill seven days a week; you can schedule a tour here.

The Dallas Art Fair Announces Exhibitors For Its 2021 Return