Earlier this week, I took you on a bumpy trip of the Ross Avenue corridor, where a slew of major redevelopments have shot up and taken our sidewalks. Yesterday afternoon, on the way to an appointment at City Hall, I got curious where else this is happening. The problem: the city appears to have little control over how much public right of way is occupied by contractors doing these big-time tower re-dos. Walking around downtown, you’d think the city’s core is desperate for any sort of development—not undergoing the boom that we’re in.

“We don’t seem to have any system of controls that would guarantee any respectful use of the city’s right of way,” says Councilman Philip Kingston, who represents downtown, Uptown, and East Dallas. “It’s a function of the city’s historic fealty to developers. They get away with everything.”

To City Manager T.C. Broadnax: Dallas is again forgoing the safety of pedestrians and allowing these projects to overtake what little space residents have when they’re on two feet. This is happening in the densest parts of the city. A little scaffolding would go a long way. They’re even bleeding into driving lanes, sticking sad orange cones in areas that abut their fenced-off developments.

“They’ve managed to piss off not just the pedestrians but the drivers too,” Kingston says.

In my post from Wednesday, this was most evident on San Jacinto. But it’s elsewhere, too. Here’s one on Flora Street, the Arts District’s primary artery, which appears to be using a sidewalk to place equipment and, among other things, a Port-A-Potty: 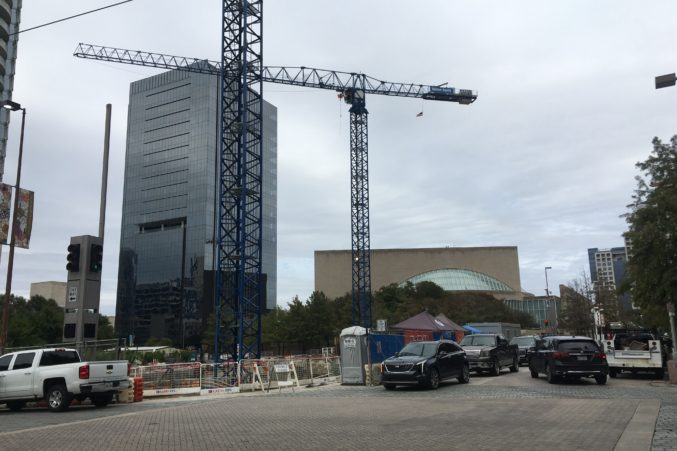 This sidewalk was made for pottying. (Photo by Matt Goodman)

Around the corner, the Trammell Crow Center’s work has swallowed the sidewalk on Harwood: 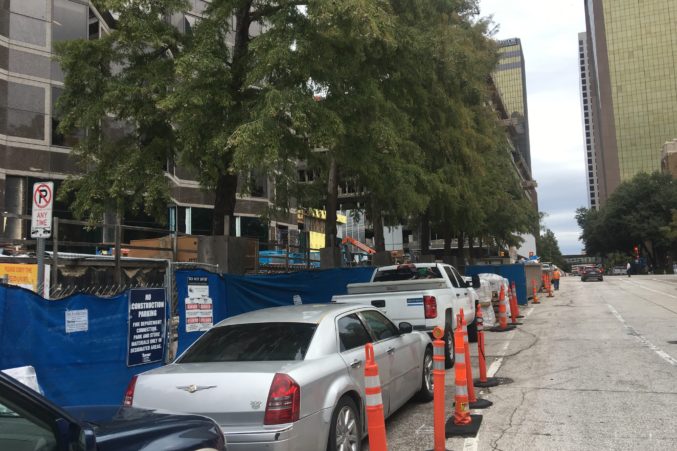 This one isn’t as bad, because there’s a giant sidewalk right across the street and Harwood isn’t too tough to navigate. But it is the principle. (Photo by Matt Goodman)

Further into downtown, things get rough. At the center of the always-congested Elm and Akard streets is this giant black wall, blocking the right of way for the seemingly forever-delayed Drever project: 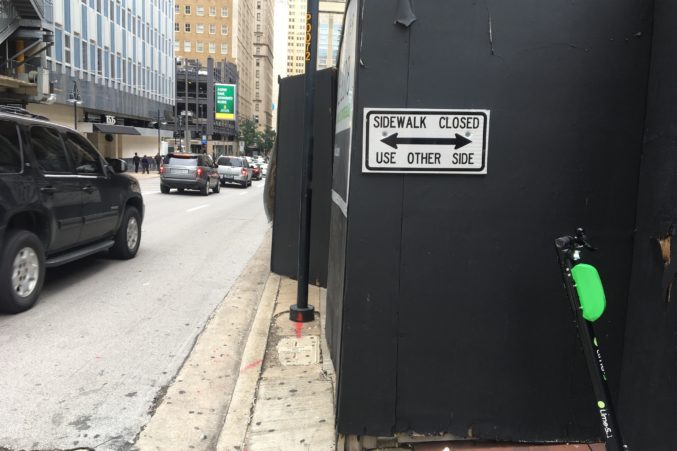 A blocked sidewalk at Elm and Akard streets. (Photo by Matt Goodman)

The AT&T takeover of Commerce Street has sacrificed the entire sidewalk. The construction does include a number of cut-through paths inside its bounds, but that’s no good for getting across Commerce. As evidenced by the following: 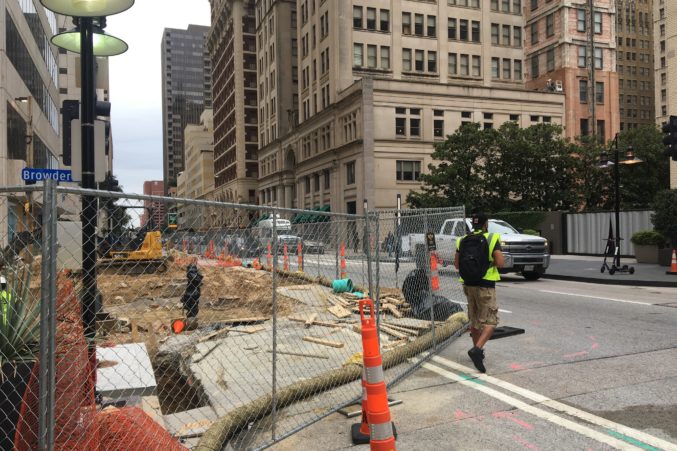 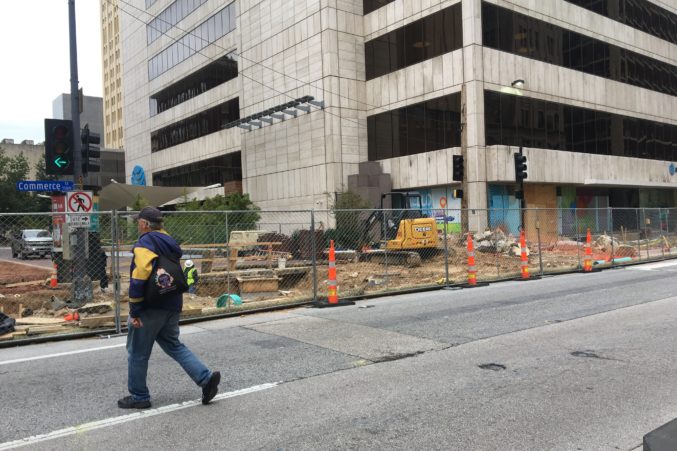 And here. (Photo by Matt Goodman)

We’ve done a lot of these posts this year. Fifteen of them, in fact, mostly concentrated around the city’s most successful neighborhoods. These are parts of town that are magnets for pedestrians: folks who are working, eating, drinking, jogging, biking, scooting, unicycling.

So, yes, the aforementioned Ross Avenue corridor, but there’s also machinery left on the sidewalk in the Medical District, barriers blocking a path near the Dallas Museum of Art, a mess of gravel and cones and a Port-A-Potty on downtown’s east side. Forthcoming parks—what should eventually be beacons of connectivity—stretch out past the sidewalk and into the street. The Statler sticks vintage cars in the middle of a walking path. The city, in a truly surreal move, surrounds a walk button in the Design District with cacti. Cars park where the sidewalk should be on Henderson Ave. The city allows the future Hall Arts Residences to take over a chunk of Flora. In the Cedars, a sidewalk is literally fenced off. And then, when the scaffolding actually does exist, the sidewalks are sometimes closed.

There are plenty more of these examples throughout the city. But when you group them all together, one can easily infer that Dallas, at its worst, detests civilians and, at its best, could not care less about inconveniencing them or putting them in dangerous situations. Construction monopolizes public right of way.

“We’re always getting calls, and we’re always trying to work with those people to make sure it’s safe and that people can get by,” said Councilman Adam Medrano, who represents parts of Oak Lawn, the Cedars, and Deep Ellum. “We get all kinds of calls. I think that’s something we need to work on.”

Kingston says he’s been calling for city staff to address this issue since well before Broadnax took over as city manager. He has requested city staff update him on a plan to tweak the right of way use guidelines. He says he hasn’t heard back. I’ve also left a message with Majed Al-Ghafry, the assistant city manager, about this topic. Medrano says it’s a difficult thing to address, partly because the issue doesn’t affect the other council districts the way it does his and Kingston’s.

“It’s us. It’s not the entire council. If it doesn’t affect them, they don’t care,” Medrano said. “It’s just not important (to them), so it’s kind of tough.”

It’s a reminder of the city’s need to start prioritizing residents, to think of them when a developer asks for control of the public space.

To Mr. Broadnax: Put the residents first—or you risk not having any in the future.