About 10 miles south of downtown Dallas, within eyesight of the Trinity River Audubon Center, a mountain of trash has been steadily growing since 1981. This is McCommas Bluff Landfill, where the city sends its garbage. Four years ago, they thought it would last another 50. Three years later, they guessed just 31. Given that it could take 15 years to secure a site and permitting for another landfill the size of McCommas—and cost about $1 billion—that life span starts to look worrisome. 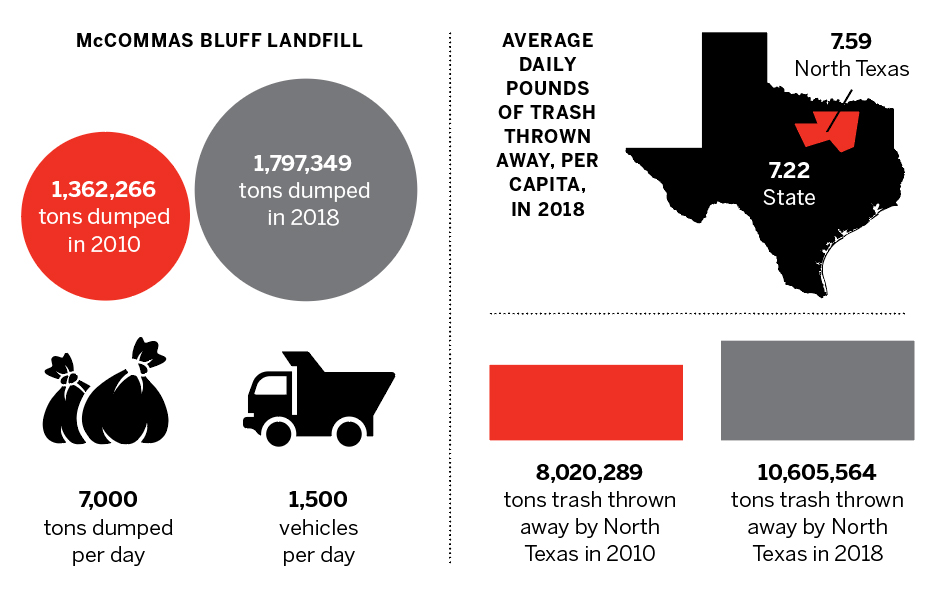 Barbara Coombs thinks she has at least part of the solution. Coombs owns a consulting firm called Environmental Benchmarking and recently ran for Dallas City Council (losing to Adam Medrano in District 2). She thinks the city of Dallas should be charging commercial clients more to dump their trash. Of all the landfills in our 16-county region, McCommas Bluff is the cheapest. She says that if Dallas raised its fee, the city’s sanitation department would make more money, waste minimization would be encouraged, and the landfill would last longer.

Robert Fadden runs McCommas Bluff. He’s been on the job for just seven months, but he has worked in the industry for 20 years. We asked him why McCommas doesn’t charge more. He said, “If we raise our prices, then others soon follow. Even if we were to raise our prices, our competitors would raise accordingly.”

So Dallas’ landfill, it turns out, is making it cheaper for everyone in North Texas to throw stuff away.