Outside Reverchon Ballpark on Friday afternoon, Tom Whelan, the lead attorney in a case that pits neighbors of the park against the city’s deal to privatize it, told reporters his side is open to an “avenue short of legal war.” That appears to be where this matter is headed.

The plaintiffs’ ask is not small. To avoid that battle, Whelan said, the city and developer would have to agree to take the stadium lease agreement for the 3,500-seat ballpark off the table and set parameters that would guide exploration of Reverchon’s future.

“If we are correct, and I think we are, that the process this far did not meet the applicable legal requirements, I don’t know that this can be fixed,” Whelan said.

The neighbors behind the lawsuit argue that the deal skirted Texas law with a public process that lacked transparency and neighborhood engagement. Namely, they home in on chapter 26 of the Texas Parks & Wildlife Code, arguing that the city failed to comply with rules on public notice and public hearings and that it didn’t look closely enough at project alternatives and harm to the area. “The City and the Council failed every statutory test for a legally valid Council vote to approve the Stadium Lease,” reads the complaint.

Proponents of privatizing the 100-year-old ballpark, of course, have argued that there was public input, pointing to a sparsely attended 2017 meeting about the renovations. (That meeting occurred prior to the city OK’ing a different development group in 2018, a deal that eventually fell apart because the group couldn’t raise enough money.) And they say the request for proposals (an RFP, in city parlance) that resulted in the bid by the Donnie Nelson-led development team required no further community engagement prior to Council approval. Those developers say they plan to hold public meetings after they draft designs for the ballpark, per the RFP.

Nelson’s Reverchon Park Sports and Entertainment LLC says it will spend up to $10 million on renovating the dilapidated stadium, which sits on about six acres of the 41 acre park. It will lease the property from the city for 20 years, and manage it, with two possibilities for 10-year extensions after that. The city will get something around $50,000 a year in concessions. The facelift also includes an all-abilities field tied to Clayton Kershaw’s charity. 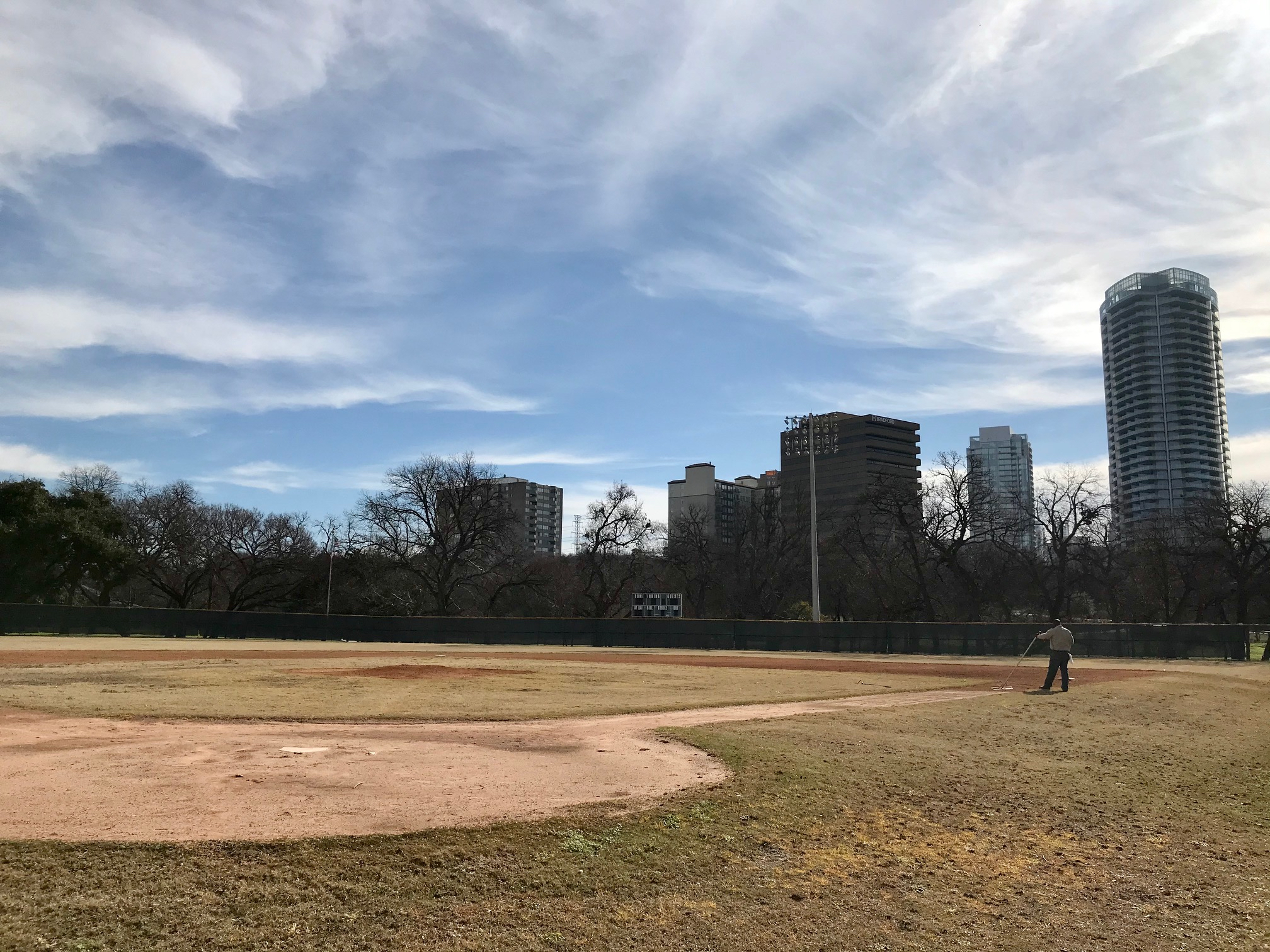 Some people who live in those towers are not happy.
Shawn Shinneman

Whelan filed the lawsuit on behalf of plaintiffs Charlotte and Robert Barner, a couple who lives in the neighborhood. The Barners complain of falling property values, noise, traffic, parking issues, and trash concerns. “Let’s have input from the neighbors who are literally right here behind us in these buildings,” said Charlotte Barner on Friday. “We live literally right here on this green space and we all use it, and we cherish it.”

The Barners were joined by a parade of some two dozen other residents of the area, the most noticeable of which was the politically connected Don Williams. Williams, who advocated for the privatization of Fair Park, is not in favor of the Reverchon deal, citing similar concerns of his neighbors: the process, the ill fit of a ball park that size in a space like Reverchon’s six acres, and what he calls poor economics. “Why is our city giving away this public land for private gain? It’s a bad economic deal for the city and the taxpayers of Dallas as well as for us as neighbors,” Williams said.

The deal itself, you’ll remember, appeared to be dead at the hands of a 7-7 December City Council vote. But by the time it had been brought back by Council member David Blewett’s appeal for another vote in January, three votes had flipped, and Council member Cara Mendelsohn was present this time around. The deal passed 11-4, with Adam Medrano, Omar Narvaez, Jaime Resendez, and Adam Bazaldua against.

Once the city is served the complaint, it will have 20 business days to respond, Whelan said Friday. Dallas’ interim City Attorney Chris Caso declined to comment for this story.