This version of Dallas’ City Council has not spent much time at each other’s throats. That changed Wednesday night, during hour two of a contentious talk about overhauling the aging and forgotten Reverchon Park.

A group of investors headlined by Mavs GM Donnie Nelson wanted to privatize Reverchon, a dilapidated but historic park with a century-old baseball field. They won’t get to. Council voted down the deal 7-7, with Council member Cara Mendelsohn absent. The deal’s supporters saw it as a no-duh, the chance to turn a crumbling city asset into a real attraction with no significant cost to taxpayers. It would even generate revenue through concessions sold at minor-league and North Dallas High School games. The park sits where Maple Avenue intersects Turtle Creek and the Katy Trail—prime real estate. Nelson’s Group was willing to put in as much as $10 million. The supporters now characterize it as a missed opportunity gone to hard heads.

“If you guys want to vote it down and then have the Reverchon stadium be a POS for the rest of eternity, we can do that,” said North Dallas Council member Lee Kleinman.

But city staff didn’t, or couldn’t, quell Council concerns about the process leading to Wednesday’s vote. West Dallas Council member Omar Narvaez said the deal stunk, scolding staff for their failure to present him the environmental or traffic studies he’d requested. He and South Dallas’ Adam Bazaldua took issue with the lack of community input. The Request For Proposals that the investor group responded to—staff informed the horseshoe Wednesday night—required only that they poll the community after receiving Council approval. Staff also said they’d held a public forum prior to the original proposal request was issued, and that the sparse attendance had been favorable to sprucing up the park. Of course at that point, there was no privatization deal on the table.

“When we as council members try to start changing up an RFP during the process, from the horseshoe?” said Gates. “How unprofessional.”

“Unprofessional is a very strong word to use here at the horseshoe,” Bazaldua shot back.

This is the second time that the City Council has voted on a plan to revitalize the park. The previous RFP was rather open and shut. It took Council about a minute and a half to approve it 18 months ago, as the DMN’s Robert Wilonsky mentions in his Reverchon roundup. But the investors never raised the money they said they would, and the plan died.

The Park Board cleared this deal by a 13-2 vote but did so in the current board’s first-ever meeting. Narvaez questioned whether those voting had the time they needed to ask questions and gather information.

Park Board Member Jesse Moreno, whose district covers the ball field, has taken issue with the process. He questioned the way the nonprofit portion of it—an “all-abilities” field tied to the charity of Los Angeles Dodgers pitcher and Dallas native Clayton Kershaw and his wife, Ellen—was tacked onto the RFP after the fact and then loudly trumpeted to the Park Board. He asked for the two to be separated, but was denied.

Others around the horseshoe viewed the fundamentals of this deal as more or less the same. Broadnax couldn’t wrap his head around “this notion of feeling rushed because of a two-year timeline.” Bazaldua eventually withdrew his motion to delay the vote.

Most telling of the way the night flew off the rails was Adam Medrano’s change of heart. More than an hour in, he was asked where he stood. He’d made the original motion to approve. His district encompasses Reverchon. But he was now against it. Because council members can’t speak in opposition of their own motions, that meant his motion disappeared, and it required Kleinman to put it back on the table.

Shortly before 9 p.m., Council called to question and voted. They needed a majority to pass it. 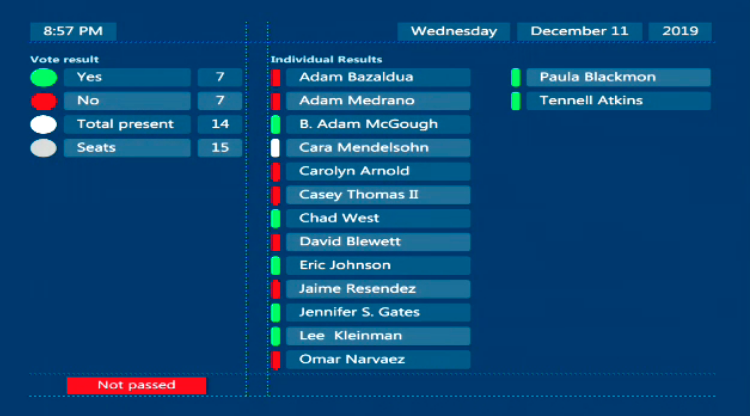 For his part, Bazaldua added some additional thoughts about why he voted it down last night on Twitter:

This is one of those times twitter doesn’t give near enough characters… #reverchonpark vote last night made a bunch of people randomly text/call/message methos afternoon…well not until @RobertWilonsky gave his opinion on the matter.
Here is why I voted NO. pic.twitter.com/SMW89vDdHx