Sixty years ago, Gordon McLendon decided to plant a movie studio between the coasts.
By Connell R. Miller | September 13, 2019|2:30 pm

Subscribe
Advertisement
Gordon McLendon moved to Dallas in 1947 and started a radio station the same year—KLIF, the Mighty 1190, broadcasting out of Oak Cliff. In the early 1950s, he turned KLIF into one of the first Top 40 stations in the country and developed a reputation as one of the more creative programmers radio had ever seen. But that wasn’t enough for McLendon. Along with his father, Barton, he began branching out into other areas. They bought movie houses and drive-ins and land to build more of both. Eventually, they owned more than 40 theaters.

That wasn’t enough for McLendon, either. Noting the occasional foray of Hollywood into Texas—Giant, for example, had been filmed near Marfa—and with his now-vested interest in the medium, he decided it was time to establish the first movie studio between New York and California. His new studio’s debut project would actually be a pair of films: The Giant Gila Monster and The Killer Shrews.

It was in 1958—20 years before camera crews rolled through the gates of oilman Cloyce Box’s ranch to begin filming the exterior scenes for Dallas—and excitement was racing through the city that not one but two movies were going to be made here. And by an honest-to-God local studio, no less!

I was attending St. Mark’s at the time. Since the parents of several of my classmates were friends with the McLendons, campus hummed with chatter about the films. The main topic: that some of us would likely be excused from class to act as extras, particularly when the big teen dance scene in The Giant Gila Monster was filmed. I, for sure, planned to be first in the line of volunteers. 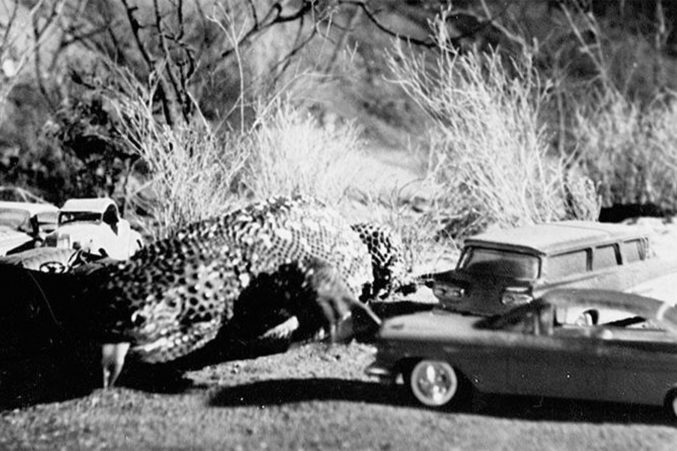 Around this time, my cousin Buddy Boren and I were driving south on Central Expressway, toward downtown, when a green ’32 Ford Model B Roadster sped past us in the opposite lane. We looked at each other and simultaneously yelled: “That was Doc Mulkey’s car!” On the first Sunday of each month, Buddy and I would hang out at Caddo Mills, the old WWII military training base-turned-drag strip. A common sight there was John Mulkey, a Waxahachie physician, racing his roadster. So we knew that car well. And knowing that the car’s very hot engine—a 302 Chevy V8—was not suitable for driving on the street, well, we had to check this out.

After some digging, we discovered that Doc’s car (now with a stock engine in place) had been leased by McLendon for Don Sullivan—the young actor cast as Chase Winstead, the lead in The Giant Gila Monster—to drive in the film. As we heard more about the script, it seemed to be more of a teen film, with rock and roll and hot rods involved. Buddy was a student at Highland Park but had heard the same rumor of a casting call there for teens. Man, we couldn’t wait to get on the set.

The “set” was actually McLendon’s 200-acre ranch, Cielo, located on the west side of Lake Dallas’ north end, near Lewisville. It was perfect for most of the scenes shot in both movies, and it eliminated some of the usual expenses, such as obtaining time-consuming permits and insurance against a property owner’s damage. The biggest concern at the time was logistical: getting the crew, principal actors and extras, and all the necessary equipment up to the site. I was told years later by a crew member that McLendon worked hard to keep everything running smoothly and everyone happy. But though he was incredibly smart and intuitive, the neophyte producer was having to learn on the go how to cope with the inevitable complications that would arise with the production of a movie—and here there were two being filmed.

Decisions on who would direct them involved a bit of a quid pro quo. Ray Kellogg, who actually wrote the original story for The Giant Gila Monster (Jay Simms wrote the screenplay), had worked for 20th Century Fox as a special effects expert and made a deal with McLendon that he would be allowed to direct both movies in return for providing those particular skills during filming.

“Excitement was racing through the city that not one but two movies were going to be made here. And by an honest-to-God local studio, no less!

Ken Curtis—a former singer in Tommy Dorsey’s big-band-era orchestra but better known as Festus Haggen on the TV Western Gunsmoke—came aboard as a producer, sharing that title with McLendon. (He also had an acting part in The Killer Shrews.) To ensure that the music in The Giant Gila Monster passed the listening standards of the teens slated as the movie’s target audience, Curtis let Don Sullivan, the aforementioned young lead, select the tunes for the soundtrack.

When the films were edited and in the can, the duo hit the silver screen. They were not star-studded, Texas-size spectacles like Giant. No, these were both low-budget, horror-genre offerings. Variety reported that The Giant Gila Monster was originally budgeted at $300,000 but came in “under the wire” at $138,000 (about $1.2 million in today’s dollars); The Killer Shrews cost an even more modest $123,000.

The casts included McLendon and his wife, Gay, and daughter, Jan; friends like Baruch Lumet (father of film director Sidney Lumet), director of the Dallas Institute of Performing Arts who had coached students Jayne Mansfield and Tobe Hooper; Ken Knox, one of the hot disc jockeys at KLIF; and Angus Wynne III, a fellow student at St. Mark’s whose dad built Six Flags.

There were a number of real actors brought in from the West Coast for the movies, including Shug Fisher, Fred Graham, James Best (Sheriff Rosco P. Coltrane in the ’80s CBS series The Dukes of Hazzard), Ingrid Goude, and more. Lisa Simone, the 1957 Miss Universe contestant from France, played Sullivan’s girlfriend in The Giant Gila Monster. The voracious shrews were actually costumed coonhounds. A Mexican beaded lizard portrayed the 70-foot Gila monster that was cutting a swath of death and destruction.

They were considered regional films, but unlike many in that category, they did receive national and foreign distribution and had showings in a small number of movie theaters across the country and an occasional appearance among late-night horror TV offerings. Years later, when both were eventually released on VHS, they hit the mark with a public who found the campy movies to be perfect for group watching on a Saturday night. They both ended up on an episode of Mystery Science Theater 3000. Sales soared and have continued to this day, with copies now available on DVD as well as a colorized version of The Killer Shrews.

In June 1959, we left my beloved Dallas for Oklahoma. There, sometime later, I saw an ad for The Giant Gila Monster, which was starting a short run at the Roxy. My younger brother Alex and I were there for the first showing that Friday evening. The place was packed. I couldn’t help but constantly point at the screen and tell my sibling in a not-too-quiet voice, “Look, there’s our cousin Buddy,” and, “Hey, that’s Doc Mulkey’s car,” or, “There’s Jan McLendon riding in that other guy’s roadster.”

Unfortunately, I couldn’t point at myself on the screen. My expected role as an extra never came to pass. St. Mark’s strict headmaster determined that, since my grades had slipped somewhat at that particular point in time, I would be denied the chance to be in the big finale scene, dancing with a cute girl when the giant Gila monster crashed the party to wreak havoc on us all. A real bummer for this teenager, I assure you.

Get a front row seat to the best shows, arts, and things to do across North Texas. Never miss a beat.
Dallas Gordon McLendon KLIF Mighty 1190 Oak Cliff The Giant Gila Monster The Killer Shrews