It’s always refreshing when an artist doesn’t take their work too seriously. At the Nasher Sculpture Center on Friday afternoon, 85-year-old American-born, Paris-based artist Sheila Hicks introduced her new exhibition by breaking formalities. Standing in the Lower Level Gallery surrounded by her work, she tugged on one chunky cascade of textiles hanging from the ceiling.

“If you avoid touching it, I’ll be disappointed,” she said to the room of reporters (needless to say, this is not normally allowed).

The artist works primarily in fiber, weaving vibrant and dynamic sculptures and wall hangings that refer to traditional artisan textile. Sheila Hicks: Seize, Weave Space, on view May 11 through August 18, is composed of new and recent work arranged in the lower gallery and garden. From large installations to small interventions, it’s all temptingly tactile. 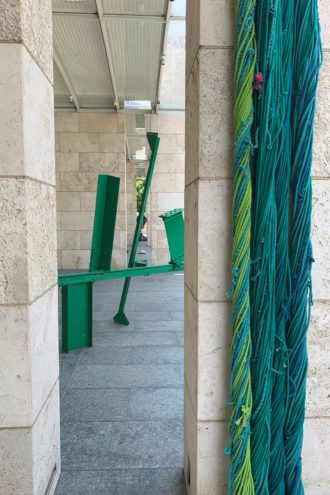 As she gave the tour, Hicks interacted with her art as much as she did with the audience. She took a canvas off the wall to show everyone the handwritten title on the back. Then she took one piece of “Comets and Confidentiality,” an assortment of fiber rounds on the wall, and handed it off.

“Pass it around,” she said. “I need to have your intimate response to my intimate offering.”

This artwork is not too precious. There’s something big and messy about it, with its stray threads and scrappy fabric. (Side note: the leather bits mixed into “Comets and Confidentiality” are leftovers from the Hermés workshop in Paris, not far from Hicks’ studio.) It has the warmth of something homemade–imperfect but rich with emotion. 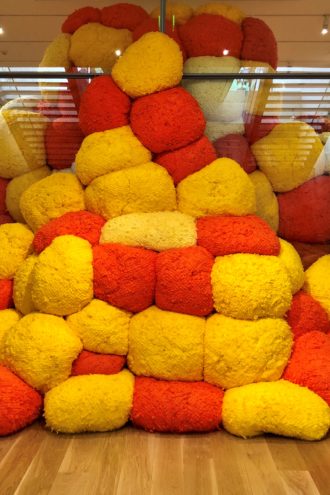 Beneath the stairs adjacent to the lower gallery, one large wall textile has returned to Dallas decades after its debut here. The latticework of woven panels was commissioned for One Main Place in the ‘80s, and was later returned to the artist. She decided last night to donate it to the Dallas Museum of Art, so it’s here to stay now. (A bit more about that here.)

The piece is one example of how Hicks’ art is unique in its adaptability. It’s arranged in a slightly different pattern than it was in its last home, like many of her other supple works. It’s also stapled to the wall, which the artist is quick to point out.

“Does that bother you?” she asks. “It’s not that I disrespect my work, but I try not to be overprotective.”

In the garden, Hicks has created some subtle installations to ponder amidst the Nasher’s permanent collection. Using marine textiles (water resistant and non-dyed), she adorned the building’s columns with bright ropes, and circled tree trunks with strips of fabric that almost resemble utility cords. Hicks describes the tree interventions as “quiet,” as if she didn’t want to disturb the gargantuan Richard Serra and Magdalena Abakanowicz sculptures nearby.

Hicks is thoughtful about the way that her work interacts with its environment, and the austere surrounds of the Nasher are a nice complement to art that’s anything but rigid.

Sheila Hicks: Seize, Weave Space opens to the public on Saturday, May 11. In conjunction with that opening, the museum will also unveil Pairings: Sculpture in the Nasher & Rachofsky Collections.