Tour Jack Mason’s Deep Ellum headquarters and you’re either going to want to grab your all-natural boar bristle toothbrush and call it home, or you’re going to hate the brand for so being the physical manifestation of the Americana music movement. You’ll get what I mean. There’s exposed brick, original windows, cement floors, a mix of vintage and custom furniture, staffers’ dogs milling around the open concept workspace, and, naturally, various forms of taxidermy mounted throughout. Heck, there’s even a framed American flag. It was the first piece of décor founders Michael Reese and Craig Carter bought for their offices. 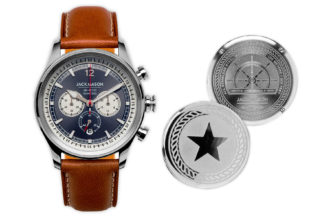 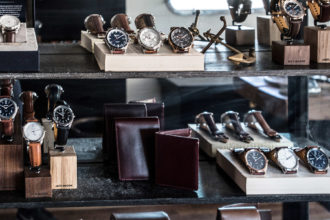 Elizabeth Lavin
Like Clockwork: Every watch has a second hand tipped with red, white, and blue and a lone star on the crown. The back is etched with a nod to its type; the Nautical Chronograph ($275) has a ship’s wheel.

And as if that isn’t enough, there’s also the 1971 Airstream. When launching the accessories brand in 2014, Reese and Carter, seasoned retail execs who met at Fossil, found the tarnished hunk of metal in Tulsa and had it refurbished into a mobile showroom complete with reclaimed flooring from a local school gymnasium and antiques nailed down to display their watches and leather goods. The guys took the Airstream on the road for six weeks straight to drum up business and have kept it in use ever since. In fact, this year the Airstream traveled more than 20,000 miles to various events, crossing the country from New York to L.A.

The vehicle, metaphorically and literally, encapsulates the Jack Mason style: classic, sturdy, American—an ethos reflected in the brand’s merch, now sold at major retailers such as Nordstrom, plus 130 specialty stores across the U.S., including Oak Cliff’s DLM Supply. This summer, they launched a new, even more affordable line of watches called Canton and Hall, named after their headquarters cross streets (and yes, they had that name before the new music venue).

If you’re interested in seeing their offices for yourself, keep tabs on the Jack Mason social media. Every few months, the company clears out their desks to make way for a come-one-come-all block party. Their last event in November included shaves and trims by Brass Tacks, free drinks from local brewers and distillers, chainstitching services courtesy of Fort Worth’s W Durable Goods, plus Stetson, Lucchese, Opal Milk, and 1791 Supply Co. on site selling their wares.

“A lot of companies that are similar to us, they’re either in New York or they’re in L.A.,” says Reese, “And we’re very proud to say, ‘No, we do this in Dallas, Texas.’”

Now, click through for a tour—and don’t forget your botanically derived toothpaste.