Having grown up near the pristine waters of northern Lake Michigan, I’m an admitted beach snob. And, having been to Galveston, my expectations for Port Aransas were on the low side. So, it was a bit of a shock when I first took in the resort town’s gorgeous ocean shoreline.

Situated on the 18-mile-long Mustang Island, Port A surprised in other ways, too, with a host of recreational opportunities that ranged from building sandcastles and cruising around in beach buggies to watching for birds (and the occasional alligator) at Leonabelle Turnbull Birding Center.

But the best way to experience this vacation spot—a seven-hour drive from Dallas, factoring in obligatory stops at Buc-ee’s and for kolaches in West—is on the water. There’s parasailing and dolphin tours and sunset cruises, but the biggest draw, no surprise, is the fishing. 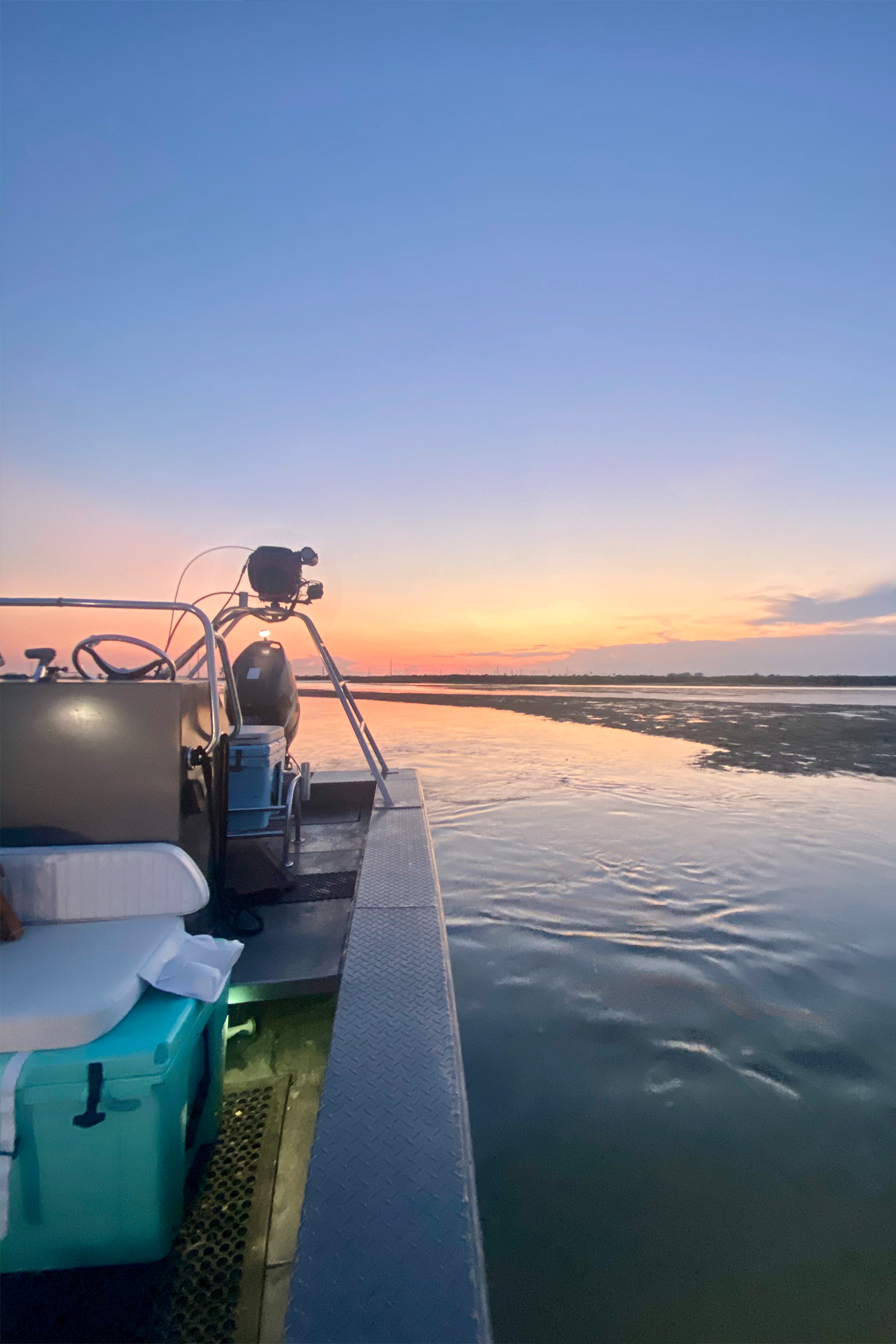 For novice anglers, Captain Jackie with Fish Tales starts at the beginning, teaching how to cast lines and catch baitfish near the jetties before moving deeper into Corpus Christi Bay. A host of charters will take you into the Gulf of Mexico to fish for Red Snapper around the reefs or farther offshore for Mahi-Mahi, Marlins, Tunas, and Amberjacks.

For an unforgettable experience, go gigging for flounder under the cover of night. Although he has been doing it for years, our exceptional guide, Tray Clark, still has unbridled enthusiasm for sharing his love of “floundering” with others.

It involves quietly coasting over very shallow parts of the bay, with the underwater world below illuminated by lights that shine down from the boat. Then, once you spot a flounder camouflaging itself by lying flat on the sand, you spear it with your gig. 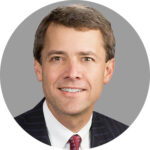 Jackson Walker tax attorney Willie Hornberger grew up near Laredo but spent summers in Port Aransas, where his family had a vacation home going back to the 1930s. He has continued the tradition with his own children, instilling in them a love for the outdoors. For dining, he recommends La Playa Mexican Grille and Richard’s Fish (a sautéed filet topped with blue crab, avocado, almonds, and bacon) at Jay’s Seafood and Spaghetti Works. To really get away from it all, head south to Padre Island National Seashore. “It’s a 70-mile-long secluded beach,” Hornberger says. “It’s a place you can go to forget about any challenges at work or in life.”

After my travel mates and I speared about a dozen flounder (and sheepshead and a couple of black drum), we cruised to a deeper spot of the bay and sat still under the moon and stars while dolphins swam and jumped all around us. It was pure magic.

For getting around, visit Scott Tanzer at Port A Beach Buggies, who will set you up with one of his tricked-out golf carts. They’re allowed on city streets—just don’t drive them on the dunes or south of Avenue G on Highway 361. 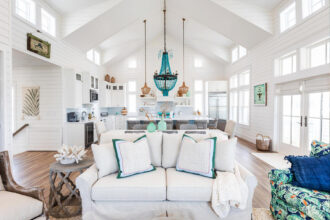 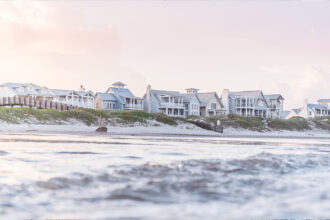 Nothing beats Cinnamon Shore for accommodations, an oceanside community that evokes Cape Cod with an island influence. Choose from condos, townhomes, cottages, or luxurious six-bedroom homes. Along with a coffee shop, market, and liquor store, there are enough on-site activities (three pools, surf lessons, yoga or bonfires on the beach) and food options (including the coastal cuisine at Lisabella’s Bistro, known for its Mermaid Soup), you’ll never need to leave.

But then you’d miss out on the impressive dining opportunities in town. Visit Roosevelt’s at the Tarpon Inn and try the jumbo lump crab cakes, quail tails, or shrimp and tenderloin tower, and the restaurant’s signature Key Lime Pie for dessert. 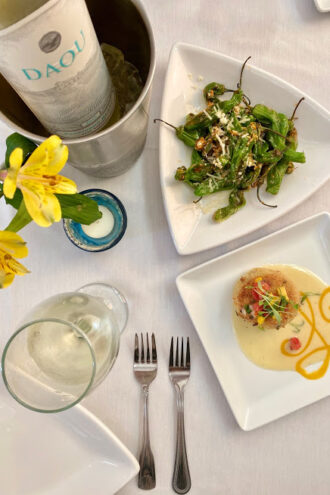 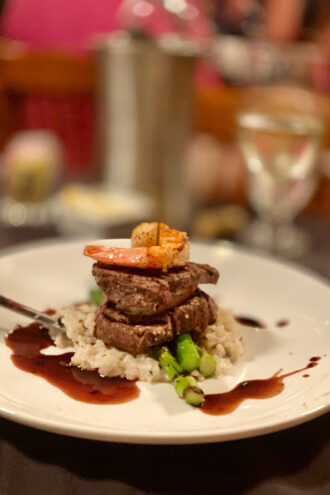 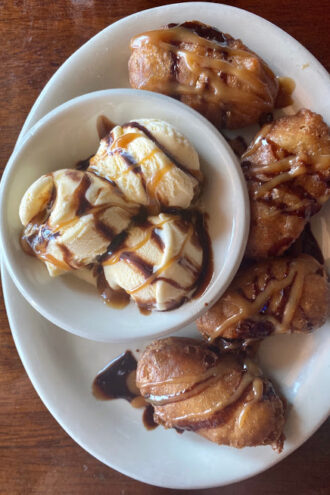 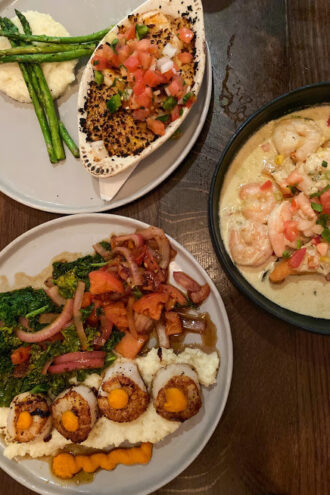 From the top left: crab cake and shishito peppers at Lisabellas, shrimp and tenderloin tower at Roosevelt's, fried Nutter Butter cookies with ice cream at Stingrays Taphouse & Grill, and an array of entrees at Tortuga’s Saltwater Grill

At Tortuga’s Saltwater Grill, standouts include the jumbo gulf shrimp cocktail, Poke Nachos (incredible!), Shrimp and Grits, or seared scallops with a carrot-ginger coulis. If you want a break from seafood, try the Black-and-Bleu filet.

Don’t leave the more casual Stingrays Taphouse & Grill without trying the divine fried Nutter Butter cookies with ice cream. And at Castaways, the Alotta Colada cocktail will put an exclamation point on your vacation vibe.