Until the last U.S. Census, there was still a slice of Dallas County land deemed rural. County Judge Clay Jenkins is hoping that running a frontage road through it will boost southern Dallas’ economy and allow for the beginnings of a new, slightly denser chapter.

“It’s not that people don’t have jobs,” says Jenkins, “it’s that they’re not good jobs.”

The process dates back more than six decades, and we’re finally creeping toward a start date for the southeast portion of Loop 9. That’s the highway that was long ago planned for the outer ring of Dallas. Jenkins has made reviving the project a priority since winning his seat in 2010. The road will connect Interstate 35E and Interstate 45 in southern Dallas. And while Texas Department of Transportation officials say the loop has been reimagined as merely an east-west corridor, his long-term vision includes building up a true loop that can slingshot congestion-causing freight traffic around the city and spit it out somewhere above Collin County, possibly as high as Grayson County.

TxDOT officials say the area has long asked for better connectivity between I-35E and I-45 and for a highway to take freight congestion off Belt Line and other rural roads. “We heard from the locals that it was important to build that connection between 35 and 45 first,” says TxDOT spokesman Tony Hartzel. “That would give truckers another option, not having to go all the way up to I-20 and back down to 45, for example, or vice versa.”

The project straddles Dallas and Ellis counties and touches Lancaster and Red Oak. The two highways sit about nine miles apart and about four or five miles south of east-west running Interstate 20.

Look at a map and you’ll see the stacked highways cutting across the northern part of the city—Northwest Highway, Interstate 635, and the President George Bush Turnpike. Northwest Highway, of course, loops south, as does I-20, which cuts through Hutchins and Duncanville. But south of that, there’s nothing. That’s the void Loop 9 Southeast seeks to fill.

Beyond the congestion and connectivity advantages, Jenkins views the stretch of Loop 9 as economic fuel for an area that needs it. He sees potential to turn the stretch into rich grounds for manufacturing and logistics companies that pay wages between $11 and $17 an hour. In Jenkins’ eyes, Loop 9 opens up 50,000 acres of undeveloped land. 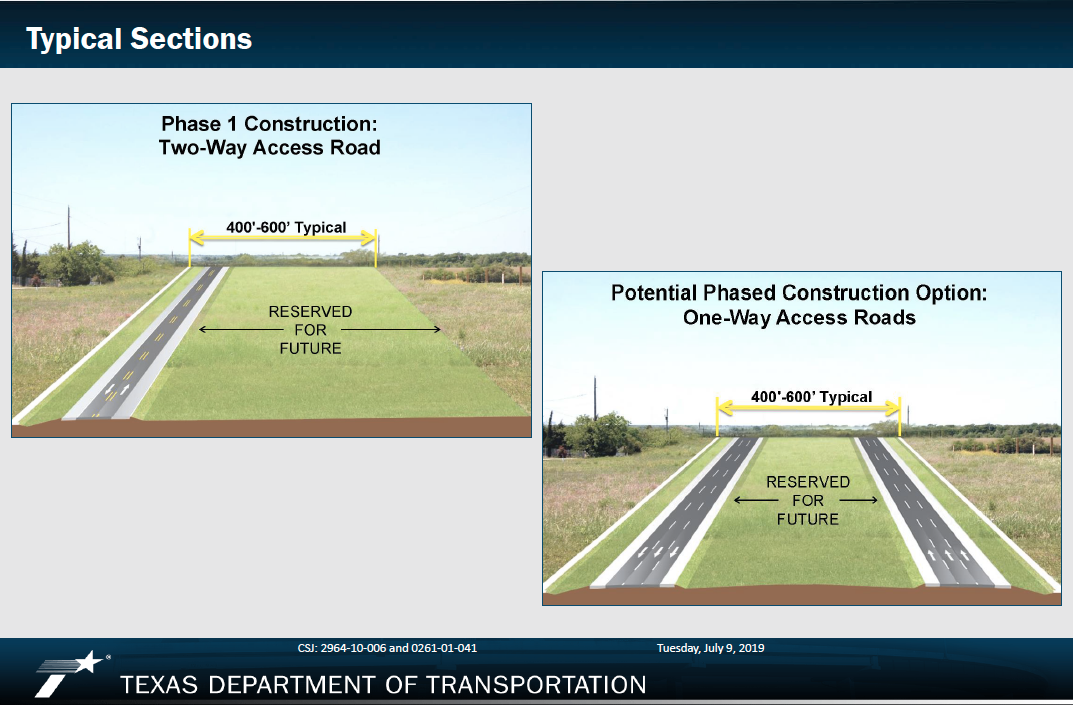 Loop 9 will go up in phases, starting with a two-lane, two-way highway.

The stretch from I-35E to I-45, known as Segment B and expected to cost about $450 million, received full clearance in September 2017. The county is currently procuring the right of way—Jenkins says that process is almost complete—and construction is set to start in 2021. It’s estimated that phase one construction will take about three years.

The first phase is to build a two-lane, two-way access road. As it’s set, phase two would involve building a second two-lane access road and then making each of the roads one-way. During phase three, contractors would tack on an extra lane to each road. Finally, there’s room for a multi-lane highway to go in between the access roads as needs dictate. At that point, we’re talking decades into the future.

And that’s just one stretch. TxDOT held public meetings this week on Segment A of the project, which would connect the loop west from I-35E to US 67. The route passes through Cedar Hill, Glenn Heights, Midlothian, Ovilla, and Red Oak. If all goes as planned, TxDOT will bring an environmental impact statement to the public next summer. It could receive clearance in winter 2022.

Instead, Jenkins wants to work with other leaders in the region to take the traffic burden off highways that currently run through Dallas County municipalities.

“Ultimately Loop 9 becomes part of what Collin County former Judge Keith Self and now the current judge Chris Hill and I are calling the outer loop, where you’ll be able to bypass in your truck—your 18-wheeler—Dallas entirely,” he says.