You can’t help but notice the flamingo-pink sign from the street—Paradiso in neon cursive—as though it already exists in your Instagram stories. But you might be drawn to this garden of earthly delights regardless. It is part of a compound arranged around a courtyard and a gurgling tile fountain, a trio of establishments that marks the Exxir Group’s first foray into hospitality. Attraction is the point.

The real estate development firm—founded by Farrokh Nazerian and with sister and brother Natasha and Michael Nazerian serving as director of hospitality and CEO, respectively—already had a heavy presence in this neighborhood down Bishop Avenue, extending the Bishop Arts District’s walkable radius. Their guiding hand was responsible for the tenants in the surrounding blocks, the boutiques and anchoring restaurants like Macellaio and Tribal All Day Cafe. Then, this summer, they finally opened their own restaurants. In addition to Tejas, a taco-and-burger joint down the street, the full-service complex they’ve put together contains an ostentatiously moody bar called Botanist; Good Companions, a cottage-style coffee shop; and the glass-walled Paradiso. The latter was envisioned as a lushly furnished, neighborly spot with house-cured and house-made underpinnings, with skin-contact wine and light bites in a jaw-dropping space.

And it is. Inside, guests recline in overstuffed chairs under mercury-glass mirrors and between marble-topped tables and potted palms—picturesque set pieces in a vast space full of pretty people who have seemingly walked straight in out of an Anthropologie catalog. A wood-fired oven in the corner sends out Neapolitan-style pizzas that are not too large, with their crusts attractively blackened around the rim. 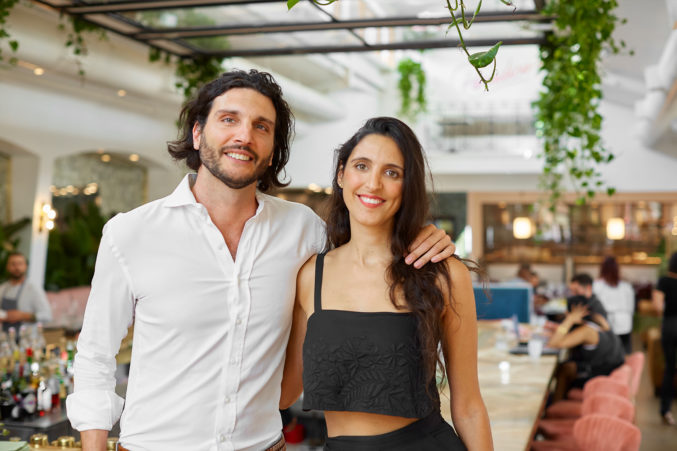 Paradiso turns out to be the kind of thing you’d see in any chic, bohemian neighborhood. As such, the glass-ringed room hovers in the uncanny valley between drop-dead alluring and drag and drop, copy and paste. Giving you, for now, everything but authenticity. They want you to feel that you’re here. (And they want you to walk here.) But the truth is you could be anywhere. And diners come from everywhere. The street in front will fill with Lyft cars.

Which is not to say that the food is not at times very good. The Nazerians hired Jeremy Hargrove, who developed a menu that is under the leadership of executive chef Nick Hurry, with whom Hargrove previously worked at Proof & Pantry. When it’s working, the fare stays simple, genuine, a mix of Mediterranean and Middle Eastern.

I have memories of a rosy glow and a cold smoked-beet salad, tumbled with pine nuts and slivered dried apricots and given a bewitching smear of green cardamom-​enhanced labneh. (Somewhere under there, contributing to the flavors, was a brown butter-lime vinaigrette.) The bar at the center of the room can be a wonderful place for oven-warm pita and a glass of wine or the Paradiso Soda. The latter is laced with passion fruit and is the standout of a small, smart cocktail menu. 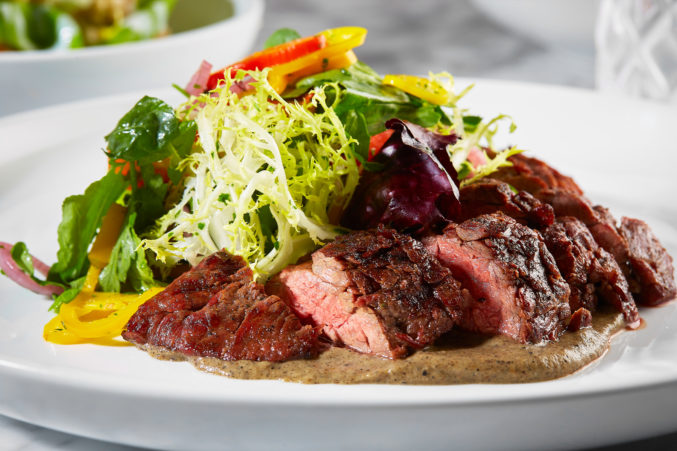 Pizzas—the dough chewy and proofed long enough to give them a distinctive flavor—are stellar, if the toppings cooperate. A veggie option held what the menu dubbed confit potatoes. I suppose in some universe they might be considered confit, though some were firm and others mushy. The real interest came from pickled peppers, like a tangy house-made giardiniera. Another offered anchovies and an herby salsa verde, like a pistou, spooned over the crust.

Grilled proteins, meant for sharing, are simple, their strengths and flaws on full display. The branzino arrives head on, with eyeballs left for you to grapple with. This is, after all, 2019. The flesh is tender and perfectly cooked, with notes from the wood fire. A chimichurri on top adds a garlicky punch, and chickpeas lolling in tomato sauce are everything that chickpeas in the rustic Italian tradition should be.

A side of brown butter basmati seems to have decided it’s more about the slivered almonds; the stray shards of peppercorn that give it an enchanting, exotic aroma; and its accent of rosewater and dukkah. The rice itself is fine, though dry.

Cacio e pepe, which should be the epitome of restraint, resists almost all resemblance to cacio e pepe with its rogue lemon zest and parsley; a finishing drizzle of olive oil breaks up the emulsifying of the sauce that is the point of this (usually) three-ingredient bliss. And gemelli one night are somehow both hard and gummy. On the other hand, fresh linguine came lavished with a braised lamb ragù studded with porcini mushrooms whose umami intensity made me think at first they were frizzled chicken skin. The lamb and tarragon added their own rich flavors to a sauce you could curl up in. One of my dining companions looked like he might.

Mains, like the dry-aged bavette (an unquestionable off-cut value at $17), are given a standard setup: a board with a fresh tangle of frisée, pickled onions, and almost-crunchy English peas that I found myself reaching across the table for, the bitterness of frisée playing against the light tang of a lemon juice dressing. Under the meat is a swish of puréed eggplant that has been fire roasted, the char folded in for sultry, purple-black color. The steak was cooked to a perfect medium rare; a pork chop on another night arrived more gray than pink. 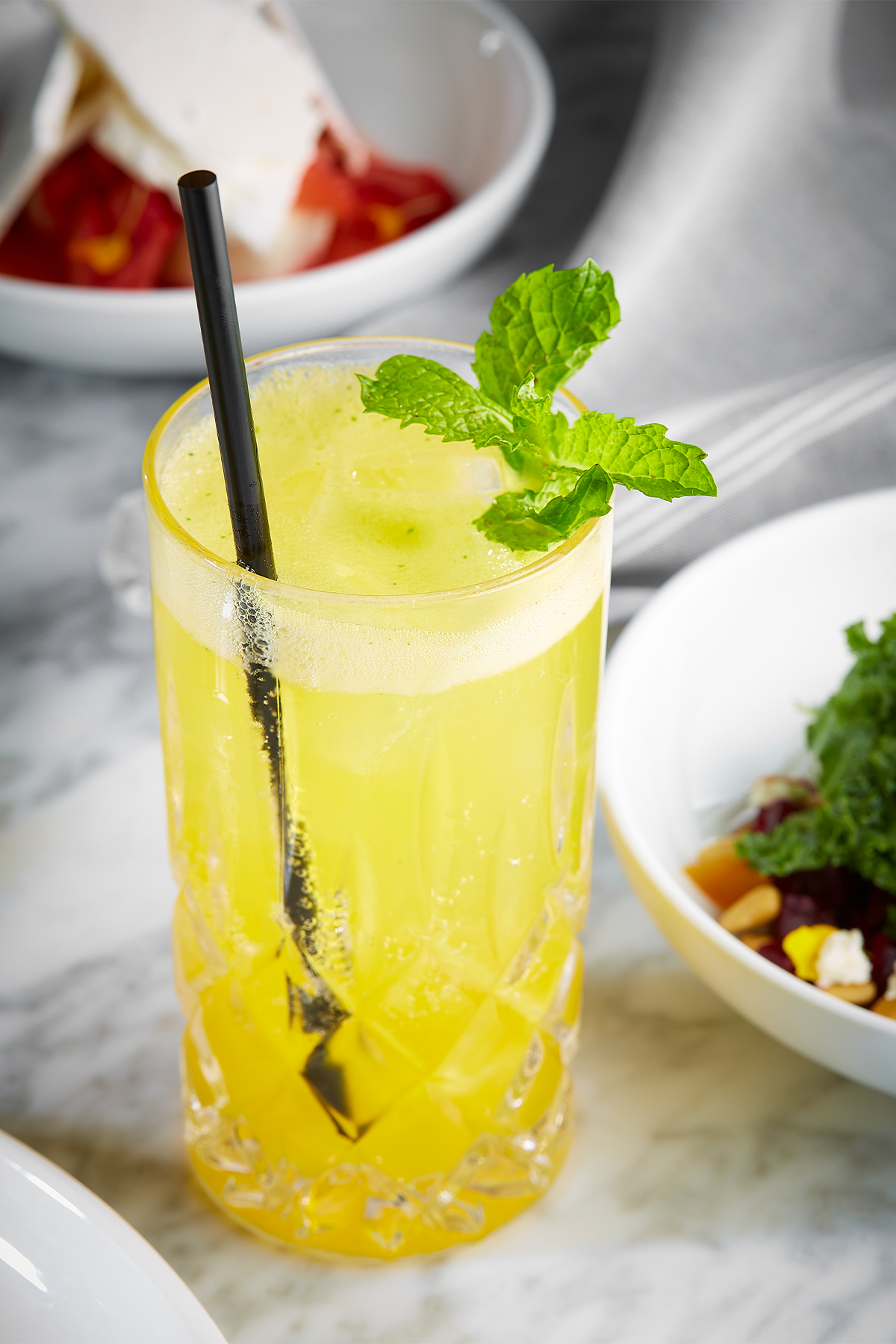 All of my visits involved a fair amount of chaos around the edges, in fact. One evening, our server offered, unbidden, to course out our dishes and then delivered the second wave while our table was still covered with the first. Rushed, we faced an onslaught of new flavors. Another night, we were offered no utensils and then soup spoons for the whole fish—three of them for the three of us, as though that might be useful.

In one tragicomic moment I will not soon forget, one of my guests set about mangling our half chicken, sweating, looking bashful. When I asked for something that might actually cut, I was offered a barely more serrated knife. It was a dry bird, ultimately. Had they really wanted us to eat it?

Like the cacio e pepe, the preparation of porchetta—slow-cooked pulled pork with fennel seed, garlic, lemon, and more salsa verde to cut through the fat—might surprise some used to seeing it as a roast. And the dessert that was billed as strawberry shortcake was instead more like a deconstructed Pavlova (with meringue shards) plated with angel food cake and whipped cream and strawberries. A run-of-the-mill peach semolina cake could have doubled as a pineapple upside-down rum cake without bothering to make a point about the semolina. Why the subterfuge?

The service, part dizzy, part heavy-handed, seems to have confused ideas about what diners might want or need, but is nonetheless pleased with itself in the smug way that only extremely hip places can be. “Be honest, was it really delicious?” our server asked one night, seeming sure he knew the answer.

The truth is, with my glass of slightly effervescent, skin-contact Chenin Blanc, I found myself feeling a hollowness behind the stylized veneer. With hospitality that skimmed the surface, any given meal might be well executed for the most part. But whose food is it? I wondered, as I left one evening and walked by two women posing in front of the neon Paradiso sign, glowing like a beacon in the Oak Cliff night. I had tired of asking for spoons and other utensils and flagging down servers by the time I finished my last visit. And, really, my favorite haunt in the trio is Good Companions, the simplest spot, a little house that serves good coffee and pastries.

Let the pretty people have their paradise.