On this Friday night, the sky is moody. Perhaps because of the impending storm or maybe because my soul is restless, I’m drawn to Deep Ellum, and I’m going to On the Lamb. Under the sign of a lamb sporting an eye patch, the place comes off as more bar than restaurant, a dark, exposed-brick corridor lined with a full wall of liquor. Two doors down from Big Guys Chicken & Rice, which serves troughs of sauced meat and rice until 4 am, On the Lamb opened quietly and, for months, hovered under the radar.

The way Demers describes it, the period between his leaving Oak, where he had been chef de cuisine, and the opening of this collaboration with co-owner and friend Anton Uys was a kind of vision quest. Demers needed something new to help him decompress after eight years of high-profile cooking, a stretch that included time in the kitchens at the Rosewood Mansion on Turtle Creek, Stephan Pyles, and Spoon. I imagine him holed up in the months preceding On the Lamb’s opening, tending charcuterie in the space’s crepuscular recesses: biltong, a South African beef jerky cured with coriander and black pepper; lomo smoky with Spanish paprika and chiles; duck pastrami brined and cured and smoked over white birch.

People may not quite know what to make of it, this place where you perch for a drink and are suddenly contemplating seared foie gras, or an amuse-bouche of a smoked oxtail empanada with brown butter.

Cured meats feature prominently on the menu, as do off-cuts. There are no tenderloins or racks. On my first visit, I found lamb boudin that burst from its casing, creamy and spreadable as it should be, soft and powerful at once, with a relish of finely diced cucumber and raw green beans to parry with the lambiness. It was the first dish I had, the first dish I loved, and one I thought about long after I left. It was inspired by Demers staring at a cutting board of lamb’s liver.

Another night, rockfish (for all the meat on the menu, Demers is excellent with fish) was paired with chicken “oysters,” that strangely intimate part of the bird, usually reserved as the chef’s reward: twin morsels of dark meat you have to excavate from the base of the spine. They came crisped with yellow mole, pink peppercorns, walnut gastrique, and green tomatillos that had briefly seen the grill. I found the dish wildly perfect, the kind that earns you the title “chef’s chef.”

People may not quite know what to make of it, this place where you perch for a drink and are suddenly contemplating seared foie gras or an amuse-bouche of a smoked oxtail empanada with brown butter coming at you out of the gloom. Is this a bar with good food? The incongruities are part of what makes the experience delicious, what made me stop and pay attention, what makes it  fit a changing Deep Ellum.

Demers cooks like a musician breaking into a solo, doing his own thing. And like a hotshot musician will sometimes do, he occasionally strays a little too far from the melody.

Perhaps because he grew up in a Greek-leaning household, eating lamb and dolmas and feta and anchovies, drinking watered-down ouzo, Demers likes intense flavors and resinous herbs. Basil flowers crowned a dish of gorgeous prawns, grilled peaches, and chanterelles served over a basil cream. The volatile flavors registered on my tongue like a psychedelic flash—the beautiful ingredients had picked a fight. The same thing happened with a salmon tartare aggressively accented with mint and lime.

Demers is not a bad boy, though he might seem like a bohemian enfant terrible, a bit of a provocateur. In the tiny open kitchen, he and fellow chef Marc Davis cook while jamming to loud guitar rock, headbands holding back wild, unruly hair. They look at times like they’re just hanging out, surprised you’ve entered.

But there is no iconoclasm. Demers straddles an interesting divide where the rough meets the highbrow in a personal alchemy.

Things take time. The team is small, the service laid-back. One evening the pasta machine broke, the only attachment that worked was for fettucine, and so we had lamb neck fettucine, not pappardelle. But it was delicious, the sauce a delicate work of fortified duck stock and butter.

French technique undergirds dishes whose classicism would surprise you were it not for the fact that the fundamentals are unmistakable; you taste them in every dish. Ducks come in whole. Demers roasts the bodies for stock, renders the fat for confit. It’s a 50-seat restaurant with a half-dozen classical stocks.

I deeply loved a dish that came in one of the tagine-like clay pots stacked by the open kitchen. Sherry lentils were topped with merguez (a spicy-savory lamb sausage, shaped into a patty) and a duck egg, the dish smoky and rich and nicely executed. The lentils were cooked in mushroom stock and finished with veal stock for an effect so creamy that I thought it had to include crème fraîche. It’s the depth that plays tricks on you. 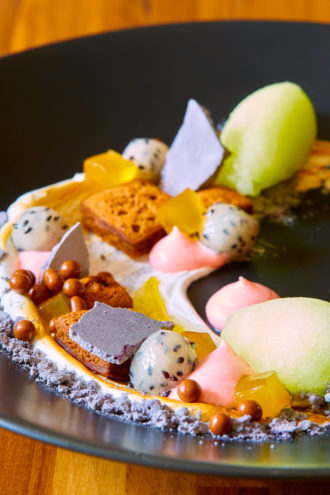 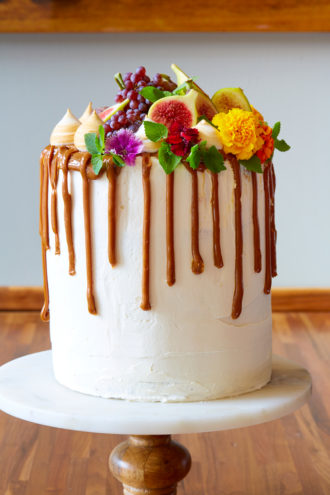 The kitchen also pulled off a salmon “Bourguignon,” the fish replacing meat on a French country plate surrounded by cipollini onions, carrots, potatoes, and peas, each vegetable brought up in separate sauté pans and reunited over a smear of classic beef demi-glace. It was a Bourguignon re-imagined for summer.

Then there’s the lamb sloppy Joe—a rich lamb ragout served on a buttered bun, the richness cut with house pickles, the bun skewered with a Castelvetrano olive—to quench your hunger on a night when you’ve felt the call of the wild.

In this setting, you will not be surprised—or maybe you still will?—by the creations that come from the tiny corner where pastry chef Francisca Lang competes for space with a standing mixer and glass cake domes. Lang, who also worked at Oak, emerges from the penumbras with impossibly tall slices of cake, tiered and fanciful. A fig and olive oil cake’s crumb was rich and coarse with pistachios. I did not understand the avant-garde deconstruction of chocolate stout cake with mint meringue, passion fruit ice cream, blueberry “caviar,” and droplets of matcha gel the color of alien slime. But I was enchanted by a creation of chamomile and honey with soft insinuations of white chocolate that looked lunar in the dim light of the bar.

As with Demers, Lang’s vision was not always my vision. What does she intend with honeydew and dragon fruit? Their creations often surprise you. You’re not sure what’s going to happen next at On the Lamb, but maybe that’s the point. It’s why this is a place to come when you’re in the market for adventure, next time your spirit is restless and questing.