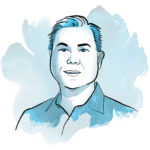 It would be easy to assume that after graduating from SMU’s Cox School of Business, Daniel Moon would have stepped into a role with the family company. Its Sam Moon Trading accessories stores had become fixtures in North Texas, attracting both local shoppers and out-of-town visitors. But instead, his father insisted he attend law school—a decision rooted in an unfortunate experience in Nashville, where a ground lease lawsuit left the elder Moon bankrupt. “My dad lost everything because of that lawsuit,” Moon says, as we mull over the menu at Oma, an Asian eatery inside the Renaissance Dallas at Plano Legacy West. A self-confessed foodie, he interrupts his story to lean in and ask, “Do you like flavorful food?” When I nod yes, he suggests we share a bowl of crispy Brussels sprouts dressed in a syrupy chili sauce. (I’m glad he did; they were delicious.)

Hotels on the Horizon

After graduating from the Dedman School of Law, Moon became general counsel for Moon Group. In the last several years, he has led a transformational change at the company. Between bites of our salads—mine a tangy beet and goat cheese; his salmon over kale—Moon shares how the family went from wholesalers to hoteliers, with a collection of Marriott properties now in the mix.

Whether it’s a fast-casual lunch date or a celebration with family and friends, Sam Moon Group Vice President Daniel Moon prefers local one-offs that are exclusive to Dallas-Fort Worth. The hotelier gave us a taste of his favorites–and we’re sharing.

Located near the Moon’s Dallas office is Korea House. Daniel raves about the Royal Lane eatery’s Sashimi salad with Korean dressing, “It’s completely different, and you can only get it at a Korean restaurant that serves sushi–and that’s rare.”

There’s Korean barbecue, and then there’s authentic Korean barbecue cooked over a real charcoal grill. Koryo Kalbi, another Royal Lane restaurant, just so happens to take the old school approach. “You won’t find that in restaurants anymore,” Daniel says. “They were grandfathered in.”

You’d be hard-pressed to find a Dallasite who hasn’t dined at Tei-An­-and it’s a Moon Family favorite. “They have unique dishes you can’t find anywhere else,” Daniel says, adding that its crab sea urchin risotto is a favorite; the Soba Bolognese is a close runner up.

By 2013, the family had opened eight Sam Moon Trading stores but was beginning to feel the impact of the Amazon effect. “We started seeing same-store sales go down, like literally in all the stores,” Moon says. “So we decided to take a pause and see if this was an anomaly year.” During that time, his parents began to consider adding trophy real estate assets to their portfolio. They started with the Coyote Ridge Golf Club and then a full-service hotel—the $120 million Renaissance hotel, which opened in 2017.

Its success led the Moons to develop four additional hotel projects throughout North Texas. Combined, they add up to nearly 1,000 rooms. Three are slated to open this year. The fourth, a JW Marriott, is being built atop a 10-story parking garage in the Arts District, across from the recently renovated Trammell Crow Center. It will make its debut in 2022.

The family plans to continue along the hospitality path—with caution, Moon says. “We’re only going to move forward on future hotel developments if we think they’re a grand slam,” he says. “If they’re all doing amazing, then we will probably pursue additional opportunities. If it’s hit and miss, maybe we take a look and say, ‘Well, why are some of these not as great as some of the others?’ and try to figure that out before we do the next project.”