As poll numbers began to come in shortly after 7 p.m., Lynn McBee excused herself from a conversation with supporters at her reserved election night soiree, held at The Network Bar in Trinity Groves, and headed back to a private room to see the results herself.

For McBee, and eight others vying to be Dallas’ next mayor, Saturday was the culmination of months of campaigning, fundraising, and forum appearances. The night would ultimately end in disappointment for McBee and Mike Ablon, another North Dallas-focused campaigner whose party in Uptown took on a livelier appearance.

But at the start of the night, McBee’s attendees were upbeat. You could, however, glimpse a touch of nervous anticipation in the eyes of the guest of honor as she worked the room.

When early voting results became public, McBee looked strong. Some 6,800 Dallasites had cast their ballots for her, accounting for 14.9 percent of vote. But in an election sure to head to a two-person run-off, McBee was on the outside looking in.

“Well, I’m in third,” McBee said. “We’d rather be a little bit higher, but I’m proud of our campaign.”

A long-time resident of Highland Park, McBee entered the mayoral race last December, after moving to Dallas earlier in the year. The nonprofit CEO, philanthropist, and former biochemist researcher ran on a platform of safer neighborhoods, better basic services, protection against corruption, better jobs and education, and fighting poverty. Throughout her well-funded campaign—she raised the most of any candidate, banking $761,000 and adding to that a $350,000 personal loan to her campaign—she sought out support from women across the city. Judging from the turnout at her watch party, her message clearly resonated with them. 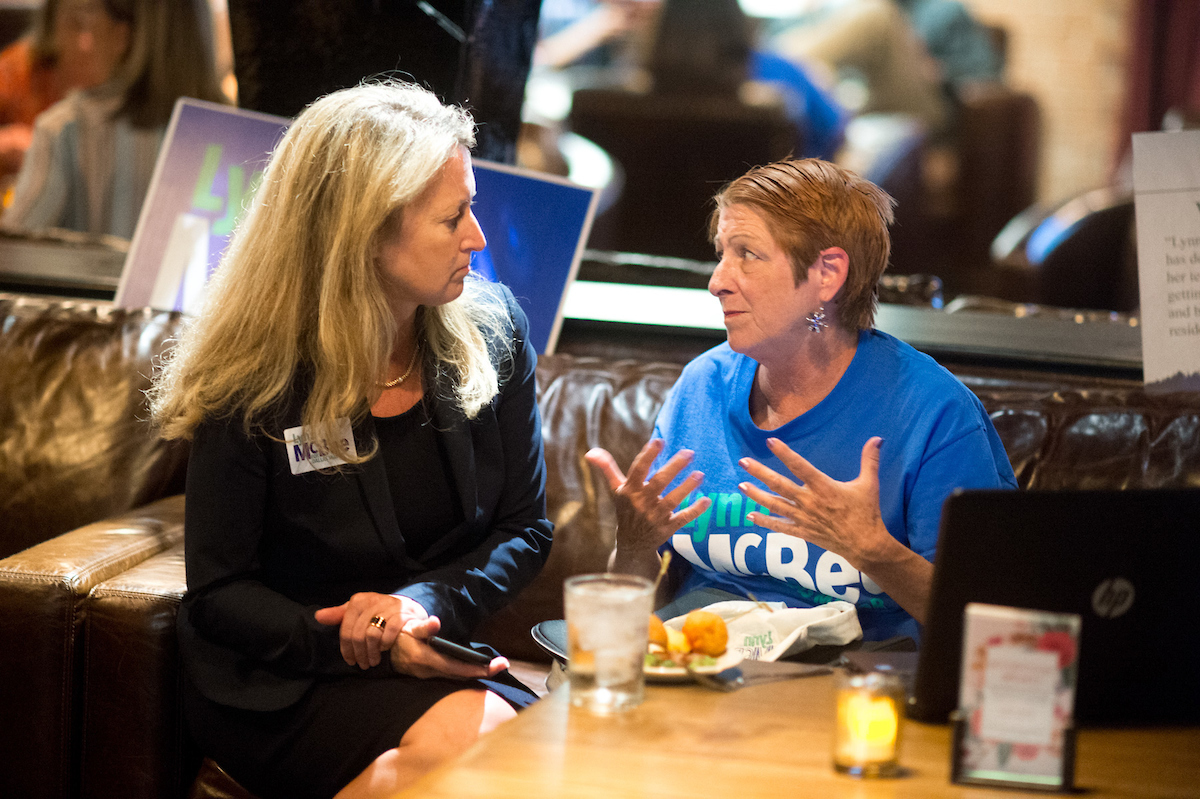 McBee talking to a supporter at The Network Bar in Trinity Groves. (Photo courtesy of Bret Redman)

By 8 p.m., about fifty people circulated the bar, sipping wine, reclining in the broad leather chairs, and eating from a spread at the back of the room. The TVs flickered with a Boston Bruins and Columbus Blue Jackets game and Lil Nas X’s “Old Town Road” played overhead; the predominantly white, middle-aged crowd didn’t pay much heed to either.

“I think Lynn has a great vision for Dallas,” Bluffview resident Cindy Stager said. “I’ve also known her for a very long time and I think she’s the best person to lead Dallas forward.”

The ambiance of McBee’s watch party somewhat embodied the personality of the candidate. Guests were smartly dressed, and took on a reserved but hopeful outlook for the evening ahead. Three miles away at the Katy Trail Ice House, the scene was much different.

Smiling wide, Mike Ablon bounced from conversation to conversation, greeting people and shaking hands. Far from a private event, the Ice House was packed with revelers. There were campaign signs and Ablon supporters wore campaign t-shirts, which is about the only way you could set them apart. Goblets of beer and bottles of Dos Equis dotted the tables.

In many ways, Ablon’s campaign mirrored that of McBee’s. Both raised significant sums of money and loaned themselves amounts in the six figures—Ablon loaned his campaign $550,000. You could find Ablon signs all over the city, but like McBee’s, his campaign centered on wooing voters in North Dallas’ more affluent neighborhoods. It’s not surprising then that Ablon found himself in a similar situation to McBee after early voting returns came in. He was in fourth place with 13.5 percent of the vote.

“Obviously, we’re getting the results in,” Ablon said. “They’re very choppy from different parts of the city so it’s hard to get a full sample set. But [we’re] still optimistic, still like where the numbers are coming in. We’re looking really good where we expected.”

Ablon announced his intention to seek the mayor’s office last November. A principal and founding partner of PegasusAblon, Ablon helped spur the redevelopment of Dallas’ Design District, catering to local businesses and galleries. More recently, Mayor Mike Rawlings pegged him to head up the local government corporation that’s overseeing the development of the Harold Simmons Park inside the Trinity River levees, running from the Ron Kirk Pedestrian Bridge to I-30. Ablon forfeited this position when he filed the paperwork to run for mayor. 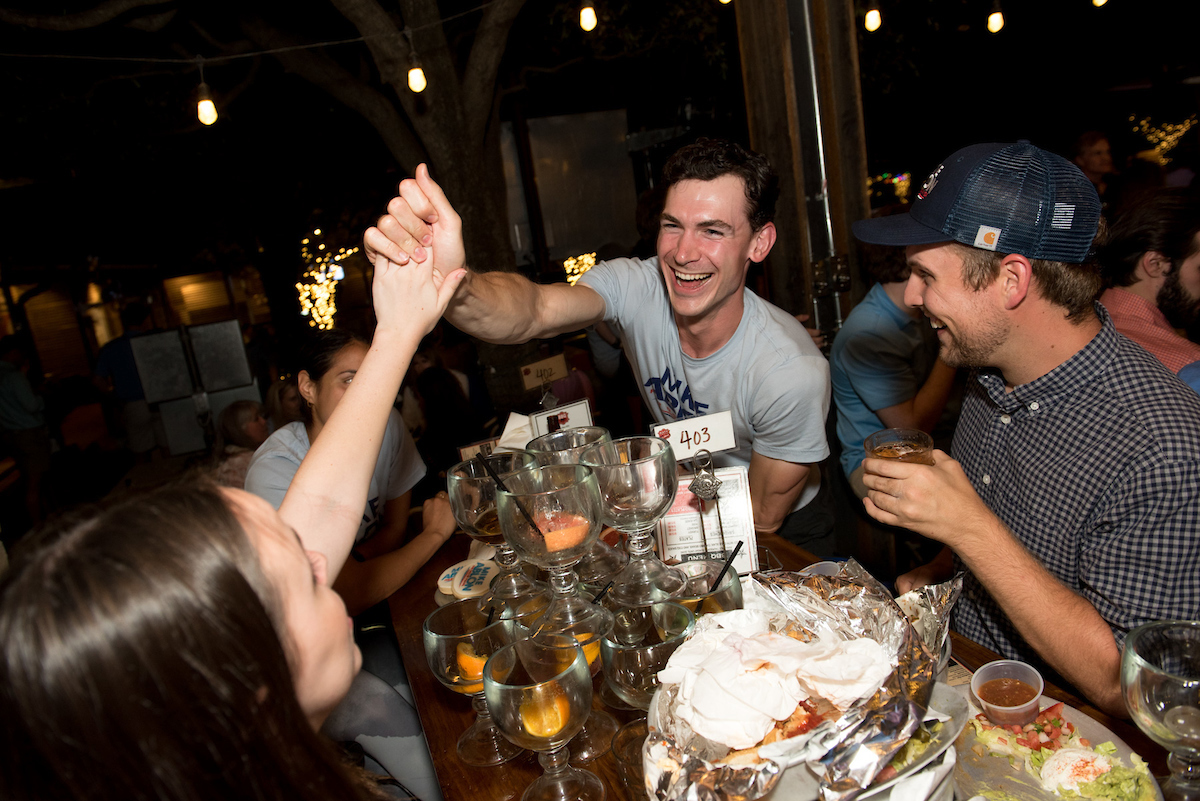 His campaign focused on strengthening and growing neighborhoods. Like all candidates, he spoke out against the corruption at City Hall, proposing a comprehensive list of ethics reforms.

Spirits at the party remained high much of the night—beer helped—but eventually the numbers spoke for themselves. By 11 p.m., with 458 of the city’s 528 precincts reporting, Ablon remained in fourth place with 10,251 votes,  or 13.6 percent.

“I think what we talked about really resonated,” Ablon said. “All the votes aren’t counted yet. It’s getting short—we’re running out of track, obviously, but we’ll see how that finishes up.”

Back across town, McBee’s fate was also becoming clear. Although still in third, her 10,625 votes at the 11 p.m. update weren’t enough to catch Scott Griggs, who had a firm grasp on his spot in the runoff. McBee would finish with 14 percent of the total, with 11,309 votes. McBee and Ablon closed out the night where they started it, in third and fourth place, respectively.

Together, they garnered 22,168 total votes, more than any one candidate. Those will be crucial come June 8, when the runoff election is scheduled. State rep. Eric Johnson and Councilman Griggs, who received 20.3 percent and 18.5 percent of the overall vote, respectively, will be jockeying to bring aboard those supporters. At his watch party, Ablon declined to endorse either of the two remaining mayoral hopefuls, saying that he hasn’t given it any thought. He’s most looking forward to taking a long bike ride around White Rock Lake. As for McBee, she knows what she wants out of the next mayor.

“Someone that’s going to unite our city, take care of people, focus on basics, and just get the job done,” McBee said. “Not be divisive and be a leader that we can be proud of, that has a sense of decorum and civility and takes us to great places.”