In the historic Knights of Pythias Temple building that sits on the corner of North Good Latimer Expressway and Elm Street, a hotel and its restaurant will debut mid-August, if all goes well. (It was slated to open July 31.)

Part of the Kimpton Pittman hotel complex, this flag of the national Kimpton hotel company will have Graham Dodds at its helm for culinary operations, which will encompass the restaurant Elm + Good, in-room service, and banqueting.

Dodds brings with him the same farm-to-table and vegetable-forward focus that has been part of his repertoire since before his opening days at Bolsa.

This will mean, for those who remember the vegan “garden” charcuterie board at the now-closed Wayward Sons, a return of that sleight of hand. There is talk of a vegan mushroom paella—hearty, hearth-cooked, with a trumpet-mushroom chorizo redolent of paprika and pan-seared lion’s mane mushrooms that stand in for scallops—that Dodds concocted for a tasting that wowed and wooed the management in February: enough that it will most likely appear on the menu.

The building itself is steeped in history: Designed by William S. Pittman, son-in-law of Booker T. Washington, it was a hub of cultural, social, and professional activity and a gem in the African American community, with its French Beaux-Arts façade and grand ballroom. (The 1916 building’s brick was painted over for years when it was a Union Bank building; it’s now newly revealed.) The graffitied Deep Ellum tunnel that functioned as a gateway to the neighborhood until it was demolished in 2007 to build a DART line stood at its feet.

You could see it as a metaphor. This emplacement always been the entering point for Deep Ellum. “There’s real synergy with the neighborhood as Deep Ellum changes and enters this phase of revitalization—as we come into the modern age,” general manager Chad Boyle tells me. 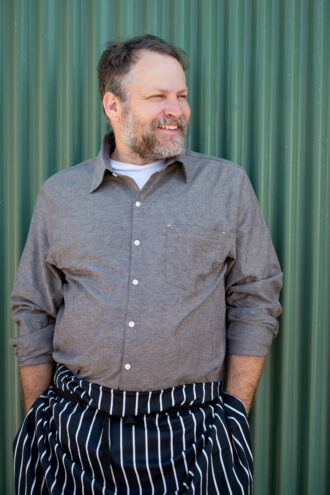 I’m looking forward to what the new American menu might include, because it represents a return to Dodds classics. I’m eager to see and savor country rabbit pâté, but also possibly a tomato tartare in lieu of a steak tartare, with an ingenious egg yolk fashioned from corn (he did a smaller version at Wayward Sons). And salads that reveal his ken for layering local greens with ricotta salata, tossing them into the most fresh and effortless creations. And freshly made pasta, like his agnolotti, or extruded pastas. (The pasta extruder is part of a vast kitchen that includes three walk-ins, a pastry kitchen, and a finishing kitchen upstairs for banquets.) He’s putting up summer’s harvest for the pickle component on the charcuterie board, and his mother is already talking about making her jam.

He’s working with a team that includes cooks who have backed him at Central 214, Wayward Sons, and Overeasy.

The plan is to do something approachable. Versatile, yes, but hopefully still imbued with voice. Craft breweries and cideries will flesh out the brew list, and the wine list will feature varietals like Hungarian furmints or Argentinian torrontes among the whites; barbera, cab franc, carmagnere, grenache, and nebbiolo among the reds—the usual modern line-up. (They’ll feature about 120 bottles, starting around $30, with a sweet spot around $65-$85.)

One advantage to the bones of the place, its warren of small rooms, is its propitiousness for social distancing. It was practically built for it. “Just the sheer size of the dining room and the way that it’s set up and broken up into little rooms,” Boyle says, will help to spread diners out.

They’re seeing the opening menu as a limited menu, with lunch and brunch to come, and a moving towards things like oysters, shareable plates, and large-format drinks. Those are part of a brave new tomorrow. For now, the opening. The opening is enough.

By the by, Dodds spent time prior to gearing up for menu development an hour drive south of Deep Ellum in Corsicana, weathering the first part of the pandemic sheltering in place on a farm. There, he lived in a small RV, feeding the rabbits and chickens and witnessing the birth of spring’s newborns. “I’d always wanted that,” he says. It reminded him of his time as a chef at Shelburne Farms in Vermont, when he lived in a pop-up camper for a season and grew produce for the inn where he cooked, walking through the woods to work. In Corsicana, “there were a bunch of goats being born, and it was all at once, too. That was cool. It was neat to be part of that,” he says.