The Scoop: Kitchen LTO to Reopen, SusieCakes Expands, and More

Your weekly helping of Dallas food news.
By Catherine Downes | October 18, 2016|11:30 am
Advertisement

Kitchen LTO to reopen: The “permanent pop-up” restaurant, formerly located in Trinity Groves, will reopen in Deep Ellum at 2901 Elm St. “I think Deep Ellum is perfect for a chef-driven restaurant with raw and rising talent in an area of our city that is especially supportive of independents and artistic endeavors,” says Kitchen LTO founder, Casie Caldwell. “The space is intimate and purposely designed like a gallery which will allow the chefs’ food and artists’ work to be the star of the show.” Executive chef, Josh Harmon, will work in the kitchen for the first six-month rotation. According to the release:

Born in Tennessee, raised in Texas and graduating high school in LA, he was exposed to an array of different cultures that would play a big role in the way he cooks today. Harmon has trained and staged in some of the best kitchens in the states, from David Burkes’ Townhouse, to Buddhakan in the Chelsea Market, Le Cirque in the Bloomberg Tower to Grace in Fort Worth as well as FT33 and Driftwood in Dallas.

When Harmon returned to Texas in 2012, he became Chef de Cuisine at The Milk & Honey Co. where he received multiple accolades. The Star Telegram said, “Its kitchen is turning out some of the area’s more progressive and imaginative nouveau Southern cooking”. After leaving Milk & Honey in 2013, Harmon went to Grace and worked as Chef de Partie with Chefs Blain Staniford, Victor Villarreal, and Ryan Martin. In 2014, Harmon took the Lead Cook position at Savor in Dallas with Chefs Matt Hanke and Joe Sigliano. He most recently created the new seasonally driven globally influenced French menu at Main Street Bistro & Bakery in Grapevine.

Ellie Visconti is serving as art curator for LTO’s rotating gallery. Visconti is a 15-year veteran of the Dallas design and art scene has selected Melissa Ellis to be the first featured artist.

Check out the menus below: 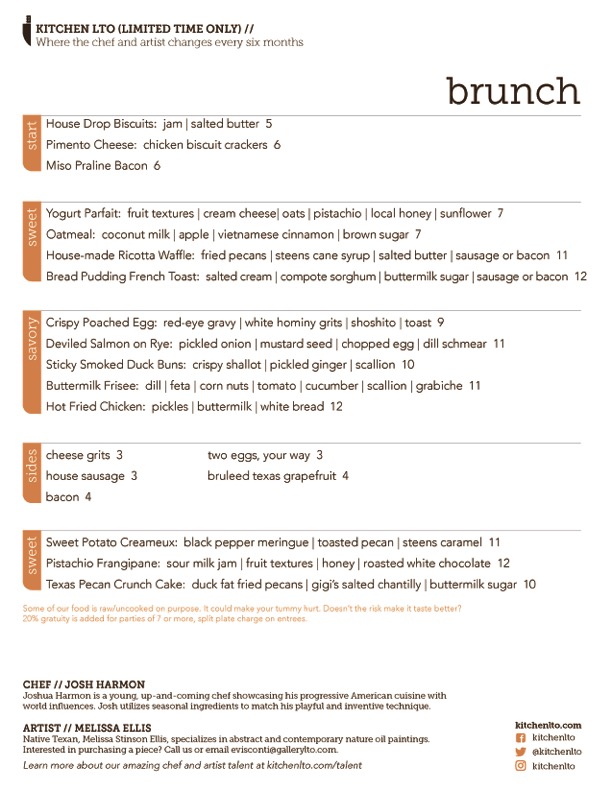 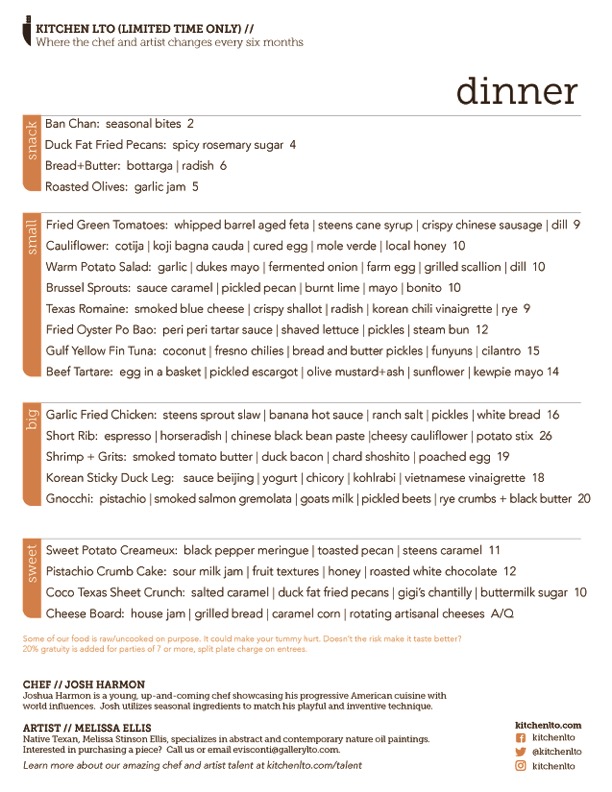 Greenville Avenue Pizza Co. offers new fall barbecue pizza: The new pie is topped with smoked brisket from One90 Smoked Meats, pickled red onions, chipotle-habanero barbecue sauce, and dill pickles. The special is available through October 31 and is $5 per slice.

SusieCakes to open second Texas location: The California-based bakery opened its first Texas location in April at Preston Center. The company is expanding and will open a new outpost on October 29 at Plano’s Preston Towne Center at 4909 W. Park Blvd. “When we were searching for our second location here in Texas, it was important to us to find another location that is a close-knit community and very family-friendly like the our Preston Center store,” says founder Susan Sarich. “We are thrilled about Plano and have already been warmly welcomed by our wonderful neighbors.”

New ownership for Stan’s Blue Note: The dive-bar is now in the hands of Mike McRae and Gabe Nicolella of Fun For All Management, the same company that owns Dicks Last Resort in Dallas, Dodies in Rockwall, and Table 13 in Addison. According to the release:

Even as the bar’s newest owners throw dartboards and a made-from-scratch menu into the mix, Stan’s remains true to tradition. The tap house continues to serve up college football games, the NFL Sunday ticket, and more than 50 draught beers.

“We took a dive sports bar with a great history and we’re giving it a refresher, but nothing about its character will change,” says McRae.

Twin Peaks co-founder Scott Gordon retires: The co-founder of the Dallas-based chain restaurant is throwing in the towel. According to the release:

Scott Gordon, who co-founded Twin Peaks with Chairman Randy DeWitt in 2005, is retiring to spend more time with family and other ventures, the company announced today. Gordon, who most recently served as Twin Peaks President of Franchise Operations, will continue to work with DeWitt as a partner in Front Burner Restaurants, which created and operates several unique restaurant brands including The Ranch at Las Colinas, Whiskey Cake, Mexican Sugar, Velvet Taco, Ida Claire and most recently Sixty Vines.

“I’ve been working hard in this business since my teens and am ready for a change,” says Gordon. “With the pending sale of our Twin Peaks brand, it is the right time to take some time to travel and most importantly, hit the gym.”

There are only two acceptable reasons for this.
By Tim Rogers
Personnel Moves

Van’s Kitchen CEO To Step Down

The new location in Fairview will mark the entrepreneur’s foray into retail, with up to four more locations planned for 2023.
By Kelsey Vanderschoot
D Magazine Directories