The reality star's first two products just hit the market: a gummy supplement to help you sleep, and another to promote digestive health.
By Emily Heft | March 6, 2020|9:51 am
Advertisement
For fans of The Bachelor franchise, Connor Saeli is a familiar face. The Dallasite graced our TVs twice in 2019–first to win Hannah Brown’s heart on The Bachelorette, then for another chance at love on Bachelor in Paradise. Though the 25-year-old was cool and collected on camera, Saeli says he was anxious as millions of viewers tuned in each Monday. When he started having trouble sleeping, he searched for medication to help.

“I tried different products; some worked, some didn’t,” says Saeli. “A lot of them are filled with ingredients [I don’t recognize]. And it’s not fun too feel like you’re taking medicine.” As he researched, he realized he wasn’t alone, that 1 in 3 adults are not getting enough sleep. That’s when the former investment analyst decided to form Sael Wellness to create his own solution.

Saeli says he “went into full development mode” on Sael Wellness after Thanksgiving in 2019, and launched the company just four months later on March 3.

“[I] started by trying to solve sleep issues, but my ultimate goal is to help everyone live a healthier and happier lifestyle in all aspects of their lives,” said Saeli in a February Instagram post. 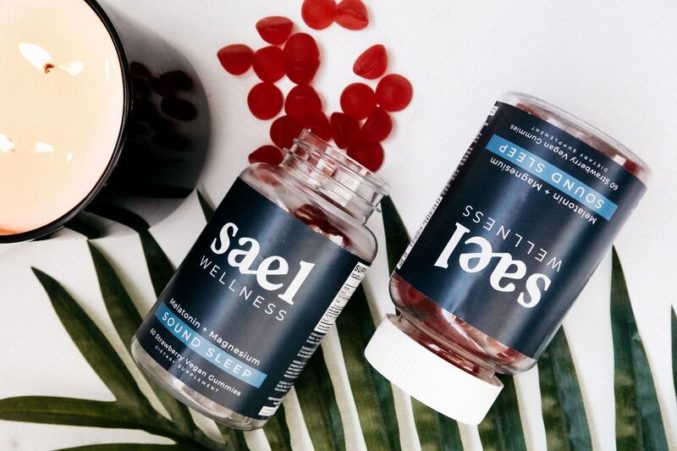 To formulate both gummies, Sael Wellness enlisted the help of an experienced physician–now the company’s chief medical officer–to collaborate with a Florida-based manufacturer. “Our philosophy is that for many health issues, you can solve them pretty simply,” says Saeli. Sael Wellness’ chief medical officer chose active ingredients that are widely accepted by scientists and physicians, like melatonin, to keep the formulas straightforward and easy to understand. Both gummies are vegan, non-GMO, and free of gluten, parabens, allergens, artificial colors, and preservatives.

“[I] started by trying to solve sleep issues, but my ultimate goal is to help everyone live a healthier and happier lifestyle in all aspects of their lives.”

Several other products are in the works, and though Sael Wellness is keeping the specifics hush-hush, Saeli hinted at formulas to support hydration and immunity.

Saeli says he was excited to launch a nutrition-focused company in Dallas because he sees a gap in the market. He’s passionate about healthy eating–Snap Kitchen, True Food, and Flower Child are his local go-to’s–but after spending time in California last year, he realized that Dallas is lacking in nutritious options.

“Dallas is similar to the population in California, in terms of mindset,” he says. “There’s tons of young people moving here. [I’m excited] for restaurants and companies to migrate to Dallas, and [to see] the health and wellness community grow.”

Enjoy Dallas' best trends, hot properties, and tips from local designers to help you nest in style delivered weekly.
The Bachelor The Bachelorette

4 Shopping and Wellness Events to Visit to This Weekend

Fill your Saturday and Sunday with everything from free B12 injections to supporting Black women business owners.
By Catherine Wendlandt
Fitness

Chrissy and Dr. Brian Rudman share their go-to workouts, their favorite healthy snacks, and how they hold each other accountable to meet shared fitness goals.
By Kimber Westphall
Fitness

After a year of livestream workouts, Dallas ClassPass users are eager to return to their favorite studios. Of the 15 most-booked experiences in our region, none are virtual.
By Emily Heft
D Magazine Directories