It was during one of my classes at SMU that I saw the word: Capirotada.

It was my first year in grad school. My first year living in Dallas. I read it in one of those books highlighting Mexican traditions practiced along the northern side of the Texas-Mexico border, customs that seem so foreign and odd to those who aren’t from there. It was a poem about Lent in El Paso—where I’m from.

“I know what that is,” I said aloud and instinctively. During class, I said as little as I could get away with. But for some reason, seeing that word—capirotada—made me forget where I was. Almost as soon as I said it, a classmate asked me to describe it.

“It’s bread soaked in some type of sweet juice,” I said, immediately knowing I should have stayed quiet. It wasn’t that I didn’t know what it was. Rather, I didn’t know how to explain it.

As I tried, I heard my voice stumble. Trying to process my Spanish-language thoughts into English words, I felt lost. It wasn’t until I moved to Dallas that I experienced being at a loss for the right words. That feeling of just knowing there’s always a more exact translation or the perfect word to capture everything one feels.

Often, because I couldn’t speak with the fluidity others had during class, I worried that my way of talking—using the simplest words available—made me sound less intelligent. It wasn’t until I was in class that I realized I had a slight accent. And every time I spoke for longer than a few seconds, I’d overthink things, which made it all worse. 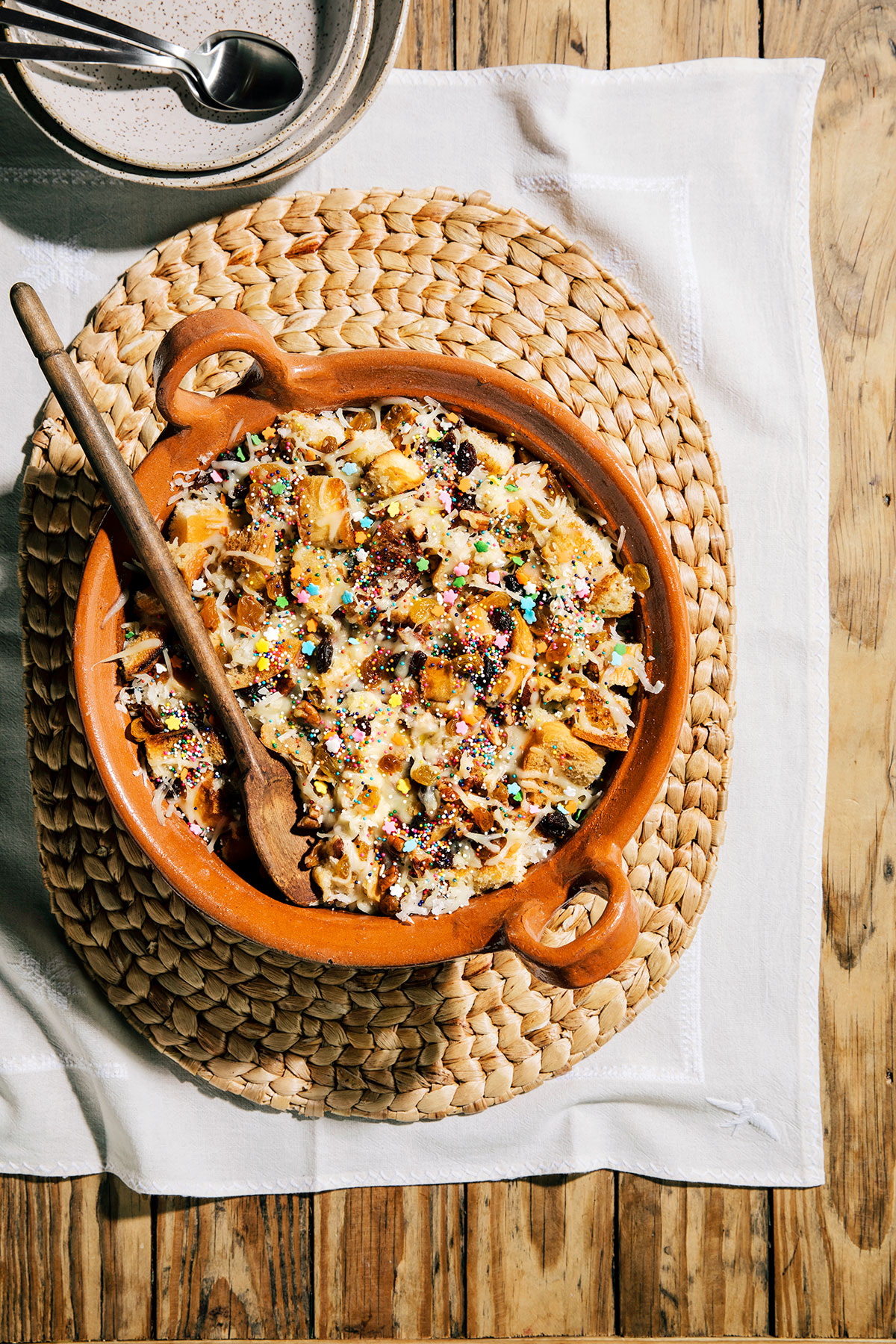 “It has peanuts and cheese,” I finally had enough sense to say. “It sounds weird, but it’s good,” I ended my inadequate description. I felt embarrassed. Until that point, I had never had to describe capirotada. My entire life, I had lived around people who knew what it was. Knew how it tasted, how it’s made. Around people who, if ever I stumbled interpreting my thoughts, could understand if I just said it in Spanish.

That day, after class, I went home and kept thinking. About what I’d said—or hadn’t said, really—but also about what capirotada was. As I often do when lost, I looked online and saw that a website had described it as Mexican bread pudding. But that definition felt too simple. Too bland. It stripped it of its essence.

You could have bread pudding anytime you wanted, but capirotada was the dessert of Lent. Eating it, you could taste the end of winter and the coming of spring. Bread pudding? That was simply that. I could make bread pudding. Capirotada, however, looked and tasted much more complicated. It was something I would never even try to make.

Capirotada was something my mother made, just like her mother and every mother on their side of the family did before them. They made it with care and a process that began a day before they did any real cooking.

Capirotada was something that reminded us of home.

Whenever my mother cooked or cleaned, she’d play music, dance, and sing. “In another life, I would have been a singer,” she’d say, always in Spanish. She sang well and often enough to convince you she believed it.

Besides telling me stories, when I was young my mother used to joke that, someday, without explanation, the government would come and take me. I knew she was joking, so I never felt scared. There were times when I’d laugh. Other times, when in a bad mood, I’d say something like “Call them; tell them where I’m at.”

I was born during a cold morning in late October in Chicago. My mother lived as an undocumented citizen. A few months after I was born, my parents moved back home to Juárez. “We never finished paying for you,” my mother would say. Every place we lived, she’d remind me of their outstanding hospital bill, almost as if that were the reason we moved around so often. “One day they’re going to take you away.”

I hated moving. It meant that I’d immediately lose the few friends I had made. It meant the same old advice from my mother on the morning of that first day in that new school. “Don’t let anyone fuck with you,” she’d say. Always in Spanish.

But more than anything else, I hated moving because it meant that every new place we lived, we had to re-find the familiar.

Language and food were the things we most often found first. If we were lucky, we’d find people who came from the same places. People who understood what we meant when words between languages and regions didn’t translate.

“It tastes like you want to dance and sing at home.” That’s how I should have explained capirotada.

But even when we lived far from home, we always went back during the biggest holidays. Thanksgiving, Christmas, New Year’s—we spent those back home with the family. It was the smaller holidays that we celebrated alone. It was those holidays when we most missed home.

For as long as I can remember, we celebrated Good Friday and Easter. It was part of being culturally Catholic, even if we’d long stopped attending church. During Lent, especially on Viernes Santo—Good Friday—my mother made capirotada.

She’d begin by reducing the piloncillo—raw whole cane sugar—from that solid dark-brown cone into a liquid. Atop the stove’s low heat, she’d simmer water, add a stick of cinnamon, and then the piloncillo. Between singing and dancing and telling stories of where we came from, my mother stirred to keep the liquid from burning.

Once the piloncillo was entirely liquid, she turned off the stove and began layering the bolillo bread—which she had cut into what looked like exact diagonal slices and let harden overnight—inside a pot. She’d cover that with cheese, peanuts, raisins, and bright-colored sprinkles. She’d then pour a bit of the liquid over it all before starting a new layer atop the one she had just finished.

Every family has a different recipe, my mother would say. Some people add fruit. Some make it in the oven; others make it on the stove.

After the last layer, whatever liquid remained she’d pour into the pot. She’d cover it and place it on low heat. The heat made the piloncillo water steam, and the cheese would melt. The steam would also soften the peanuts and cause some of the sprinkles’ color to bleed onto the white bolillo bread that, with the piloncillo, had turned a Peruvian brown.

By the time we ate the capirotada, each bite had a sweet taste, offset by the salt of the peanuts and cheese. The entire dish was the consistency of hardened bread dipped in hot coffee.

“It tastes like you want to dance and sing at home.” That’s how I should have explained what capirotada was.

Growing up, cooking was one of those things you didn’t do as a man. That was left to the women. My mother and her mother before her, and likely every mother on their side of the family before them, understood this. And yet, it was my mother who taught me how to cook.

“No quiero que digan que crie un hijo inútil,” she’d often explain when I complained about having to cook alongside her. She didn’t want anyone to say she raised a useless son.

“This is how you hold a knife,” she’d say, beginning with the basics. “This is how you know when this is ready,” she’d note, sharing some trick of cooking as if it were a family secret no one else knew. “Always clean up as you go,” she’d declare, which meant part of my job was washing dishes. “One day you’ll thank me for this,” she’d respond to my complaints.

Moving so much was difficult for my mother. We’d arrive in a new place and, for the first few days, my mother would cry. Sometimes, when I heard her cry over how much she missed her mother and being around the familiar, I, too, felt like crying. I never did—at least not in front of my father and brother—because that was another thing that made you look weak.

Eventually, we stopped moving. We returned home where my mother sang and danced and cooked alongside family that did the same. But after high school, I kept moving, this time alone. I lived in Phoenix and Tucson, then moved back to El Paso, then back to Phoenix, then a couple of smaller towns across Arizona, then back to El Paso. I moved so much—as if trying to escape something chasing me—that my concerned mother would cry while giving me advice.

“El que no oye consejo, no llega a viejo,” she’d often tell me during those late-teenage years and into my 20s. She knew I was stubborn and proud. Thus, her words. “Whoever does not listen to advice will never grow old.” Or something like that. I’ve never had to translate that either.

I haven’t grown old yet, but I have grown older. My decisions are much more calculated. I appreciate the process more than the result.

A few years after moving to Dallas, I called my mother on an early Good Friday morning. I wanted to make capirotada for my wife and daughter. I wanted to eat capirotada in between hearing my daughter sing and dance and, through that, feel something familiar to home.

Directions
In a medium saucepan, bring 7 cups of water to a boil. Reduce heat and add 3 sticks of cinnamon and piloncillo. Stir until piloncillo dissolves completely. Remove saucepan from heat.

Line bottom of large pot with tortillas (this is so the capirotada doesn’t stick to the bottom). Evenly distribute a layer of bread on top of the tortillas. Sprinkle some of the cheese, raisins, peanuts, and coconut on top of the bread. Add a few ladles of the piloncillo syrup on top. Repeat process until there is no more bread. Ladle any remaining syrup on top. Note: there’s really no specific amount of cheese, raisins, pecans, and coconut to add to each layer, so long as you use it all by the end.

Top the capirotada with sprinkles. (This is mostly for aesthetics; it brings color to an otherwise dark dish.) Cover pot and turn on low heat. Warm the capirotada until the liquid reduces and is fully soaked up by the bread, and the cheese has melted.