Shayley Planas is working through a back-handspring layout on the balance beam, a maneuver where she blindly tumbles over backward, putting her hands down as she throws her feet in the air. She touches down just long enough to leap back into the air for a second backflip, this time without using her hands at all. It is all performed on a narrow wooden support just 4 inches wide and more than 4 feet off the ground.

It’s nerve-wracking to watch, yet simple for Shayley. She became a gymnast when she was just 3 years old, which is early but not unusual in a sport where the retirement age is in your early 20s. Gymnasts—at least those who want to compete at the highest level and go to the Olympics—have to completely commit much earlier than other sports. Most serious gymnasts opt for some combination of private or home schooling that allows them to train twice a day almost every day.

Now 11, Shayley has spent much of her life flying through a gym. She left public school behind in third grade and she spends five to six hours at the gym six days a week. That’s where she is on this rainy Friday morning, inside the prestigious World Olympic Gymnastics Academy in Plano.

Though it is located in a nondescript shopping center, between a tire shop and the Berean Bible Fellowship Church, the gym comes by its distinguished name honestly. Olympic gold medalists Nastia Liukin and Carly Patterson—whose faces adorn two large windows that face the parking lot—once trained there. There are no Olympians here today, but the 31,000-square-foot training center is packed with young gymnasts, from toddlers to high schoolers. Blue and red mats are stacked around the bright space, flanking bars, balance beams, vaults, and springy floor-exercise areas.

Founded in 1994 (and co-owned by Valeri Liukin, Nastia’s father), WOGA is part of an ecosystem formed by a decadeslong pattern of migration. As more young athletes have moved to Dallas’ northern suburbs, more facilities like WOGA have opened. And more hospitals and clinics, like the recently opened Texas Scottish Rite for Children Orthopedic and Sports Medicine Center in Frisco, have emerged to care for them. The latter, too, are packed with kids like Shayley.

Gymnasts are ranked on a long-established scale system, from levels 1 to 10, with 10 being the highest. Elite, the sole level above 10, is where one is considered for the Olympic team. Each level has certain requirements that must be completed on the mandatory events to move up. Shayley competes all over the country at level 8, going against teams from around the world. This winter, she placed third in the all-around (a combination of uneven bars, floor, vault, and beam) at the WOGA Classic hosted at her gym. 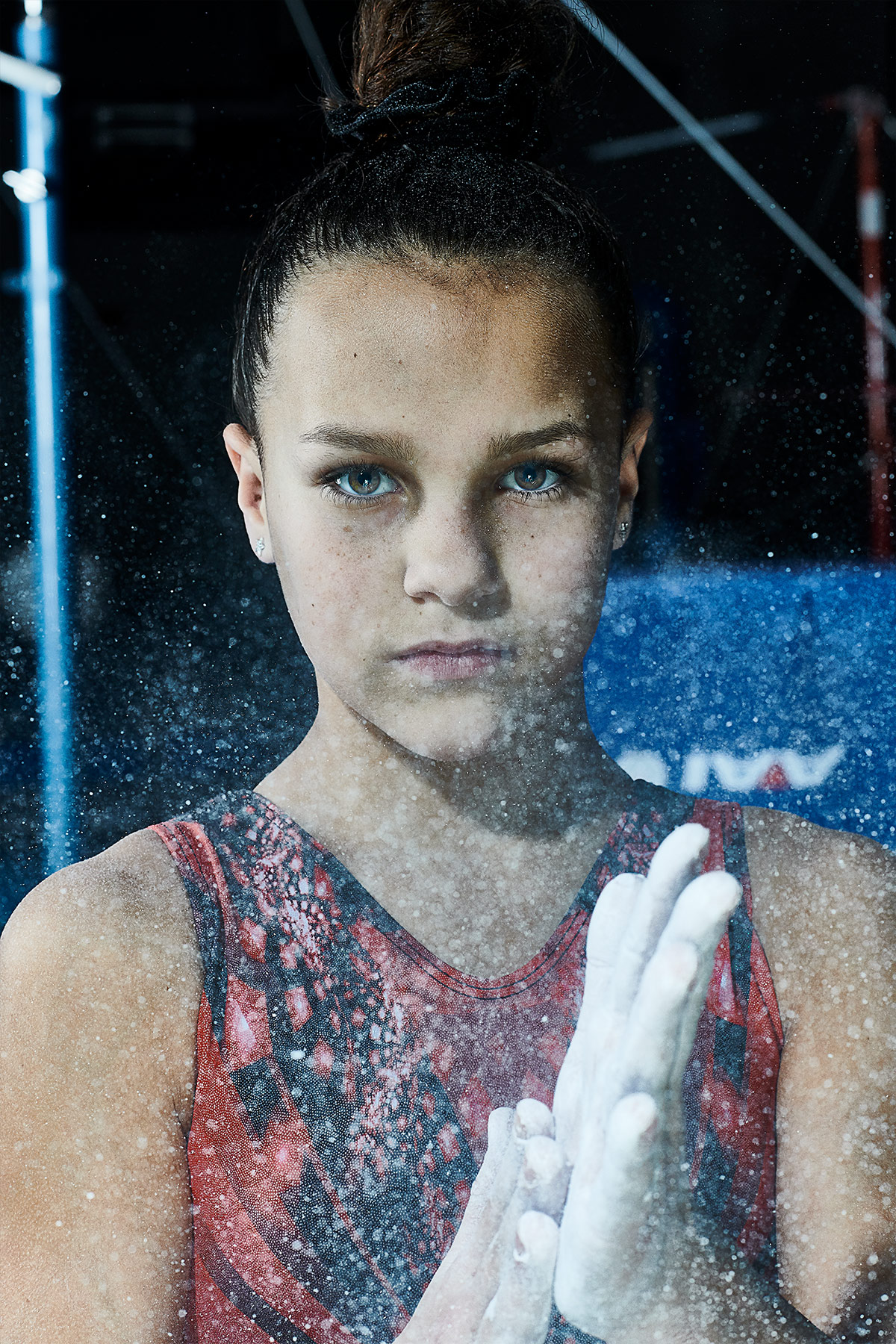 Chalk it Up: Shayley Planas is only 11 years old, but her gymnastics career has taken its toll. She has already had surgeries on both elbows.
Elizabeth Lavin

As is often the case when young people push themselves to such a competitive level, injuries are not uncommon. When she was just 7 years old, Shayley fell off the balance beam, chipping a bone in her left elbow. She had to have a screw put in near her ulnar nerve (the sensitive nerve that is activated when you bump your “funny bone”), and was out of commission for six months. It was her first time in a hospital, and the surgery at Texas Scottish Rite Hospital for Children in Dallas was a bit frightening. She followed up with physical therapy, strengthening her arm until she was ready to get back in action and the surgeons could remove the screw.

Shayley fully recovered, but last summer she injured the other elbow from overuse. She had another surgery at Scottish Rite in Dallas, and as a part of her recovery she went through physical therapy at the hospital’s new Sports Medicine Center in Frisco. For the Planas family, who lives in Allen, the hospital provided a place to rehab and receive treatment that was much closer to home.

“I’m all the way back,” Shayley says of her elbows. “They feel good.”

Dr. Philip Wilson, the medical director of the Frisco campus, performed Shayley’s surgeries. The facility is the base for the hospital’s sports medicine and fracture program and focuses on pediatric sports medicine. The hospital has a large gymnasium built specifically for sports medicine rehab, developmental physical therapy, and even a motion science lab where doctors can capture an athlete’s gait or jumping form. With therapy pools, underwater treadmills, and an imaging center, the high-end facility is a response to demand from the families and sports facilities moving to the area.

Frisco has become a hub of population explosion. It topped the U.S. Census Bureau’s list of fastest-growing cities in 2017, averaging 37 new residents every day. In 1993, Frisco ISD had fewer than 2,000 students and just four schools. Today, 72 schools serve more than 60,000 students.

The sports industry in the area has grown with the population. FC Dallas built its stadium and an extensive network of pristine fields along the Dallas North Tollway. The Dallas Cowboys moved their practice facility to the other side of the highway at The Star. Numerous high school stadiums light up Friday nights, and countless private specialty sports complexes dot the landscape, including those for lacrosse and gymnastics. 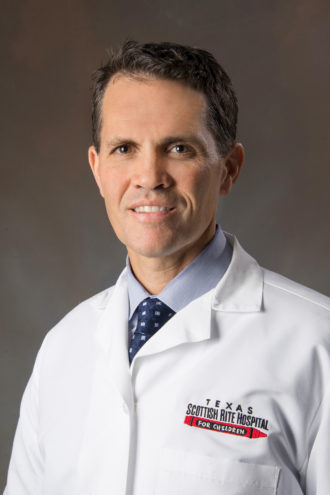 Heal Her: Dr. Philip Wilson is the medical director at the Texas Scottish Rite for Children Orthopedic and Sports Medicine Center. He performed both of Shayley’s elbow surgeries. “We have a long-term partnership with elite athletes,” he says.
Courtesy of Baylor Scott & White

Wilson says Scottish Rite in Frisco has been busy since it opened, with 40 to 60 children a day in the surgery and fracture programs, and two to three times that in the outpatient sports programs.

In communities like Frisco, providers deal with the competing pressures of advocating for the health of the patient while trying to get them back to competition as soon as possible. Wilson says it is a combination of educating the families about the injury and appropriate recovery while getting them back to their sport quickly and safely. Gymnastics, because of the time required, is particularly difficult.

Wilson says that most athletes don’t benefit from specializing in one sport at a very early age, but gymnastics requires intense commitment if the athlete hopes to compete at a high level. There are, however, consequences. “Most sports show that kids who mix it up will have the best chance of getting to college,” he says. “Sports specialization leads to more overuse injuries and higher rates of athlete burnout.”

For athletes like Shayley, who continue to compete while working through injuries, Wilson says that they work together over time to get the best out of the athletes. “We have a long-term partnership with elite athletes and monitor them for overuse.” Wilson, who knows Shayley well, is quick to compliment her attitude and work ethic. “She is a high achiever and motivated, a really bright and infectious personality,” he says. “She enjoys what she does and brings that to the room when she is there.”

Shayley is soft-spoken but energetic when she is in her element here at the gym, her brown curls bouncing with every leap and bound. When asked about her hopes for her gymnastics career, she is quick to answer. “I want to go to the Olympics, and am going to work my way to elite,” she says. Unlike most children who dream of playing at the highest level of their sport, she has the pedigree to make it to the 2024 Summer Games in Paris.

But that is in the future. Her morning workout over, Shayley and her team are cooling down with a few games. The girls are in a circle and take turns jumping in the middle, performing a goofy dance move in front of a teammate, who then mimics the move before taking her place in the middle. The girls are bundles of energy, coordinated and explosive in a way that most preteens aren’t. They follow the dance game by speed-walking around the gym while tagging each other with foam noodles, laughing the whole time.

With the competitive pressure, intense training regimen, monetary investment, and athletic prowess that characterize Olympic pursuit, it can be easy to forget that they are still just children.

Not long after our visit in February, Shayley was back in the operating room, this time for her knee. She needed another surgery to be able to compete at level 9 when the next season begins. Shayley’s mom, Haley, says that the knee surgery, which has a recovery period of six to nine months, went smoothly.