At 46 years old and the height of her career, Brenda Bogart found herself called to retire her interior-design business and pursue art full-time. With little formal art training and no way of knowing if this would be a profitable endeavor, it was, to put it lightly, a leap of faith. Bogart went back to school; fifteen years and many highs and lows later, she’s found her sweet spot in life, represented locally by Blue Print Gallery. 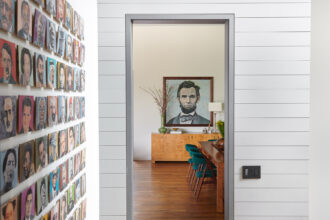 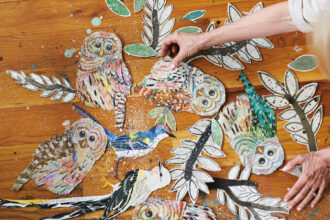 "The entire year of 2020, I did a series of birds—over 100 different birds—so I’m starting off this year with a little series of owls of all different sizes,” says Bogart. This series will be available at Blue Print Gallery.
Elizabeth Lavin

In 2015, Bogart and her husband, Bill, purchased a lot in the rolling hills of Bluffview. Other buyers failed to recognize the potential of the lot, which was located in a floodplain, but the couple had a vision. Bogart’s love for nature not only inspires her art but was the driving force in choosing to build a home that seamlessly blended the interior with exterior. Bolstered with three decades of interior design experience and the help of architect Bentley Tibbs, the couple’s mid-century rustic dream home was born.