When a global pandemic shined a light on supply chain shortfalls, it was good news for Dallas-Fort Worth’s industrial sector.

Already one of the top markets in the country, COVID-19 boosted leasing and development activity. Demand came primarily from e-commerce tenants, third-party logistics firms (3PLs), and food and beverage users. They helped drive up rental rates and push vacancies to near all-time lows.

The pandemic led to a spike in online sales, already seeing steady year-over-year gains since the Great Recession. This spike advanced what distributors refer to as “just in case” inventory and created a surge in demand for warehouse space, says Chris Teesdale, executive vice president at Colliers International. And it shows no sign of slowing.

“I don’t see the demand for industrial space going away, nationally,” he says. “And if you look at North Texas, there are huge benefits to being in our market, and a lot of companies have recognized that. The question is, what will the next five years look like?”

Industry experts say trends to watch focus on technological improvements, like the automation advances happening at Hillwood’s AllianceTexas, plus higher ceiling heights and ongoing shifts in supply chain strategies from a just-in-time inventory system to a just-in-case inventory system.

North Texas is already positioned well to succeed and continues to attract large users, thanks to the region’s central location, robust workforce, pro-business environment, and extensive transportation and distribution network.

The challenges come in development. “Almost every industrial developer in the U.S. is looking at land in our market—or is already here,” Teesdale says. “The challenge they are having is trying to find sites where they can position themselves for a building. … All the land sites are blocked up.”

Denton has been a hot market. Lowe’s recently leased one of the largest available blocks of warehouse space in the area, a nearly 650,000-square-foot building. One challenge Denton faces is a lack of utility infrastructure needed to support further development.

Another big sleeper that has come to life locally is Midlothian, thanks to recent work on State Highway 360. Sunrider International broke ground late last year on what will be a $56 million 1 million-square-foot manufacturing facility in the Ellis County city.

Southern Dallas is also coming on strong, driven by Interstate 20 and the International Inland Port of Dallas. A game-changer will come from a new multimodal container terminal at the Plaquemines Port, about 80 miles south of New Orleans, which is expected to come online in 2023. Union Pacific is planning parallel lines running directly from the port to South Dallas. When that’s up and running, it will push products to the Central U.S. and offer another alternative to shipments coming from the West and East coasts. Dallas developer Champion Partners recently announced plans for a 416,000-square-foot warehouse on Cleveland Road, just south of I-20, and Amazon just leased a 1 million-square-foot distribution center in that same area.

Due to its underlying fundamentals, Dallas has long been a strong industrial market, where bold developers aren’t shy about building on spec. They’re grappling, though, with how to respond to supply-chain disruptions.

Tim Feemster, CEO and managing principal at Foremost Quality Logistics, says decisions focus on the shortfalls of the just-in-time approach, where you could squeeze out inventory and have just enough because demand was relatively predictable.

“Well, guess what, demand is not only relatively unpredictable but so is the ability even to manufacture and to distribute,” he says. “This has shaken up the world from that lean inventory perspective.” 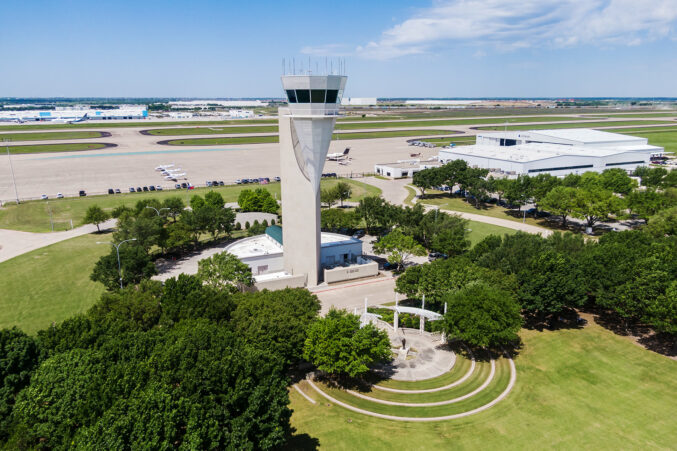 In The Air Advancements in air mobility strengthen DFW’s appeal. Big players like Bell, FedEx, Amazon, and UPS are all located at AllianceTexas.
Courtesy of Hillwood

Amazon may be the big logistics story of 2020 (the company is estimated to occupy about 12 million square feet of space in North Texas), but companies like Walmart, Target, and HEB are also doing big things in technology to become more efficient and automated, says Bill Burton, executive vice president at Hillwood, developer of the massive AllianceTexas in Tarrant County. This will result in “a lot of technology and automation delivered between fulfillment centers and store sites,” he says. It also means that older buildings that were once perceived to be somewhat obsolete could be refreshed as last-mile delivery centers. “You might not have seen that value five or six years ago,” Burton says.

Transportation will continue to be a critical factor in leasing decisions. It makes up about two-thirds of supply chain costs; rent makes up about 5 percent to 8 percent, and wage and labor costs are a little higher. Advancements in automation could also play a bigger role in mitigating those costs, Burton says.

“We have the goods with transportation because of the BNSF intermodal and the airport; now you layer on autonomy, it makes your operation significantly more efficient,” Burton says. “We are trying to get in front of it and be a major player in the arena.”