It’s time we brought this series back (…for the second time). The city is buzzing and the sidewalks aren’t always accommodating. We’re back this week in Deep Ellum and both of the below images are along Main Street, the first at Trunk Avenue and the following at 2nd Avenue. Construction has torn up the sidewalks, pushing walkers into the street. And considering how walkable Deep Ellum should be, it’s a shame that there aren’t safe alternatives for pedestrians who are looking to get past this stuff. 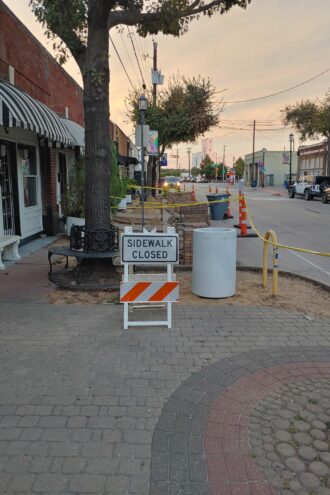 Construction has eaten the sidewalk on Main Street at 2nd Avenue.
Doyle Rader 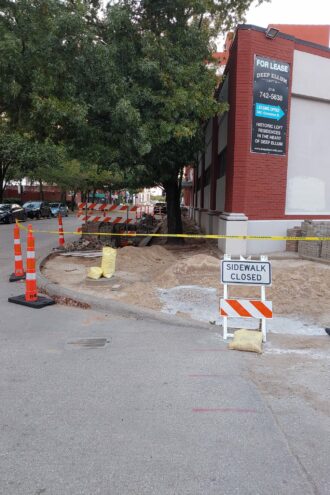 The hopeful news: the City Council earlier this month announced the formation of a Micromobility and Pedestrian Safety Task Force. It will be chaired by Mayor Pro Tem Chad West, the North Oak Cliff representative and one of the council’s loudest fans of pedestrian infrastructure, and co-chaired by Councilman Jesse Moreno, whose district includes the pedestrian-dense neighborhoods of Deep Ellum and Oak Lawn. The task force will include a mix of non-elected appointees. West says it will first “tackle the sole issue of bringing scooters back to the city in a responsible way,” which is super encouraging. Next, West writes that “the task force will review all city policies that impact mobility to bring greater attention to pedestrian and bicycle safety.”

As the city begins to spend money on fixing its sidewalks, it seems like a good time for some guidance about how to provide safe paths adjacent to that construction. Usually, the city is content to allow walkers to find the nearest clear sidewalk. But could this micromobility committee advocate for a better way?