We will have a few posts today to mark the passing of H. Ross Perot, a man whose wealth, talent, and drive arguably left a larger mark on North Texas than any other. To get us started, here’s a selection of stories about Perot that have run in D Magazine over the years:

From the D staff, in 1984, when the magazine named him “Dallasite of the Year”:

Our first Dallasite of the Year is H. Ross Perot, chairman of the board of Electronic Data Systems Corp. (EDS), current spokesman to the ills of public education, philanthropist extraordinaire. A rare man of vision and valor, Perot has called himself a “practical dreamer.” His record speaks of lofty missions idealized and then, incredibly, carried through with precision. To many, Perot is one of a vanishing breed: a true patriot whose decisive actions and sharp tongue bridge the murky waters of politics. His tenure in public life — always as a volunteer — has infuriated some and inspired many.

We chose Perot for many reasons: his unquestioned generosity, his unswerving morality, his daring determination to cut through the system and outline progress. Perhaps the most inspiring of Perot’s attributes is his dogged faithfulness to Shakespeare’s famous dictum: “To thine own self be true, and it must follow, as the night the day, thou canst not then be false to any man.”

From Chris Tucker, in June 1992, a cover story titled “Perot’s Biggest Battle,” as he was (again) considering a presidential run:

In this late spring of our discontent, Perot has eclipsed Jerry Brown and Pat Buchanan as the supreme protest candidate. Whether he will melt in the summer heat or be roasted by partisan flame throwers remains to be seen. He may yet, as he did in 1988, walk up to the edge of the race and back away. If he runs, he may find himself hamstrung like Gulliver by media Lilliputians scurrying after some decades-old remark or tax return. 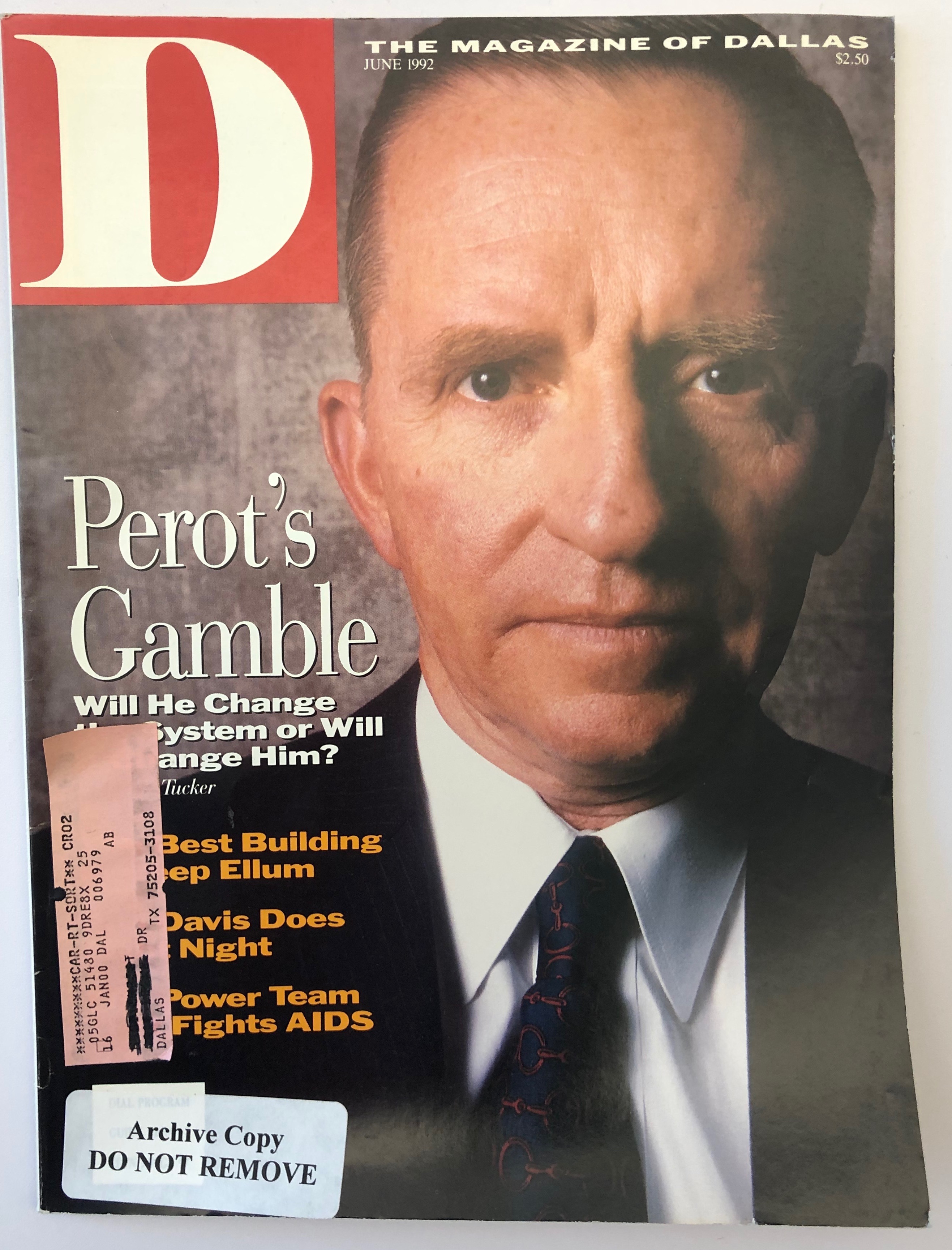 If Perot runs and wins the election, America will have consented to a new revolution. If he loses, as he almost certainly will, he still might bring some dignity and common sense to what is now a degrading, infantile ritual of character assassination. Or, driven by anger and ego, he might use his vast wealth and combative style to pursue a scorched-earth policy against George Bush, making the race a three-way demolition derby. Ironically, the nasty result could alienate even more voters.

From Jim Schutze, in September 1992, titled “How Ross Perot Saved Dallas If Only for a Moment,” about how Perot’s presidential run changed people’s perception of the city:

A Dallas woman who moves in the circles of local wealth and power said to me (only partially tongue-in-cheek), “For many people, I think his candidacy was Redemption. The first time around, when things were booming, we thought we deserved to do better than the rest of the country,” she said. “And then we went through these perfectly awful times since. And here we were, back in the limelight, and it was a kind of rebirth.” She’s certainly right about part of it. Back during the headiest days of the boom, people in Dallas power circles used to say — quite seriously — that Dallas was doing well while the older cities of the northeast did poorly because Dallas was more virtuous. Some of them even felt they had support on this point from certain authorities. (As I write this, I am rolling my eyes skyward and pointing up with one finger.)

Understandably, we didn’t hear a lot of this sort of talk after the real estate market collapsed and the banks failed and the unfortunate business happened with the S&L indictments and … and I really don’t have to belabor this point, do I?

But when Ross Perot began to soar in the polls, it was as if the nation had come back to Dallas like a war-torn lover, ready to pick up the thread and begin weaving the fabric anew. It was, for Dallas, a surprise rendezvous with suppressed emotion and scar tissue.

From the D staff, in 1995, titled “How I Learned to Sell,” in which Perot told a story about his early days selling for IBM and making $500 per month:

“Having Henry Wendler and Gil Jones [two IBM executives] accompany me was a real confidence builder. Additionally, in preparation for the meeting, I stayed up late for several nights reading everything I could about Southwestern and the insurance industry. Being fully prepared also served as a confidence booster to me. When the three of us entered Woods office, I’ll never forget the greeting he gave us: ‘I was supposed to be hunting quail today so I hope you have something important to say.’”

By Joseph Guinto, in 2013, titled “A New Startup, EDS,” about the history of the company he founded:

But at EDS, Perot wasn’t selling computers. The company didn’t even own a computer in its early years. It leased them. At the time, room-size computers were owned either by large corporations, government agencies, or academic institutions. They might be in use during work hours, but overnight they’d sit idle. So Perot paid computer owners to let EDS use the machines in their downtime. The machines were spread out all over the country, meaning that EDS was, soon after its founding in 1962, a national firm.

Maybe that’s why, three decades later, for a story about Perot’s unsuccessful 1992 presidential run, an unnamed local Republican leader told this magazine that Perot “is not a Dallas guy.” By that, he seems to have meant that Perot didn’t care to be part of the city’s oligarchy of business leaders, those ranchers and oilmen with the insular focus on making money in and off of Dallas and the state of Texas. Perot’s vision for EDS, from the start, was national and international.

It was also innovative—constantly creating new “solutions” for all kinds of corporate customers and for Medicare and Medicaid, which would generate billions of dollars for EDS over the years.

From Christine Perez, in an accompanying piece in that same issue, titled “Growing Up Perot,” the first interview that Perot father and son had ever done together:

“We were going around the world, and I realized one of my friends from the Naval Academy was the captain of a nuclear submarine off the coast of Scotland,” Ross Sr. says. “I called him and asked him if, by chance, we could take Ross out on the submarine.”

“It was just like the movies,” Ross Jr. says. “We get on a tugboat and head out to sea. There was this dense fog, then out of the fog rises this submarine. We went down below for about 24 hours, and we were literally being chased. It was at the height of the Cold War, and we were trying to throw off the Russians. For a kid, it was an amazing experience.”

From Matt Goodman, in 2017, a blog post titled “Go Inside Dallas’ Most Exclusive Museum,” when the D staff was invited to tour the new Perot home office and we unexpectedly got to spend some time with Perot himself:

“It’s sure nice of you to come by, thank you!” he says, introducing himself by his full name to all seven of us. Perot is 86 now, and he still makes his way to the office around 8 a.m. and does rounds, bathing in all the sunlight that pours into the new Perot headquarters. And despite these shiny Turtle Creek digs—a three-story marvel of glass and natural light that houses all of the Perot Co.’s business excursions, from real estate to energy to investments and acquisitions—the elder Perot wanted his office the same as it was in Plano. Exactly. Which meant the ceilings had to be dropped.

“It’s identical to what he had,” says his son and Hillwood CEO, H. Ross Perot Jr.