With the nonprofit Circuit Trail Conservancy leading the way, the city of Dallas wants 50 contiguous trail miles that will create a big loop around Dallas. There’s not much to complain about in regard to the big picture idea. The Loop would connect Pleasant Grove with places like Oak Cliff and East Dallas. You could take it from White Rock Lake to the Trinity Forest. The Katy Trail meets up with the Design District. But as we’ve seen recently, things get more complicated when you’re up close.

This week, I called environmental whiz Ben Sandifer to talk about the piece of The Loop he cares so deeply about, the 17-mile Trinity Forest Spine Trail. Specifically, he’s concerned with a stretch from the Lawnview DART station south to Elam Road. Sandifer is by trade an accountant, but he’s also one of the most outspoken members of an unofficial gang of Trinity Forest defenders. (We’ve covered the group’s efforts and talked to Sandifer before.) The group is worried about the Spine. They’re not sure anyone at City Hall knows what they’re doing. And now “value engineering” has entered the city’s lexicon.

Last week, the City Council entered into an agreement to give $20 million in bond funding to the Circuit Trail Conservancy. In doing so, they heard about the challenges facing the Trinity Forest Spine project. The estimates that informed the bond request appear to have been lower than what it would take to build the Trinity Forest Spine to the original specifications. So the CTC and the Park Department will be engaging the Army Corps of Engineers for the project to discuss ways to make it cheaper. “Value engineering” is the dreaded City Hall verbiage.

Sandifer was at Council last week to share his concerns. He could hardly fit them into the three minutes he was allotted. After years of battling the city, Sandifer is not confident that the people looking over the spine trail have the area’s best interest at heart or even know what they’re talking about.

“Out of everybody in that room,” says Sandifer, “I might be the only person who has ever been down there.”

Sandifer calls the proposed stretch of trail between the Lawnview station and Elam the “wildest, most remote, probably most beautiful stretch of the Great Trinity Forest.” He says it is “exponentially more complex in hydrology, archaeology, flora, and fauna than any other previously built sections” of trail in Dallas. He doesn’t want those things disrupted.

When he spoke before the Council last week, Parks Director Willis Winters discussed the three options for the spine trail, each coming with various price tags. 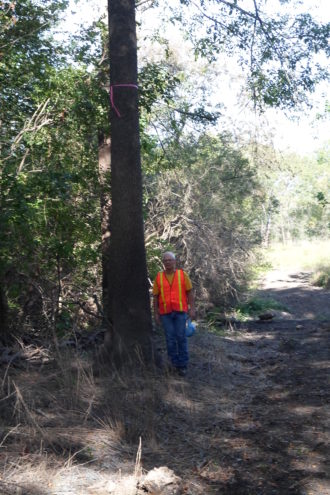 Ted Barker, one of the forest’s defenders, stands near a tree marked during 2015 flooding. Water got as high as 18 feet.
Hal Barker

You could lay it flat on the ground. That would be cheapest. But we are talking about an area that floods frequently. Waters have risen as high as 18 feet above ground within this stretch, according to Sandifer. It’s wet and it’s marshy. Besides being unusable while covered in water, trails that frequently flood cause a maintenance issue. Somebody has to clear away the silt. For obvious reasons, Sandifer does not like the idea of laying the trail flat.

Then there’s option two: putting it on berms over wetland areas. In other words, adding little ridges on each side of the trail. But those ridges can disrupt the ecosystem. “I’m not a fan of that because it would greatly influence the current hydrology that’s down there,” says Sandifer. “There are a lot of subtle plant communities and different things that need the water to flow certain directions.” He says berms also act as a wall for smaller animals, like turtles.

Option three is to build the trail on what Winters called a causeway but you could reasonably think of as a boardwalk. It’s promising, but pricey. “Quite frankly,” Winters told the City Council, “it’s not in our budget right now.”

The money constraints feel less concerning to Philip Hiatt Haigh, who heads the Circuit Trail Conservancy. He says value engineering isn’t the bad word it’s made out to be, that it’s just good sense to see if there are more cost effective ways to produce the same result. “There are areas where you could say, ‘We’ll move the alignment 20 feet to the east.’ Now we’re going to be on higher ground and out of the flood plain. And that could be a value engineering decision.” Hiatt Haigh says there are people surveying the Trinity Forrest as we speak, marking the highest points.

Nobody at the CTC or with Parks will tell you there won’t still be flooding, however. Which means there will be a need for ongoing maintenance to clear silt and the like. The CTC says it’s looking to raise a $10 million endowment to build out a sustainable maintenance team.

“We feel like if we can get an alignment that mitigates many of those challenges as we discussed earlier and is able to be delivered in the timeframe we have, we feel that is a great value we’re bringing to the city through the use of those bond funds,” Hiatt Haigh told me on the phone. “I don’t think the idea we need to wait until we raise enough money to do a causeway across the entire thing is very good because it seems to me we would never get that amenity.”

Councilman Rickey Callahan, who represents Pleasant Grove, echoed that line of thinking last week. His community has been waiting a long time for a trail that connects it to areas of opportunity.

Equity saturates the Trinity Forest Spine discussion. During a committee meeting I wrote about in the first half of February, Councilman Mark Clayton peppered Winters with questions to that end. He was worried that the Spine would get scrapped altogether once all parties assessed the road ahead. He didn’t buy Winters’ assurances. “I’ve been down here long enough to know how it works,” he said then.

And then there were the concerns raised by southern Dallas Councilwoman Carolyn King Arnold, supported by Fair Park Councilman Kevin Felder, that the CTC board does not accurately represent the people that it serves. The board does not have a person of color nor a representative from the southern sector. “As we try to serve people, you oftentimes want to ask people, ‘What is it that you like?’” said Arnold, who represents a slice of Oak Cliff. “They may not have an appetite for what you’re trying to serve them.” The CTC says it will look into adding diversity to the board.

Sandifer wants to make sure that if and when the trail is built, it is done correctly, and that it respects one of the city’s greatest natural assets. One thing providing a small comfort: the Council directed the CTC to return for approval of any value engineering decisions.

The Trinity Forest Spine could be “the signature trail in Dallas,” says Sandifer. “One that could be a regional destination. Hundreds of unique plant species, a thousand year old Native American sites, and over a hundred species of birds call the footprint of the trail project home.”