Kameron talks sober like I talk on an entire bladder of wine.
By Alice Laussade | October 3, 2017|2:24 pm
Advertisement

We all turned to the Real Housewives of Dallas very much in need last night. All for different reasons. But all with a glass of crappy wine in hand. Because that’s what The Real Housewives franchise does—it brings us all together in good times and in bad, paying no attention to race, creed or religion, to drink crappy wine and judge rich strangers who we suddenly think we know personally because we have seen three whole hours of their lives edited together with Dallas skyline shots.

We start in Mexico, where Kameron and Cary are getting ready to go to the beach. Cary shows off her swimsuit, and Kameron says, “I would feel naked, but that would be good. For you.” It comes off sounding just like Rodney Dangerfield shopping for clothes in the golf shop in Caddyshack, “When you buy a hat like this I bet you get a free bowl of soup, huh? Oh, it looks good on you though.”

Cary says Kameron is lucky that she put any clothes on, because she has half a mind to go to the beach naked after all the yoga she does to keep her body in check. Is it the yoga? I haven’t been giving her much credit for her bangin’ body because she’s married to a (Board Certified) plastic surgeon. But she’s doing yoga in every other episode. It must be the yoga. I must take up yoga. The perfect body is now within reach. I’ll never age, and I’ll never have to wear makeup again. I decide to downward dog the crap out of the rest of my life. After I empty this entire bladder of Franzia I’m drinking without a glass because dishes, obviously.

Then, we cut to Brandi sneaking a large dildo into D’Andra’s bag. There are many ways to get a party started. I guess this is one of them. Brandi reveals herself to be quite the trickster on girls’ trips, and says that the last time she was on a trip, she and all of her friends put eggs in their lady parts and whoever “kept the egg there the longest” had their vacation paid for by the group. Brandi claims that Stephanie was there and that, in fact, she won this game. I’m too stressed out thinking about eggshell shards in my foo-foo to process them playing this game, but I’m also confused about why Stephanie would deny winning. Even if I wasn’t there, I’d be like, “Yeah, I won that crap! My gordita has the strength of a thousand suns!” 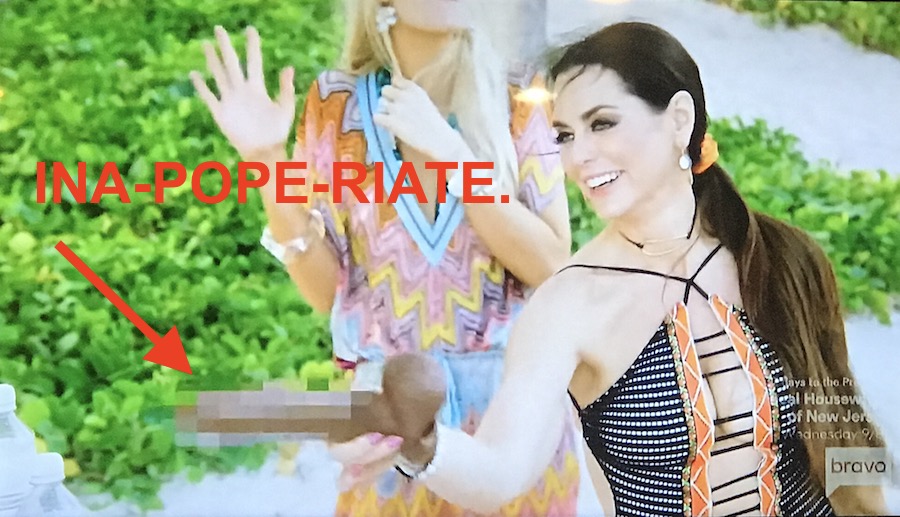 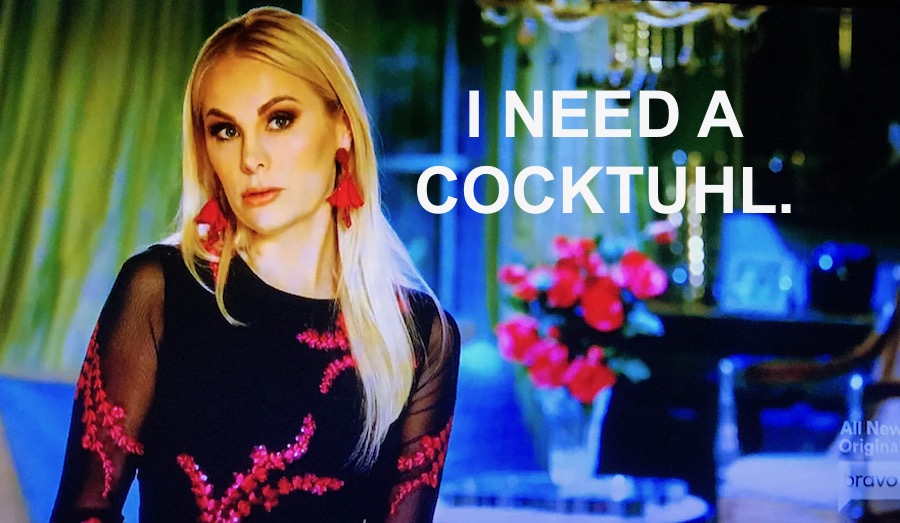 LeeAnne mentions that a problem she has always had with Brandi and Stephanie is that “when they drink together they become… young.” Yeah. It’s terrible. They’re all Young at everyone all the time. Super rude. And v. ina-pope-riate. 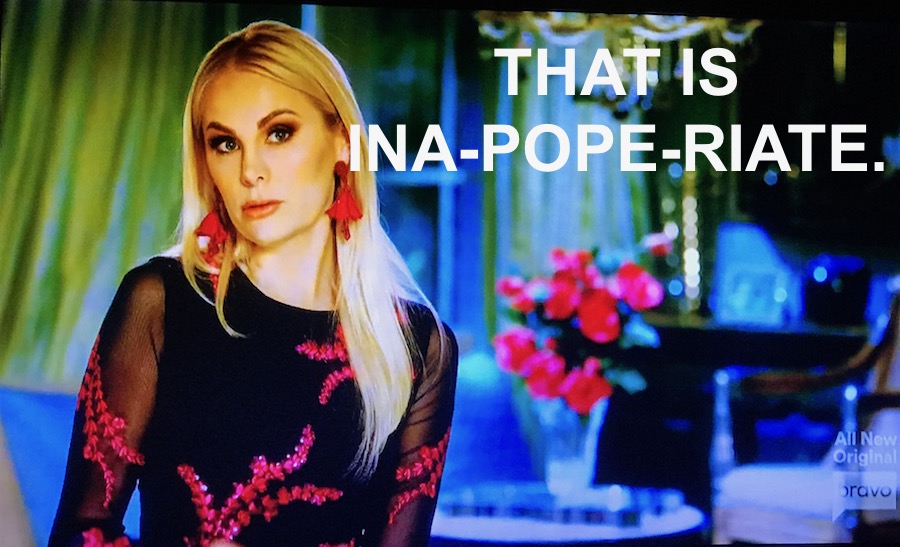 Brandi and Stephanie take a bath in their hotel room together. That sounds way better on paper than it was on the show. Let your mind wander with that, and don’t watch the episode. At least it was impressive that Stephanie’s hair stayed photo-ready the whole time. That’s talent. 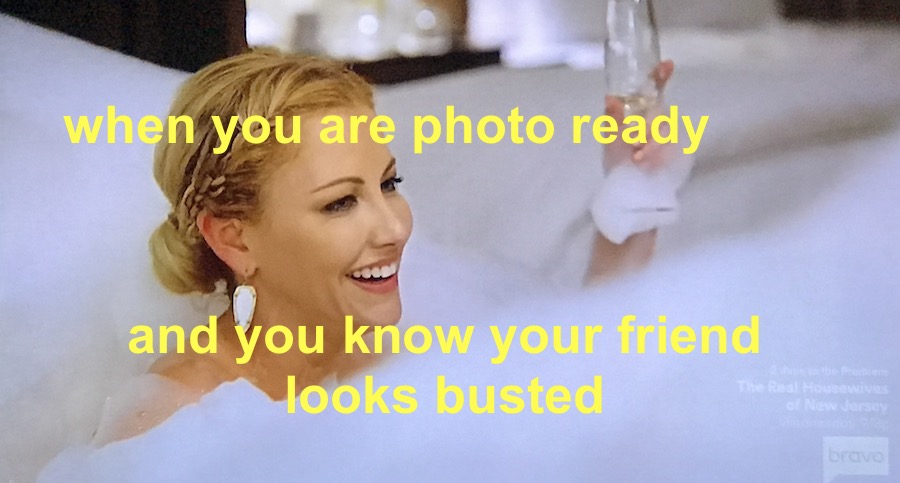 Cut to Kameron saying that she does not go to “schrip clubs.” Then, she and Brandi try to get into a fight about “class.” So Cary stops the conversation with a burp. And then LeeAnne diffuses the fight with the announcement to the group that she is engaged. 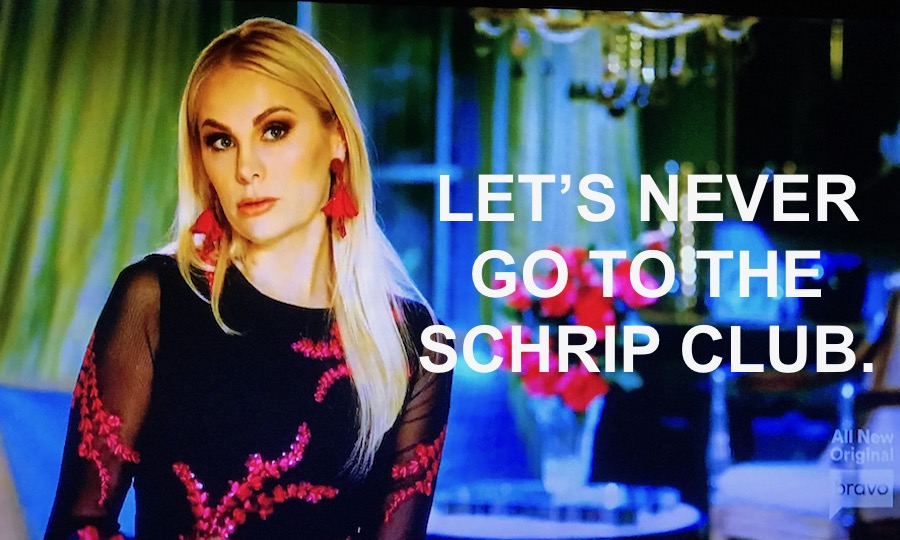 Everyone high-pitched-screams and opens their mouths as wide as they can open, some go all Reach Toothbrush Man hinged-mouth-excited. They are all about as excited as I am to get out of a conversation led by Kameron. 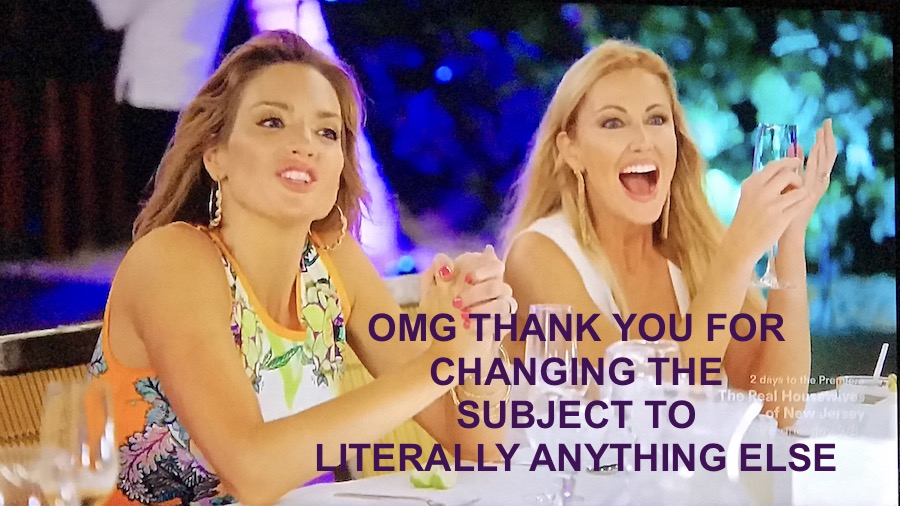 At the end of the episode, things try to get interesting when Cary brings up the gossip she heard LeeAnne spewing. Cary says, “You threatened to strangle me.” And we get this moment of drama, and we’re ready for the bottom to fall out of all of this, and for all the terrible, terrible things LeeAnne said about Mark at The Round-Up to come out into the open, and then LeeAnne just says, “Yeah. I did.”

No explosion. No denial for three episodes straight. No nothing. DAMMIT, Ladies. How are we going to get people to tune back in if you don’t give us some broken china, already?

And then LeeAnne expertly turns the conversation to Brandi and watches as Brandi and Cary start to fight. She cheers-es herself about getting herself out of trouble.

Meanwhile, D’Andra is bored and Kameron is Kameron-ing. Get me to the episode where they bring up The Round Up already. UGH. 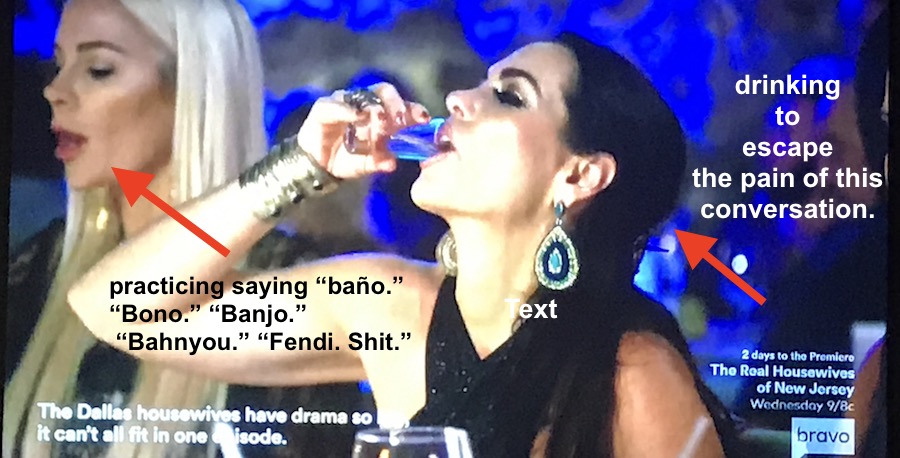 So far, our Dallas ladies have done a terrible job of being Real Housewives on vacation. They need to take a lesson or two from the Real Housewives of New York trip to Mexico: Countess LuAnn lost it on tequila and fell into the bushes, a bunch of them fell into a pool, Dorinda stabbed herself with a knife while threatening another housewife, Bethenny was naked in that pool having a friendship breakthrough and hugging Ramona, and Sonja tried to make out with every last one of them.

With this Dallas trip, I’m watching a fender-bender when I ordered a train wreck. C’mon, Dallas. Let’s pick it up.

Get a front row seat to the best shows, arts, and things to do across North Texas. Never miss a beat.
Real Housewives Of Dallas Reality TV

Let's go to the video.
By Tim Rogers
Arts & Entertainment

The Real Housewives of Dallas Is on an ‘Indefinite Hiatus’

Last night, Bravo announced that its Texas iteration of Real Housewives will not return in 2022.
By Emily Heft
Arts & Entertainment