Think of Diana Zamora as a freelance pastry chef. You might have had her elote flan creations at José or dipped a spoon into her peanut butter cheesecake with cajeta, coconut, and strawberry jam at Encina. Soon, her paletas will grace Elm & Good’s summertime menu.

Last year, especially during the holiday peak, restaurants weren’t hiring full-time pastry chefs but someone needed to ensure that dessert is served. Zamora saw her opportunity. She started doing pastry work at José, Encina, and Second Floor at The Exchange Hall.

Her culinary fingerprints are all over some of Dallas’ favorite restaurants’ dessert menus. Still, she yearned to embark on her own pastry journey. Zamora didn’t want to stay in any one place for too long—“that’s not really my thing,” she says. She needed a home base, somewhere she could really let her creative flag fly, some place Zamora could really dig into the pastries true to her unencumbered style.

“I’m like this chola goth princess,” Zamora begins, which is to say her desserts can take on a split personality—she plays with mezcal and spice in dessert, but adorns them with edible flowers. Despite being allergic to the herb, Zamora loves making an oregano olive oil cake that’s soaked in a guava syrup and topped with a simple vanilla bean whipped cream. It’s desserts like this that represent her pastry modus operandi: full of flavor, even on the savory side, without choking you with sugary sweetness.

Almost like cosmic clockwork, space opened at 3015 at Trinity Groves, a venue with a big, empty pastry kitchen waiting for someone like Zamora to move in. “I was working out of three kitchens—I took all of my stuff from the kitchen at José, from the kitchen at the Exchange,” says Zamora, and moved it all to her new headquarters for Nena Postreria.

You can find Zamora and treats from her Nena Postreria at CocoAndré this Friday, May 7 for an inaugural pop-up. She’s partnering with the Bishop Arts chocolate boutique, which will soon stock Nena Postreria in the shop’s pastry case on a regular basis (slowly, but surely). She’ll also collaborate with the shop, using CocoAndré chocolate in some desserts. “I love mezcal, so my cake—instead of a rum cake—is a mezcal cake,” she says. (And CocoAndré does wonders with mezcal and chocolate, so the team-up feels kismet.)

At the pop-up, Zamora will have a trio of gummy bears, named for her sister’s nickname “Oso Fabuloso,” in flavors like mangonada. “I was like, ‘Dude, if I don’t name these Osos Fabulosos that is a missed opportunity,’” she laughs. There will also be three-inch cake balls, which, when done right, says Zamora, can be really, really good. It’ll have a whipped mousse core in the center of a moist cake with an exterior reminiscent of thin, crackly Magic Shell chocolate—the kind that would harden over scoops of ice cream. 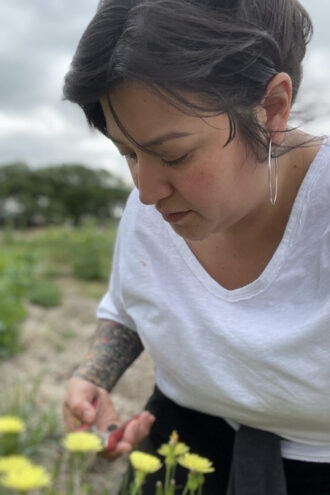 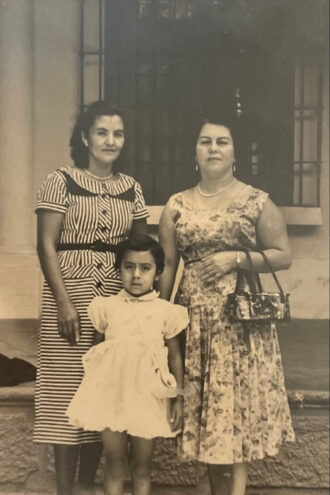 Like the gummy bears, Zamora’s pastries are always deeply connected to her family. Nena Postreria is named for her mother, Reyna Margarita, who everyone calls Nena. She’s a supporter, of course, but also Zamora’s biggest critic. “She keeps me grounded,” she says. Zamora moved back into her childhood home recently to be her mother’s caretaker. And as much as Zamora helps her mother, it’s mom who’s pushed Zamora to grow over the last year. “I don’t know how much longer she’ll be around. If I can honor a little piece of her somehow I feel like I owe it to her.”

She wants to give Nena her flowers now while she’s here. That’s why a lot of Zamora’s presentations use colorful edible flowers. “My mom really loves flowers—her middle name is Margarita, which means daisy, and that’s why I like putting flowers on everything,” she says. Zamora sources her flowers from F.A.R.M. in Deep Ellum, and produce comes from Harvest Project Food Rescue to help reduce food waste, a practice that is crucial to her business model. 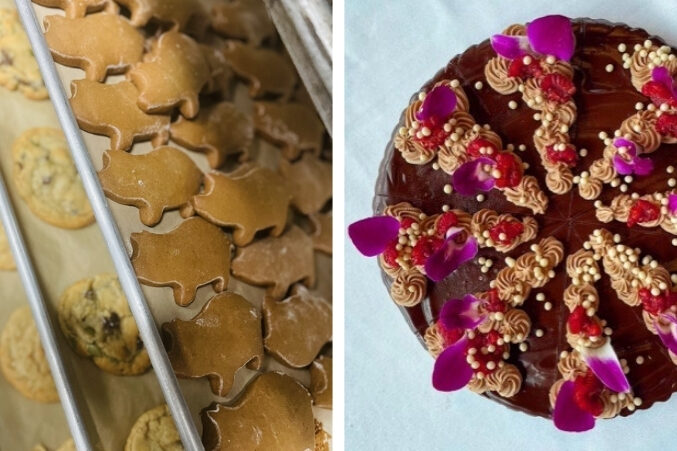 Eventually the goal is to open a proper brick-and-mortar postreria where Zamora’s desserts can shine on the daily. “I made a promise to myself that on my 40th birthday, and that gives me a year, I’ll be standing in my own spot, and I think that’s gonna happen.”

She wants the pastry shop to double as a space to give back to her culture and her community, where young, up-and-coming chefs could run pop-ups of their own someday. “They’ve got talent and they’ve got passion,” says Zamora, and like her “a lot of them are cooking from their roots.”

For now, Zamora will still do wholesale for restaurants—you’ll start to see her pastry work at Yellow Rosa soon, too—but Nena Postreria is taking off. Watch for pop-ups to someday bloom into a pastry shop. With Zamora’s determination, it seems inevitable.